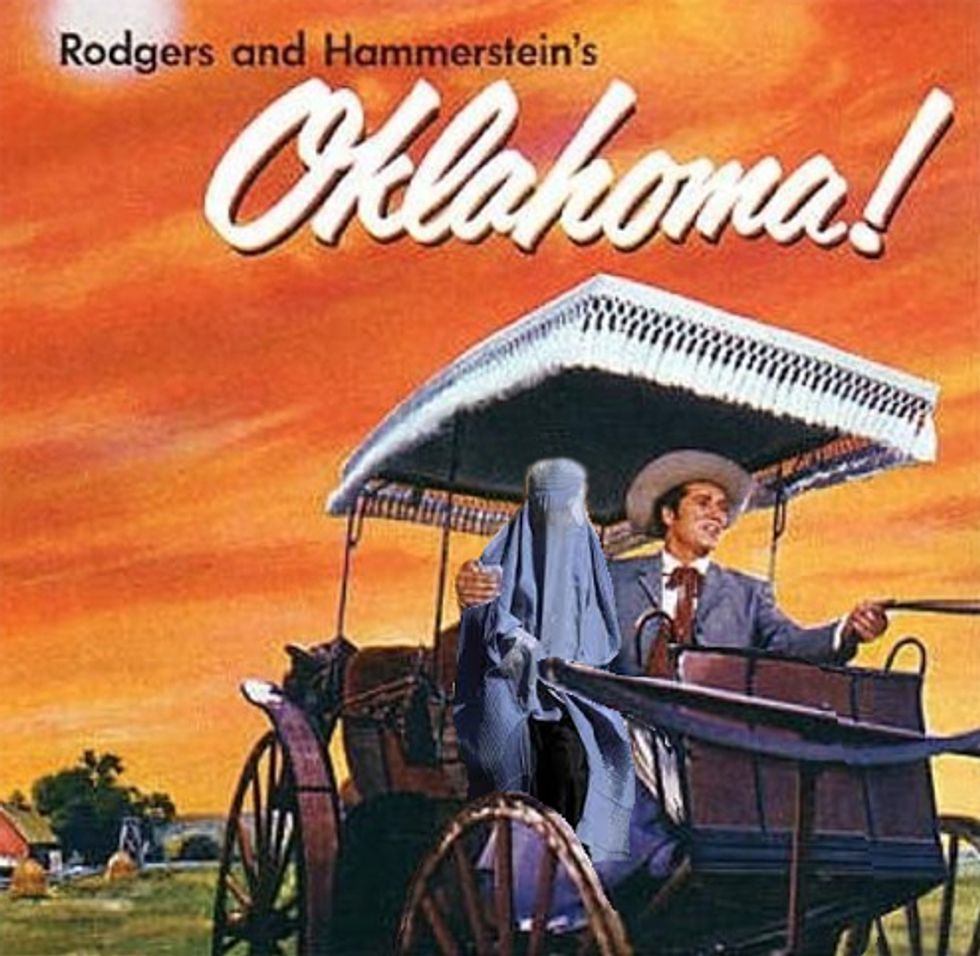 For your "Your Tax Dollars At Work" files, we have this cheery story of an Oklahoma lawmaker, state Rep. John Bennett, who is very concerned about the possible threat Oklahoma faces from Radical Islamic Terrorism, especially the homegrown kind. Now, in a sane world, Rep. Bennett might look at Oklahoma City's memorial to the 168 victims of the 1995 bombing of the Murrah Federal Building and rethink whether the state really has to worry quite so much about its Muslim population, which one 2015 estimate placed at about 30,000 statewide -- less than one percent of the population. But that would be in a sane world, and we already told you this was a story about the Oklahoma legislature, where panicking about Muslims is almost as much a tradition as trying to put up unconstitutional Ten Commandment statues at the state capitol.

Rep. Bennett submitted a proposal to study the

current threat posed by radical Islam and the effect that Shariah Law, the Muslim Brotherhood and jihadist indoctrination have in the radicalization process in Oklahoma and America.

Why does Oklahoma need to worry about Radical Islam? Well, isn't it obvious? Bennett explained that

Oklahomans have already been killed in the name of Islam, so there’s a need and the threat is very real [...] For someone to say we don’t need to do that, they’re either part of the problem or they got their head stuck in the sand. They need to stop what they are doing and either help or just be quiet.

Say, who in Oklahoma has been "killed in the name of Islam"? That would be the poor woman who was murdered by Alton Nolen, a co-worker who beheaded her and seriously injured another worker at a produce plant in 2014 after he'd been fired. The horrific murder quickly became "proof" to paranoids that Nolen was a radical jihadi with ISIS sympathies, although the local DA eventually decided it had more to do with Nolen hating white people than with jihad. Nolen's case still hasn't gone to trial because despite his attempt to plead guilty in February of this year, his court-appointed attorneys argue that he's mentally incompetent to stand trial. But as we all know, only white Christian killers have mental illnesses, while black Muslims are instruments of international terrorism. So there's your wave of radical Islam in Oklahoma: an unstable ex-convict with a history of violence who started attacking people at his workplace after getting fired.

Despite the dubious chances that one of the most Bibley states in the Bible Belt is about to be overrun by Sharia, the proposal was approved last week, in a package including 71 other studies, at a total cost of $50,000. That works out to an average of less than a thousand bucks per interim study, so really, nobody should mind much at all. Except, isn't Oklahoma in such a fiscal crisis it can't afford to cover Medicaid for people who make over $9,000 a year?

The study was approved even though it was opposed by a coalition of over 60 Oklahomans representing a variety of religious groups, pastors, individuals, and community organizations, who sent an open letter in June calling on Oklahoma House Speaker Jeffrey Hickman to nix it. One of the signers of the letter, Rev. Bill Tabbernee, of the Oklahoma Conference of Churches, told Oklahoma City TV station KOCO that he'd support a broader study of violent radicalism in Oklahoma among all groups, but objected to singling out one faith:

Tabbernee believes the fear and study are fueled by bigotry. He would support a study that examines radicalization but not one that singles out one group.

“There are other groups in Oklahoma who present extremist threats. There are 17 hate groups that we know about in Oklahoma,” Tabbernee said.

He said the Muslim population represents less than one percent of the state’s religious groups.

“It seems to me there’s more violence against Muslims than the potential of radical Muslims actually being here,” Tabbernee said.

That does seem rather likely, given the fact that -- at least before Orlando, which is still arguable -- more Americans have been killed by domestic rightwing radical groups since 9/11 than by jihadis.

Oklahoma Lawmaker Definitely Not Racist Against Muslim Islamics, Because Dictionary

Funny thing about Rep. Bennett and his concerns about Radical Islamic Terrorism: He has a habit of getting very concerned about Muslims during election years. In September of 2014, he created a huge brouhaha (from the Arabic word Ba’rou HaHa meaning “fuck-tussle started by a xenophobic chucklehead”) when he called Islam a "cancer in our nation that needs to be cut out," and also warned on Facebook that all decent Oklahomans need to “be wary of individuals who claim to be 'Muslim American.' Be especially wary if you’re Christian.” He denied any claims of bigotry, because you see he's read the Quran and happens to know that "90 percent of it is violence." You just never know when a Muslim might snap and cut off your head, he explained.

But now that his study into those scary Muslims has been approved -- it'll be completed near the end of the summer, just in time for the fall campaign -- Bennett is satisfied that he's doing his duty by his constituents, who are for some reason every bit as terrified of Muslims as he is:

Give it a rest, man. Trump already picked his Veep nominee.