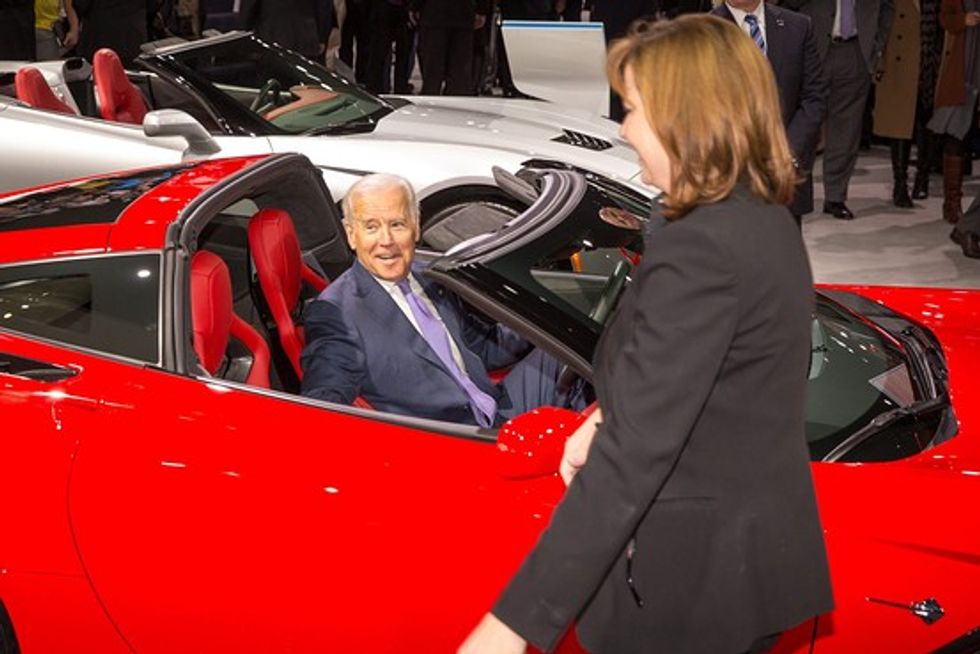 Hey there, Old Handsome Joe Biden! How youliking the motorcars at the Detroit Auto Show? Too bad the Secret Service won't let you take a literal victory lap, but the metaphorical kind isn't bad, either:

“What a difference five years makes,” Mr. Biden said to auto executives, noting that in 2009 car sales plunged and many questioned whether the auto industry could survive the recession. Auto sales have surged in recent months and climbed back to precrisis levels.

“American cars and trucks are once again changing the game and I might add providing good, decent jobs,” he said.

We would really like to be able to say that OHJB then burned donuts into the auto show carpet, sending journalists scattering, but sadly, that would be inaccurate. Canada's National Journal does at least note that he gave it some thought:

Sitting in some new models of the Jeep Cherokee and Chrysler 200, he joked to surrounding reporters that he might run them over. "I am driving it off," said the flamboyant No. 2.

Heh. "Flamboyant." We believe that means that Mr. Vice President Old Handsome Biden is what you call a ho-mo-sechsul.

OHJB, as we all know, does not actually own a pristine 1981 Trans Am, but he is very, very fond of his 1967 Corvette, hashtag #ImaVetteGuy:

And he reminisced a bit about how he got that car as an engagement gift from his dad; he also said that his sons had done some work on the car for him last Christmas, so he had to try it out:

"I have a long driveway where I live -- and I said to the chief agent, I said, look, either get in the passenger seat with me or shoot me, because I’m moving," Mr. Biden said to laughs.

He added that he'd done a 60-foot burnout, which should pretty much cement his reputation as the awesomest VP ever in the history of ever. Why, internet, is there no video of this?

And then he praised the new Corvette Z06, which has a ridonkulous 625 horsepower and does zero to 60 in 3.4 seconds. He also sat behind the wheel of a red Stingray while new GM CEO Mary Barra briefed him on the new models' exciting new advanced tech, and shouted out "Technology matters" to reporters. Because you have to at least act a little bit like you're vice president, not just a motorhead.

Later, while visiting the Ford display, where he chatted with Ford head Bill Ford Jr. and Michigan Rep. John Dingell, Biden apparently gave Ford props for not needing a bailout like Chrysler and GM, saying "Thank you for saving our ass." We did not bother checking wingnut social media for fainting spells brought on by how he has once again diminished his office by speaking like a boorish ruffian.

Sadly, OHJB had to leave without taking any cars home with him. Is he going to have fun once he retires, or what?

Follow Doktor Zoom on Twitter. He likes his '73 Chevy, Vlad the Impala, but knows better than to challenge OHJB to a drag race. Maybe in one of these...