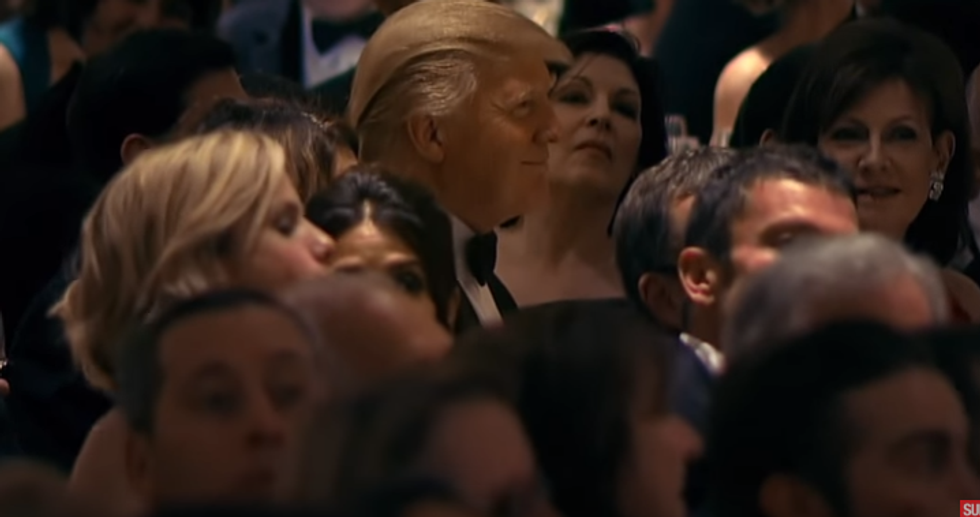 Trump and his disgusting hair trying to pretend he's not crying inside because the black man is making fun of him.

Does everyone remember that ALLEGEDLY story about how the real original reason Donald Trump decided to run for president is because, in 2011, at the height of his birther crusade against President Obama, the president (WHILE HE WAS KILLING OSAMA BIN LADEN) made fun of Trump for HOURS AND HOURS at the White House Correspondents Dinner, while Trump just sat there wooden-faced like he was trying not to burst out crying and raging and sticking his little tiny hands in his waistband and pulling down his pants and running around showing everybody his weenus, which his mom said WAS TOO just as big as the other boys'? Yeah, that thing.

Trump's response to the story was like "Nuh uh, I am a VERY SERIOUS PERSON, not a total pussy like that." Thing is, we KNOW he's a total pussy, and according to his best pal Omarosa Manigault, that lady from "The Apprentice," that was DEFINITELY the night the thin-skinned man baby from the tackiest, most tasteless part of hell, decided he had to run for president. He had to have the last word and be the guy who took over the White House from that black president GRRRRRRRRRRR!

Appearing on a "Frontline" special that's airing next week -- Frontline like the show, not the flea and tick prevention medicine -- Omarosa said this about that night at the Nerd Prom:

It just kept GOING and GOING, and [Obama] just kept hammering him, and I just thought, "Ohhhh, Barack Obama is starting something that I don't know if he'll be able to finish. [...]

Every critic, every detractor, will have to bow down to President Trump. It’s everyone who’s ever doubted Donald, who ever disagreed, who ever challenged him. It is the ultimate revenge to become the most powerful man in the universe.

Everybody who ever MADE FUNNY JOKES ABOUT HIM, YOU'LL SEE, he'll haul them right off to the gas chamber or whatever plans his minuscule hands have stucked up his sleeve, YOU'RE NOT HIS REAL DAD AND HE'S GONNA SHOW YOU.

[wonkbar]<a href="http://wonkette.com/606840/donald-trump-doesnt-want-to-admit-refugees-because-hes-a-racist-dammit-a-racist"></a>[/wonkbar]Oh God. This is Trump's buddy talking. His loser buddy, Omarosa. She may think she is helping, that she is telling a story about a valiant knight defending his honor, determined to come out on top. NORMAL people on the other hand, people who love themselves and don't have deep, painful self-esteem issues, see it for what it is. Trump is tiny, sad, weak little man, who started a bullshit, racist crusade against the first black president (because he is a goddamned racist), and HE LOST. And everyone in that room was laughing at Trump, not with him, because everybody who's anybody knows Trump is a fraud, that he actually doesn't belong among them, that he cheated his way to the top, but isn't really at the "top" of anything. He's a laughingstock, and he deserves to be treated as such.

And Omarosa -- all smiles! -- says she can't wait to see every knee bow and every tongue confess that Donald Trump is Lord. Or Hitler. Or whatever he really wants to be inside his tiny-brained soul.

Oh, Omarosa, what have you done? You told the truth -- are you going to be YOU'RE FIRED again?

Michael D'Antonio, author of The Truth About Trump, adds in the clip that "this is personal for him" and that it is a "burning, personal need he has to redeem himself from being humiliated by the first black president," and if that is not enough to convince you that the man has no business anywhere near the Oval Office -- that he has such contempt for the office he's running for that he's only trying to get there to prove he's better than Obama (which he is CLEARLY not) -- then nothing will, and fuck you.

Oh, you wanted to watch it again? Us too.

So weird how we never get tired of that.