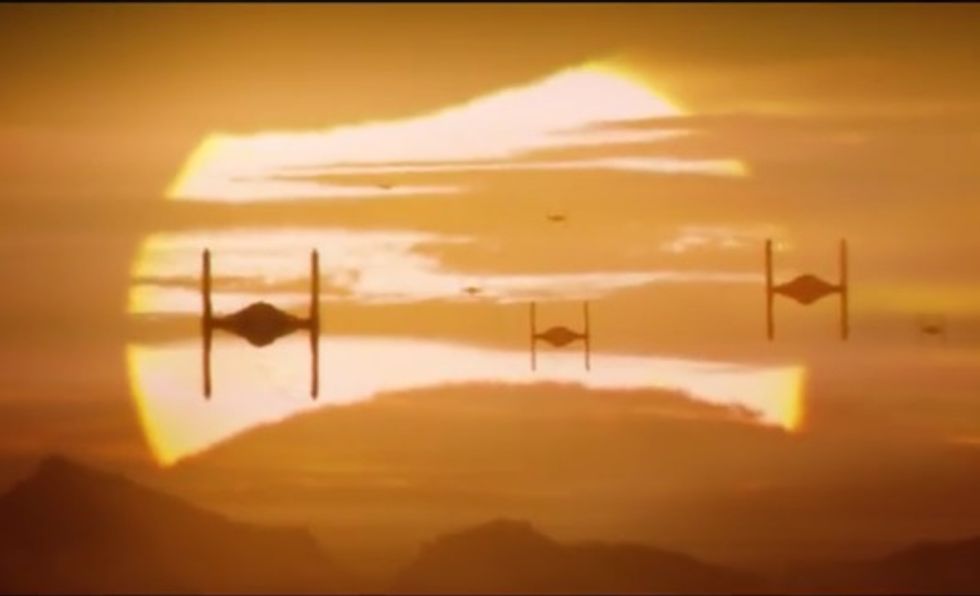 Guys, guys, GUYS!!!!! (We mean the gender-inclusive version of that, of course.) New international version of the Star Wars Trailer, with teensy bits of footage and dialogue that weren't in the previous New Trailer! You are required by Pavlovian reflex to be excited by this! Actually, it is pretty cool, and we should have a moment of silence for the many Bothans who died to get it posted online. Whew. Now that we can breathe again, welcome to your Saturday Nerdout!

[contextly_sidebar id="PeNRWgpy9mTCJm0cxp6aSkKlsf3nu3vG"]First up, a follow-up to our story about the weird light coming from star KIC 8462852, spotted by the Kepler Space Telescope, which some people thought might be evidence of "alien megastructures" orbiting the star. While the speculation was slightly more grounded in science than the likelihood that aliens built Ben Carson, it was a fairly outside guess to begin with, but tantalizing enough for the folks at SETI to point a radiotelescope array at KIC 8462852 (aka "Tabby’s Star" for some reason), with the not exactly surprising result that there's nothing but the usual cosmic hiss -- no interesting signals that indicate a Hailing Frequency or even alien reruns of My Favorite Hu-Mon. Just dust and echoes, as some blue lady said. Still, SETI astronomer Seth Shostak remains upbeat, because he likes to watch (the skies):

The history of astronomy tells us that every time we thought we had found a phenomenon due to the activities of extraterrestrials, we were wrong. But although it’s quite likely that this star’s strange behavior is due to nature, not aliens, it’s only prudent to check such things out.

Jeremy Miller is 8 years old and has spina bifida, and his dad, Ryan Scott Miller, likes to tinker. For Halloween this year, Ryan built Jeremy a Rebel Snowspeeder to bolt on to his wheelchair, complete with opening flaps and Nerf-dart firing lasers. Jeremy's ride got a thumbs up from so-so pilot Luke Skywalker, who as we recall let his Snowspeeder get shot down during the Battle of Hoth:

Skywalker? He's a hero because he got his hand cut off by his father. We like heroes whose hands don't get cut off.

Ryan and Jeremy are really into the whole Halloween thing. Last year, Jeremy was Captain America, with motorcycle noises provided by a bluetooth speaker system.

From orbital record-setting astronaut Scott Kelly, a cool tweet. From Space. (Holy crap, we really are in the future, aren't we?) The International Space Station glowing as it catches the first rays of the sun over the "horizon":

That'll Do, Rosetta Orbiter. That'll Do

Go over to Gizmodo and give this cool piece about researchers' plans for the last days of the European Space Agency's Rosetta orbiter, which has been sending back photos and data from comet 67P. Rosetta is the first earth probe to orbit a comet and to successfully deploy -- if only briefly -- a lander on one, but the comet's trajectory around the sun will be taking it far enough away in 2016 that Rosetta's solar panels will no longer provide power. Mission's coming to an end. But rather than just letting it fly off into the cold, Rosetta's operators are going to send it out with a soft, silent bang: in September of next year, the probe will slowly maneuver closer to the surface of the comet so it can send back even more-detailed photos of the surface, collecting data until it finally crash-lands. No, Bruce Willis won't be along for the ride.

This one's from late October, but you may have missed it: The New York Times Magazine did a fantastic longread profile of NPR's Terry Gross, which you owe it to yourself to read and enjoy. Pour another cup of coffee and settle in for a look at someone who's probably the best person in the world at doing what she does. (Be ready to tear up a bit when the piece recalls Maurice Sendak's final interview with Gross).

You might also like Ira Glass's much shorter piece in response to the NYT piece about Gross, in which we learn two things we didn't know before: 1) Composer Philip Glass is Ira's cousin, and 2) When Terry Gross interviewed Philip, she asked:

“Do you ever try to write music that doesn’t sound like Philip Glass music?” The greatest question he’s ever been asked in an interview. “Yes!” he responded, excited by the question. “And every time I fail.”

And finally, even if you don't have time to read the whole NYT piece now (make the time, you!), you can at least enjoy this short film, "Fresh Air 2: 2 Fresh 2 Furious," that Terry Gross made with comedian Mike Birbiglia to promote his 2012 movie Sleepwalk With Me:

Enjoy your weekend, Nerdlings. We hear there's a spy movie out with a lot of 'splosions that you may want to see, too. Something about Sprockets.