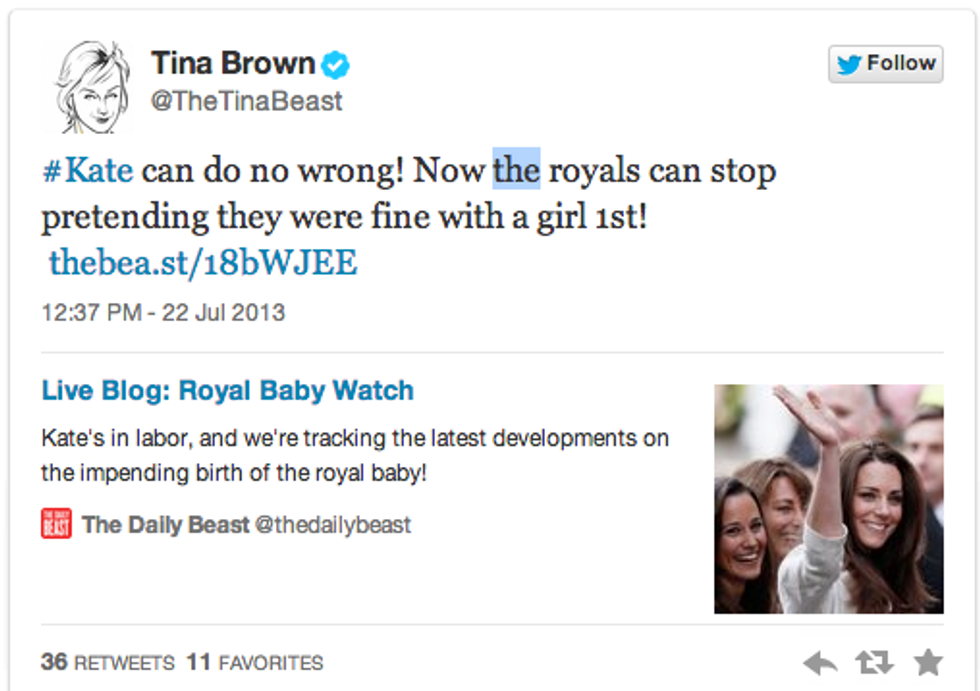 While much of Twitter yesterday was given over to plaintive wailing about how announcing the Royal Spawn was a "boy" was an offensive worldwide assault of heteronormative cispression (TRIGGER WARNING!), Tina Brown was doing that thing Tina Brown does, and making us like her less than we like gender studies majors and the children today who think we are supposed to ask everyone we meet at the beginning of a conversation what their preferred personal pronouns are.

TalkingPointsMemo brings word of the crimes against feminism, taste, humanity, and science:

But that's not all! Let us listen at the words that she made, with her mouth:

"As soon as William really kind of emerged into the public eye, you had this wholesome prince and his choice of Kate Middleton turns out to be absolutely impeccable. I mean, once again, she does the perfect thing," Brown said during an appearance on MSNBC's "Morning Joe." "I mean, although there's the constitutional change that we can now have a girl as the first born to be the monarch, nonetheless, she does the traditional thing, and she gives us a prince. She gives a king. I mean, let's face it, the Queen will be thrilled. She and the Duke of Edinburgh, much as they would have said they would have been fine with a girl first born, they really did want a boy and they got one."

Yes, we are sure the QUEEN -- who, last time we checked, was A WOMAN, shut up there are so genders, Jesus Christ -- was super concerned that there not be any icky girls thinking they were entitled to the completely ceremonial crown that she herself has worn for the past 272 years, that is just obvious. Also, we can hardly wait for the tabloids to share Kate's Magic One Weird Sex-Selection Trick that made sure the zygote was a boy.

In conclusion, shut the fuck up, Tina Brown. We never bought that "Downtown Tina Brown" act, and "Kennedy" was a much better veejay anyway.