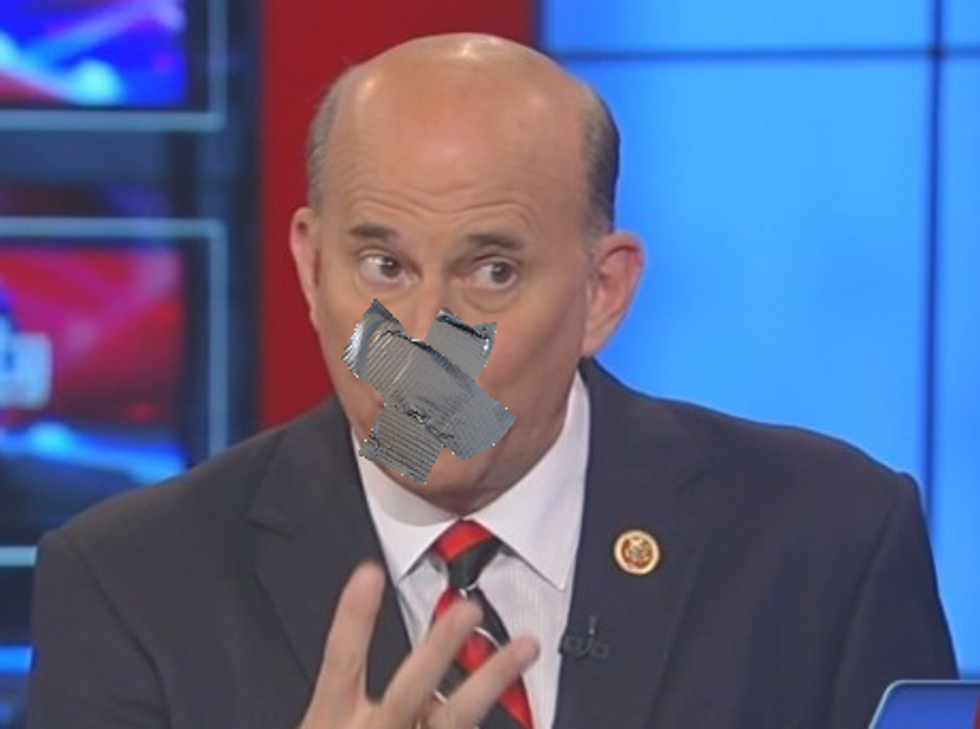 Congresstool Louie Gohmert (R-Arkham) told Sean Hannity on Tuesday that when he was a judge, he figured that a mouthy defendant had to be dealt with, so he "duct taped his head" in keeping with Article Umpty-Leven of the Constitution. This conversation was somehow supposed to be relevant to a discussion of the court martial of Maj. Nidal Hasan, who is acting (incompetently, possibly as a deliberate attempt to be executed) as his own attorney. Gohmert also complained that Barack Obama had endangered America by calling the Fort Hood shootings "workplace violence" and by closing embassies this week in the face of a possible terrorist threat. In short, Gohmertmade a very strong case for the selective application of duct tape to Fox News guests.

“You remember when [President George W. Bush] was threatened with violence, he said -- and it got a lot of criticism -- ‘bring it on,’” Gohmert recalled. “And the reaction of this administration, ‘Oh, that’s workplace violence.’ We’re threatened in our embassies, it’s not to beef up security. They have a non-verbal answer of showing their rear end and elbows as they run the other direction.”

Yep, we remember how proud everyone was of George Bush for his tough talk. He even managed to invade a whole country that had nothing to do with 9/11, just to show the world what enormous huevos he had. (He's feeling better, right, so we can call him a shithead again?) And George Bush was so tough that 4400 Americans died in Iraq, unlike the zero that have died in the last week because of Obama's cowardly embassy closures. (Or are we supposed to compare this week's non-deaths to Benghazi?) In any case, need more guns, need more Act Tuff, Need Moar Dakka.

Also, we are not military lawyers or anything, but we're pretty sure that the commander in chief doesn't set the charges in courts martial, because there's a whole bunch of people already assigned to that job. Could someone in comments double check that for us?

Gohmert said that the Fort Hood trial reminded him of the good old days in Texas, where he did what needed to be done, while wearing an onion on his belt:

“And I tell you what, I don’t know the judge that’s trying this case down at Fort Hood, but I flip back, I had one guy that was particularly out of line, and I warned him three times and then we duct taped his head,” Gohmert said. “And we didn’t hear from him until it was his turn to talk.”

“That’s when you were a judge?” Hannity wondered.

“That’s when I was a judge in felony court,” Gohmert replied. “Gave him three warnings, made the record and then wrapped him up.”

It wasn't entirely clear what the moral of this story was supposed to be, but it definitely gives an insight into the keen legal mind of Louie Gohmert.