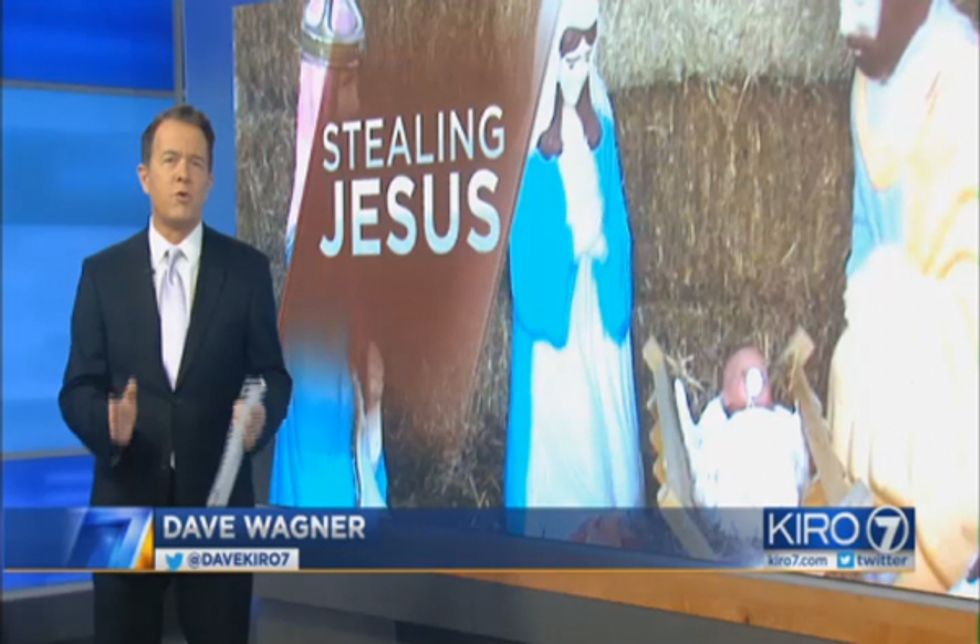 'Tis the season when you say "'tis," and also for news hole filler stories on important topics like how frequently Baby Jesus figurines get stoled from Nativity scenes, such as this story from Seattle's KIRO. Not that there's anything wrong with that, of course; it's a lot better than another grumpy War On Christmas report or some smarmy thing about Real Life Santas with hearts of gold. In fact, we'll go out on artificial Scotch Pine limb and say this might be the best Holiday Filler story we've seen in a good while.

And what do we learn about thefts of the Christkind? Turns out they happen all the freaking time, and not merely on that one old episode of Dragnet that has somehow stuck in our brain since childhood. In fact, we think it was pretty negligent of KIRO not to reference the episode, in which Babby Jesus goes missing from a mission church on Christmas Eve, and Joe Friday and Colonel Potter are unable to solve the crime at all. Just as they're about to tell the priest that the LAPD is no good at finding the Lord, a little Mexican kid, Paco, shows up with the missing Sacred Baby riding in a little red Radio Flyer wagon, explaining that, ever the good Catholic idolator, he'd promised Jesus, as embodied in the statue, that if he got a red wagon for Christmas, he'd take Baby Jesus for a ride in it. As the episode ends, the priest explains to Friday and Gannon, "Paco's family, they're poor." And then Jack Webb delivers the episode into pop culture heaven by asking, "Are they?" For all we know, all thefts of Baby Jesus from nativity scenes have been inspired by this show.

Today, Paco would be hunted down by the SWAT team. Or an open-carry vigilante would shoot him.

It turns out real-world thefts of Baby Jesus are a perpetual seasonal crisis, whether the work of radical atheists, ISIS, or moron hipsters (always likely suspects). According to KIRO, five Sacred Babies were stolen in a single year in Port Angeles, Washington, and at least three Jesi have gone missing from the manger scene outside the State Capitol in Olympia over the years, which is maybe what you should expect someplace where they brazenly fly the flag of Communist China. Not even churches with cheesy crèches are immune:

Seattle’s Capitol Hill Presbyterian Church had a five-dollar plastic baby Jesus stolen from its nativity scene last December. "It was as tacky, as cheap, as garage sale baby Jesus, mom and dad as you could get," said Pastor James Carney.

As for a replacement, Rev. Carney is done with outdoor nativity scenes:

“There’ll be no baby Jesus,” he explained. “You’ll have to come into the church and find the real Jesus, but in terms of the tacky, lit-up, plastic baby Jesus that we got from our garage sale? There will not be any baby Jesus and we can’t put out Mary and Joseph cause that just looks kind of sad.”

Also, a local religious retailer went on record with the bold admission that Baby Jesus is the most frequently stolen holiday item in their inventory:

“Everybody likes a baby,” said Gregory Musick at Kaufer’s Religious Supplies. “They never steal the wise men or camels or anything like that. It's always baby Jesus.

Can you blame them, though? Who wants a dumb old camel when you could steal the Son of God? We also have no doubt that people are only stealing Baby Jesus because not enough stores stock the item that would truly inspire people to a spirit of holiday larceny: The Pooping Sarah Palin nativity figure.

Rev. Carney wouldn't commit to any theological absolutes about the theft of Jesus statuettes, but he figures there may be post-life consequences:

"Well, I certainly would hope so. I think, being candid, your mortal soul's in danger. Is it a kidnapping? Is it something they want, a devotional aid for their home? If they do, then why don't they get the whole set? Why is it just Jesus?”

[contextly_sidebar id="k50ENmz595iLACQ69PVykjc75RiHnWtp"]We should point out that, for the secular-minded, we have yet to hear of any thefts of Festivus poles, although there was that lady in Florida who took exception to the Satanic Temple's "Fallen Angel" display at the state capitol, so she ripped the thing to shreds.

May your Sacred Baby Festival be filled with joy and purloined icons, and remember, as Sarah Palin reminds us, a plastic Jewish family is the reason for the season. Don't forget to leave out cookies and bourbon for the jolly old housebreaker, and a tip for your Wonkette writers. Happy Boxing Day to all!