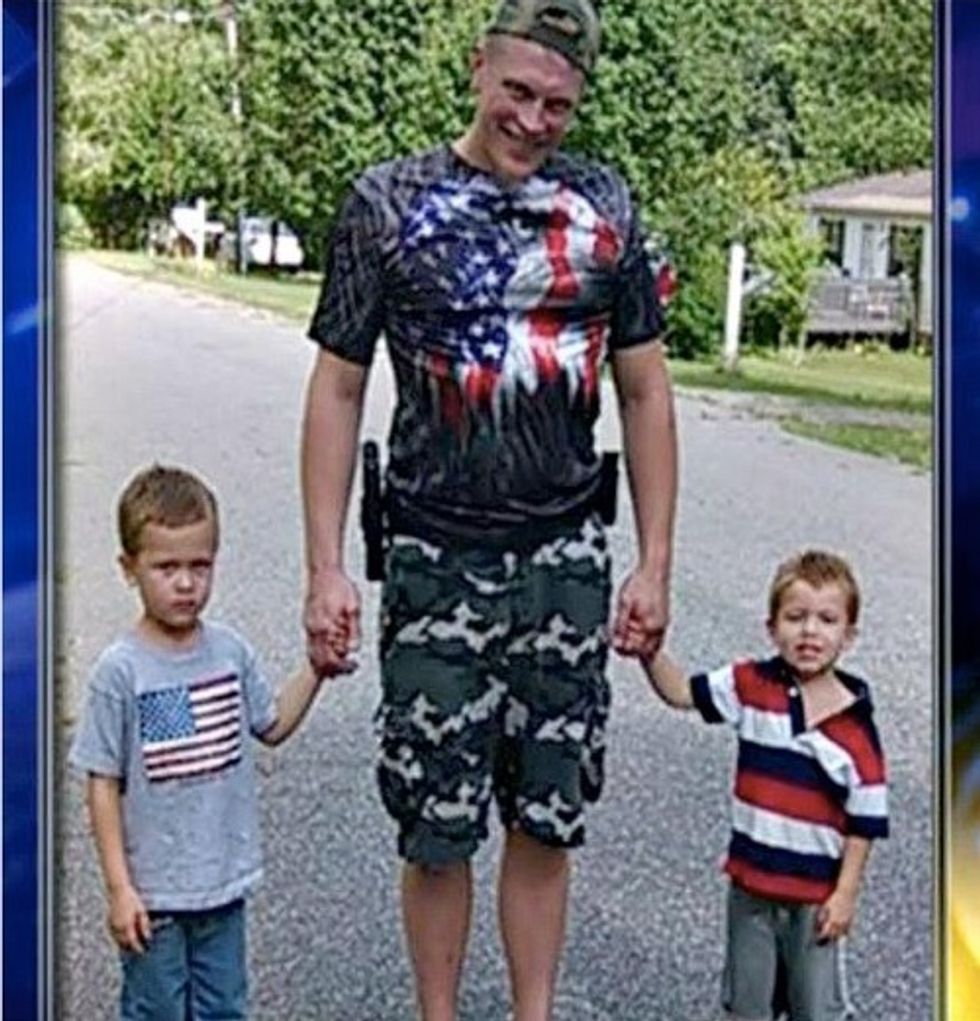 In what would, in a sane nation, be a national outrage, a responsible lover of the Second Amendment murdered his two little boys, aged three and four, before turning the gun on himself and not quite managing to commit suicide. In a sane nation, there might also be something shocking about this being the second time since December that a vocal open-carry advocate has shot family members to death. But we live in America, so it's just one more story that we'll read, shake our heads at, and perhaps wonder if it's ever going to be time to talk about guns.

No. It is never going to be time to talk about guns. They are our national fetish item. They are America. If you speak ill of guns you're a fool, a Nazi, a tool of the government that wants to take all the guns away, or worse, far worse, a wimp. Also you're pretty ghoulish to politicize the tragic deaths of two little boys -- too young to have even started kindergarten, for Christ's sake -- by turning their deaths into fodder for yet another ineffectual call for maybe some common sense talk about guns. Because freedom isn't free, and a man needs a gun to protect his family. Who'll protect his family from the man with the gun? Shut up, you gun-grabber. You're just playing to emotions instead of recognizing the fact that guns save lives. Except when they don't.

Let's back up and get at the details: The boys, Josiah Fuller, 3, and Uriah Fuller, 4, were shot to death at around 3 in the morning by their father, Shawn Fuller, 31, in Statesville, North Carolina, following a domestic disturbance from which Fuller's wife, whose name hasn't been released, escaped. According to a neighbor, Fuller regularly fired guns at milk jugs, cans, and trees in his backyard, often while drinking alcohol. The call to the Iredell County Sheriff's office reported a "domestic incident" at the home; the caller "said a man at the home was firing a gun and was intoxicated." A report released Monday by the sheriff's office said that after shooting his kids, Fuller had been on the phone with an unidentified person who said that Fuller had admitted shooting his sons and had also threatened to kill law enforcement officers, but by the time they arrived, Fuller had shot himself. He's currently in critical condition at a hospital.

Fuller's Facebook page, since removed, was the usual mix of tea party and rightwing gun nut paranoia, according to screengrabs at FreakOutNation. Here's a sampling:

In addition, the Facebook page included the usual mix of anti-Muslim memes, anti-government slogans, and a lot of "likes" for rightwing groups like the NRA, Oath Keepers, the Three Percenters, Fox News, and several Christian groups. We're sure that the Usual Idiots will find some way to explain that he was secretly a liberal, since liberals do most of the murders in America.

The afternoon before the shootings, Fuller had taken Uriah and Josiah shopping, with his gun strapped to his waist, as was apparently his habit. He made a point of telling the clerk at the store that he "wouldn’t shop anywhere he couldn’t bring his gun,” according to another shopper, Kelli Simko, who played with the boys while Fuller shopped for "something for his wife." He apparently made several comments about the need to carry a gun at all times, and also mentioned that he'd enrolled his boys in self-defense classed because of what a wicked world we live in today. “He said how you can’t even walk into a movie theater anymore,” she said.

On the occasions when they had talked, Fuller often seemed paranoid and behaved as if he was “scared of everything,” Patterson said. Fuller also worried that someone was trying to break into his home, Patterson said.

Patterson also said that Fuller feared that someone was trying to break into his home, and that on one occasion he asked Patterson if he could see a (probably imagined) intruder who had run into the woods behind their homes. Patterson also said that all the shooting in Fuller's backyard "was so common and disturbing that [Patterson's] girlfriend had moved out of the house."

So it sure sounds like Shawn Fuller was just a typical American gun-humper, albeit perhaps a more frequently liquored-up version of the standard model. His sudden drunken murder of his children shouldn't be blamed on guns, of course -- he could have killed them any number of ways, as our deleted commenters are sure to remind us. And most gun owners aren't angry drunks, or at least we hope they aren't. But Shawn Fuller had a gun handy when he was drunk and angry, and it sure is remarkable how often that combination ends up with somebody dead and a mother sobbing.

Still, the super-patriot open-carry gun-humpers are right about one thing: The Second Amendment ensured that Josiah Fuller and Uriah Fuller won't ever have to live under a tyrannical, out-of control government that crushes their liberty.

Note: As always, please be aware of the Rules for Commenting Radicals. No, we don't wish death or torture on anyone, not even on this murderous idiot.