Open Carry Gun Humpers Prevail Over NRA, Are Gunniest Nuttiest Humpiest Of All 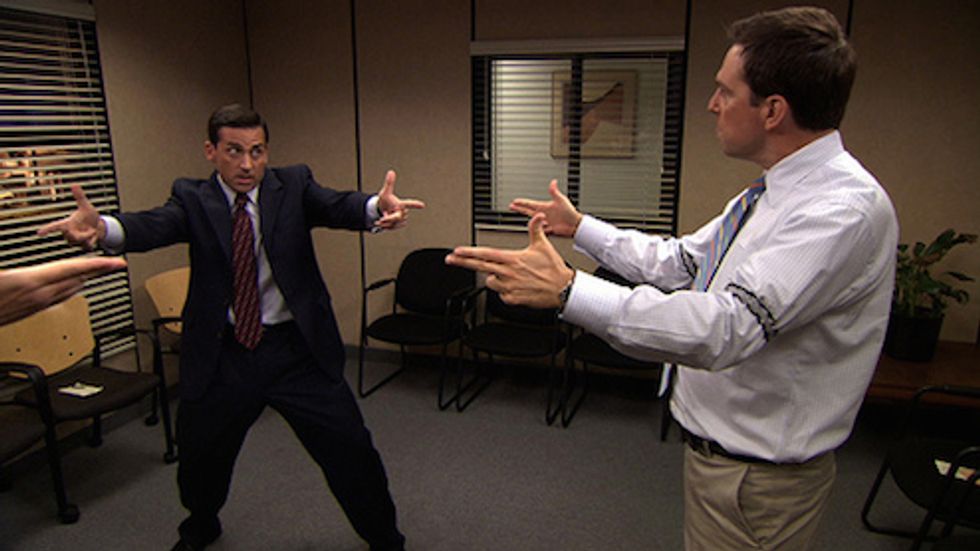 We are having one hell of a time keeping up with this internecine gun group warfare. It all started Monday, when the grandaddy of all gun-humpers, the NRA, asked some of the open carry folks to please chill because toting machine guns to TGIFriday's was making the sheeple nervous. The open carry folks, of course, were having none of that, and called the NRA pussies or blew their heads off or however it is that gun nuts fight.

You'd hope that the slightly less-batshit NRA prevailed in this instance but hahaha of course not, because the NRA backed down, muttering "our bad" and trying not to make any sudden movements lest they be cut in half by an AK.

The National Rifle Association is walking back its statement criticizing gun activists who carry loaded assault weapons in public as a form of protest, with the NRA's top lobbyist apologizing and calling the statement "a mistake." [...]

The NRA's top lobbyist, Chris Cox, appeared on the NRA's radio show Cam & Company on June 3 to repudiate the NRA's article criticizing the open carry movement. Cox said that the statement was "a mistake" and that "it shouldn't have happened," adding "our job is not to criticize the lawful behavior of fellow gun owners." Cox also blamed the statement on a "staffer" who Cox said "expressed his personal opinion."

We do wonder how it felt for the NRA, of all people, to be bullied by gun nuts. Medicine, taste, now.

No, really, how much do you think it sucked to be Chris Cox, overgroomed and overpaid NRA lobbyist, today? He had to be the guy that got tapped to go on radio and basically say "yeah, those 400-pound guys rocking tank tops and cargo pants and a gun slung across their back like they're about to deploy to the Battle of Chipotleville -- those guys are the real fucking 'Merican heroes."

You can tell Cox did not want to have to do this, because he sounds completely incoherent.

"It's a distraction," [...] "There was some confusion, we apologize, again, for any confusion that that post caused."

Translation: we will say anything you want, you insane armed-to-the-teeth bunch of bubbas, if you will just stop sweating and getting gun grease and taco sauce all over this $2500 suit.

Can't we just send all of these people off to an island where they can hunt each other? Seriously, we'll pay full freight to get them gone.