Open Carry Nuts Yell Nonsense At Texas State Rep, Because That Is Kind Of Their Thing 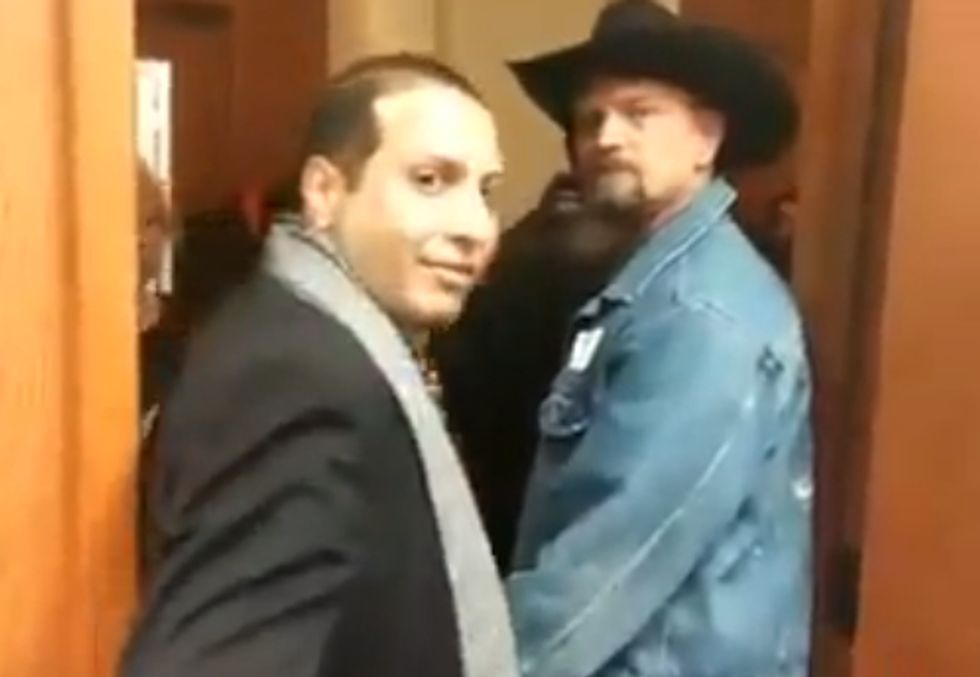 THE SETUP: A group in Texas called Open Carry Tarrant County feels very affectionately toward guns and certain Amendments. They also like HB195 ("the Texas Constitutional Carry Act of 2015"), a bill before the Texas legislature that would do two main things: Remove the requirement that Texans obtain a permit to carry a concealed handgun, and permit any legally sober Texan to carry a handgun, either concealed or openly upon their corpus, pretty much anywhere except churches, prisons, sporting events, hospitals, saloons, amusement parks, and government meetings. So Open Carry Tarrant County assembled to do a little lobbying for HB195 at the State House!

Poncho Nevárez, a State Representative from Texas's 74th District, dude with the buzz cut who's getting nonsense yelled at him.

Jacob Cordova, his squire, recently featured in this Daily Beast article about harassing cops and getting arrested for it.

Dude Talking In The Beginning, Looks Like He Has A Beard, no idea, probably likes guns.

All The Rest Of Them, either well-dressed, respectable-looking political hacks & flacks, or people who are simply outraged at the rank injustice of needing a license to carry a hand-held weapon that can kill 12 people in 12 seconds.

Poncho Nevárez, on being told that the gunfellows will "go start shopping for somebody that will" vote yes on the bill: "I don't want to vote yes. Go shop for him. Hardcore."

Nevárez: Yeah, I love the Constitution!

Cordova: How about that Second Amendment that says we have the right to bear arms... shall not be infringed?

Nevárez: I do read the Second Amendment!

Kory Watkins: You need to find a new job, bro. McDonald's is hiring.

Cordova: As far as I'm concerned you're a tyrant to the Constitution of the United States of America.

Nevárez: I'm a tyrant to the Constitution [unintelligible].

Nevárez: Hey, walk out of my office now.

Cordova: It's his office. It's the PEOPLE'S office! They voted for you. You work for us!

Cordova: You are a tyrant [yeah, again].

Watkins, being ushered out: Don't touch me [he says this like four times like a real tough guy].

Nevárez: Get your foot out of my door [yes, Kory Watkins really wedged his foot in the door before leaving, like some kind of reverse traveling salesman].

Watkins: What are you gonna do?

1) Being a Democrat in Texas is not for the faint of heart.

2) Being a weird dick in Texas will get you some Facebook love from your weird dick friends, but people will still call you out even if you're ostensibly on the same team. See below a) our favorite comment from Kory Watkins' Facebook wall; b) the leader of Open Carry Texas condemning Watkins' tactics.

3) It seems like the more someone yells about the Constitution, the less they actually know about it. Like, they really seem to think Poncho Nevárez, a State Rep, is VIOLATING THE CONSTITUTION because he doesn't want to vote for an open carry bill. Sorry, where in the Constitution does it say that state legislators are responsible for -- oh right, it's just idiocy.

Look, even if Texas's gun laws were unconstitutional, you wouldn't need a State Rep to remedy that. That's a job for the courts, up to and including the Supreme Court. If the gun fanatics want to yell at someone, they should be yelling at Antonin Scalia. Really! He's the Supreme Court Justice who wrote the controlling opinion in Heller, a decision that gun nuts tend to love because it affirmatively established an individual right to own firearms.

But! Here are some words that are also in Heller:

Like most rights, the right secured by the Second Amendment is not unlimited. From Blackstone through the 19th-century cases, commentators and courts rou­tinely explained that the right was not a right to keep and carry any weapon whatsoever in any manner whatsoever and for whatever purpose. [...] For exam­ple, the majority of the 19th-century courts to consider the question held that prohibitions on carrying concealed weapons were lawful under the Second Amendment or state analogues.

Can you even believe it? Scalia! Antonin Fucking Scalia, perennial contender for the American left's Most Loathed Man, Non-Cheney Division, tells us that "the right secured by the Second Amendment is not unlimited." He could have blown this whole "reasonable restrictions on the ownership and use of guns" thing wide open, and he didn't.

4) In a way, it's kind of a testament to how much is right in this country when you see how people can get so fixated on such an insignificant issue as whether you can ALSO carry your pistol when you're carrying your rifle to daycare. Assuming the absence of psychosis, that kind of break with reality takes a certain level of national prosperity and political stability that we shouldn't take for granted. To let yourself get that worked up about something fake must mean that all the real stuff that actually matters is going relatively well for you. You don't see Calcutta street urchins getting all indignant about stuff like this, right?

6) This is probably not the best way to influence your representatives. Here's a better way, courtesy of Moms Demand Action for Gun Sense, who were also at the State House on Monday: COOKIES!

Special thanks to our anonymous tipster for identifying the principals in the video and providing background for this story.