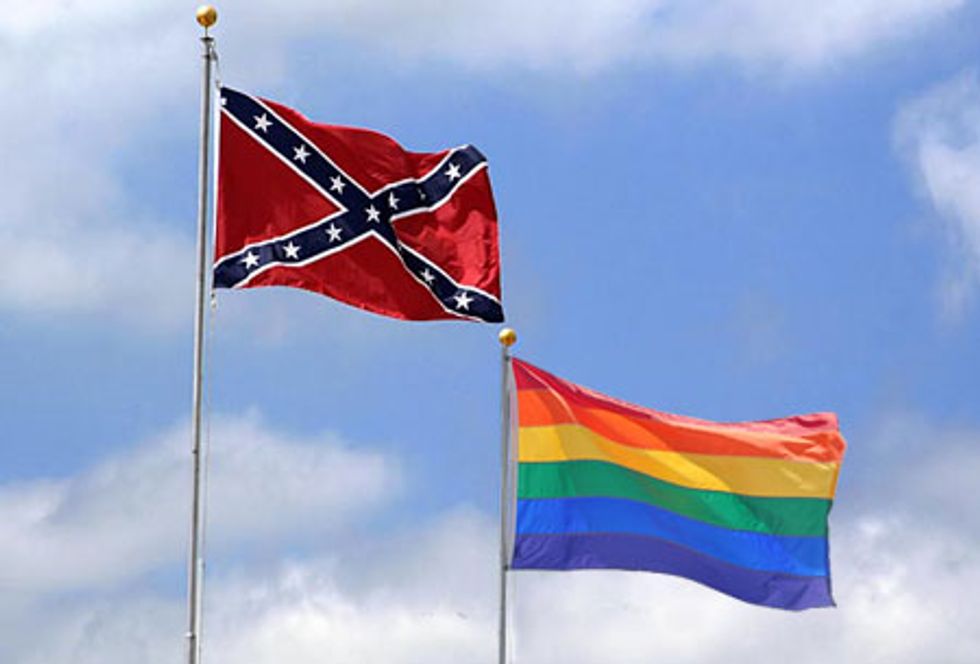 The Confederate "Rebel" flag has stood as a symbol, for decades upon decades, of black people being enslaved, oppressed under Jim Crow laws, being LYNCHED simply for who they are. The rainbow gay pride flag is a pretty rainbow that means something like "ohana" for all the gays, we don't fucking know, we're bad at gayness. But did you know, that in the perpetually aggrieved and butthurt fever dreams of anti-gay "Christian" wingnuts, the gay pride flag is LITERALLY lynching them, and also Holocausting them? IT'S TWOO! Grab a box of Kleenex, because you're going to need something to wipe up all the tears of empathy you're about to shed for America's most oppressed majority.

You see, with all this talk of the Confederate flag coming down, wingnuts are seizing the opportunity to say, "Oh yeah? You gonna take the flag that makes us feel good about hating The Blacks? Well fair's fair, take down your fag flag too, because it hurts our pussy-ass FEELINGS." Bryan Fischer will start us off, because nobody can top Bryan Fischer in the bugfuck insane department. All others who repeat his words are simply Bryan Fischer's Big Nelly Bottoms:

Now look, he's NOT SAYING GAYS ARE NAZIS, even though he just used his made-up, sure-to-catch-on term, "Gay Reich."

I'm not saying that they're Nazis, I'm not saying that, I'm saying the Nazis had a flag, the Confederates have a flag, the United States has a flag, and the gay lobby, Big Gay, the Gay Gestapo, they've got a flag. And it's the rainbow flag. And I'm suggesting to you that that flag is a symbol of slavery and oppression and bigotry and prejudice and bias. So if we're going to go after symbols of oppression, we oughta make the rainbow flag the next target for removal in our culture."

See, the gays are just like all the murderous regimes, and also the United States! The fact that he also uses the phrase "Gay Gestapo" is of no consequence. He's just saying that gays are exactly like Nazis, except instead of rounding up Jews, we're rounding up fundamentalist Christians and gassing them in concentration camps, which really interferes with brunch.

Of course, in point of fact, the rainbow flag and any other symbols of gay liberation, like the pink triangle THE NAZIS FORCED GAYS TO WEAR, represent freedom from bigotry and oppression and prejudice and bias, but Bryan Fischer is a motherfucking loon, who believes that gays did the Holocaust.

Now, many people on the Right, to their credit, acknowledge that Bryan Fischer's picture probably should decorate the front of the DSM-IV manual, and pay him little attention, but Dead Breitbart's John Nolte is dumber than a bag of syphilitic fucks, so he'd like to to expand on Fischer's diatribe, please:

In this reading, we assume "hasn't been paying attention" is synonymous with people who are "current on their shots." Nolte followed up his little Twitter diaper-loading session with a short column:

Under this banner of hate, people are outed against their will, terrorized out of business merely for being Christian, bullied and harassed for thoughtcrimes; moreover, “hate crimes” are being manufactured to keep us divided, Christians are refused service, death threats are hurled, and Christianity is regularly smeared as hate speech.

Poor John Nolte is far too stupid to understand that none of the examples he lists are true, the way he says them, but briefly: Politicians have been outed for trolling Grindr for strange dick while voting against the interests of the LGBT community. This is called the "Barney Frank Rule," and it is fair game. Nobody has been "terrorized out of business" for being Christian. Nolte refers to the Deliverance extras who run Memories Pizza in Indiana, who got near a million ameros on GoFundMe for saying they're such bigots they'd never cater a gay wedding, not that a gay wedding would ever want their shitty pizza. The thing about "thoughtcrime" refers to the dumb rich gays who decided it would be a good idea to suck Ted Cruz's cock and are now OPPRESSED! because other gays think they're assholes. Sigh.

The rest of Nolte's leaking abscess of a paragraph is just more whiny "we're the REAL victims!" bullshit. Check his links if you don't believe us.

Nolte's compatriot at Dead Breitbart, the never-nude Vestal Virgin Ben Shapiro, is being oppressed by rainbow flags AND crosswalks:

Of course, a gay conservative wouldn't read all this and agree with it, would they? Let's visit the Stupidest Homosexual On The Internet, Gay Patriot, and see what he has to say:

John Nolte has a point, if you’re on the wrong side of gay marriage or any other agenda items, then this is the flag of your oppressor.

Ha ha, that dumbass Quisling never fails to deliver. Yr Wonkette may not know all the history of the gay flag, but when you're sucking anti-gay talking points out of John Nolte's winkie right after Bryan Fischer deposited them in his throat, YOU'RE DOING GAY WRONG. Unless that's what you're into, no judgment.