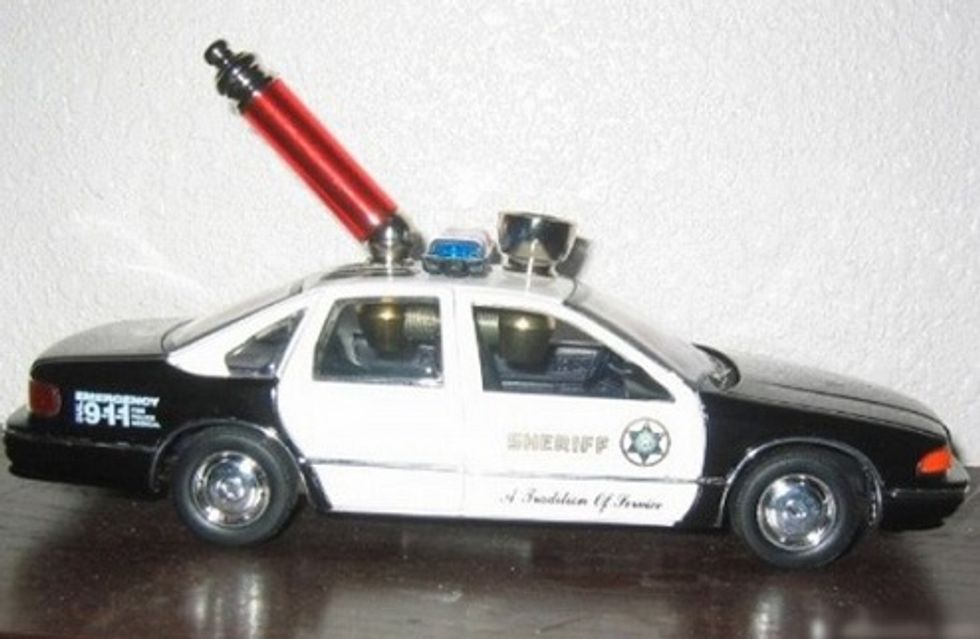 To protect, serve, and pass to the right

You wacky stoners might remember -- were your synapses not fried by the Demon Weed -- those cops in Santa Ana, California, who were caught on video apparently sampling the inventory of a local marijuana dispensary they raided last May. While the cops ripped down and destroyed all the shop's obvious surveillance cameras, additional better-hidden cameras captured the mayhem as the cops munched on snacks, played darts, and in one case cheerfully chatted about how much fun it would have been to beat on a disabled woman in an electric wheelchair:

Male Cop: Did you punch that one-legged old benita?

Female Cop, laughing: I was about to kick her in her fucking nub.

You know, the usual Thin Blue Line Of Heroes Keeping Us Safe shit.

Now the wheels of justice have taken their long, slow turns, and the Orange County District Attorney’s Office announced this week that three of the cops have been charged with theft for their actions in the May 26 raid on Sky High Holistic. Brandon Matthew Sontag, 31, Nicole Lynn Quijas, 37, and Jorge Arroyo, 32, were each charged with a single misdemeanor count of theft, with an additional vandalism count against Sontag for wrecking five surveillance cameras.

The big news update here is that even though the video showed one cop joking "I kinda feel light-headed," prosecutors said the items taken were actually employees' snacks, of the non-marijuana-laced kind, although "they did take a number of snacks that belonged to the staff, including Detour Simple protein bars and Mrs. Thinster cookies."

That detail takes much of the fun out of the story, because we had so many jokes about cops being potted up on weed. But at least some of the sleazeball cops face justice, if convicted in cop-friendly Orange County:

At the very least, they'll probably receive a very stern wag of a prosecutorial finger before the jury sends them home with a note of thanks for protecting us all from pothead entrepreneurs.

The officers are still on paid leave while the Santa Ana PD completes its own internal investigation, which you might think would take issue with police officers casually joking about kicking Sky High volunteer Marla James right in her stump, HAW HAW. But who are we to impose our politically correct opinions on brave men and women doing a very stressful job of barging into a pot dispensary like they're carrying out a SWAT raid? As The Atlantic's Conor Friedersdorf noted at the time, serving a misdemeanor warrant accusing the dispensary of operating without a license didn't exactly call for drawn guns, full tactical gear, and cops wearing balaclavas like they were taking on a terrorist cell. And yes, the cops whacked the unlocked front door with a battering ram a few times -- just as if they were hitting a crack house -- before trying the novel step of pulling the handle and pouring in, pointing guns and shouting "clear!" at the confused customers, as seen in this video edited by the dispensary's attorney.

We're a tiny bit disappointed the video didn't capture a little bell tinkling when they came in.

At least a judge rejected the police union's contention last summer that the videos shouldn't be used at all in the investigation, since the poor officers' privacy rights were supposedly violated. The police union filed a lawsuit calling for the exclusion of the videos, since the officers assumed they'd disabled or destroyed all the shop's surveillance cameras and therefore "had a reasonable expectation that their conversations were no longer being recorded and the undercover officers, feeling that they were safe to do so, removed their masks." Take heart, gentle reader: some police claims are too goofy even for Orange County.

Perhaps, since the internal affairs division is working with the full, unedited video showing the cops trashing the place, maybe the officers will face serious disciplinary action once that investigation is finished. Stop snickering. It could happen.