Oregon Judge Won't Marry No Gays, But Look At His Rad Picture Of Hitler 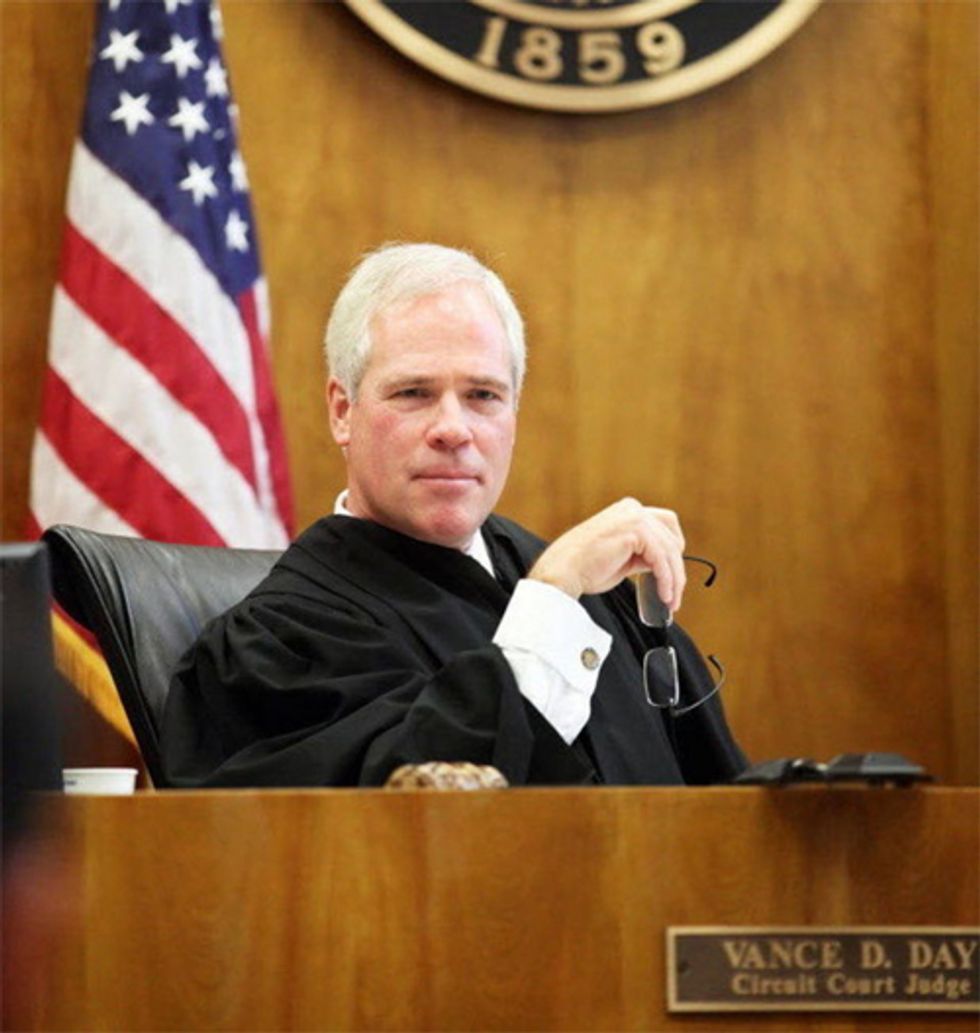 While Kentucky county clerk Kim Davis and her lunatic fans hog the media spotlight with their wacky antics, an Oregon judge, the Hon. Vance Day of Marion County, has been quietly refusing to perform weddings for same-sex couples, initially telling his staff to send gay couples to other judges, and eventually refusing to perform any weddings at all. After complaints about his no-gays policy, the state's Commission on Judicial Fitness and Disability opened an investigation, and has scheduled a hearing to assess Day's fitness to serve, expanding the inquiry beyond the marriage issue to include several other complaints, including a few other eyebrow-raising claims:

Day is also accused of hanging a picture of Hitler in the Salem courthouse, allowing a convicted felon to handle a gun and taking lawyers' money to fund a pet project.

He seems nice! Anti-gay and pro-Hitler.

OK, not exactly. Day didn't hang a portrait of the Fuhrer as an object of veneration; it simply didn't occur to him that hanging a collage meant to honor an American doctor who served during WW II, which happened to include a portrait of Hitler, might be, shall we say, problematic.

The collage was donated by the family of Dr. Ken Vollmar and includes memorabilia from his time in the service. It was hung in July 2014 as part of a graduation ceremony for participants in Marion County's Veterans Treatment Court.

Day's office released a statement explaining that the artwork was "designed to emphasize how a liberal democracy overcame the scourge of fascism." That part sounds worthy. It's just unfortunate that "as part of the background behind Dr. Vollmar's memorabilia the piece of art did contain a poorly preserved original painting of Adolf Hitler." But be assured, it was "not intended to honor fascism, but to honor the Americans that defeated the dreadful ideology."

Day removed the hanging the following month, after another judge pointed out that it was possible somebody might question the wisdom of having a picture of Adolf Hitler hanging in a courthouse, whatever the intent. We're willing to buy Day's explanation that he simply didn't realize HANGING A PICTURE OF HITLER might be a bad idea, because he seems to be pretty clueless in other areas as well. Among the other allegations against him, Day is accused of:

He really liked those wall hangings. They tied the whole courthouse together, man. And he insists that the only money that changed hands was to cover the costs of framing and hanging the art, OK?

And then, of course, there's the biggie:

Screening, or having his staff screen, wedding applicants to ensure they were not gay because he refused to perform same-sex weddings before he stopped officiating all weddings.

Day's office responded that the accusations concerning the gun-handling felon were really nothing, involving only "two very brief instances in which the veteran handled an unloaded pistol in Judge Day's presence," so it's not like the guy was really using a firearm, OK? The Oregonian has a slightly more detailed version of the situation:

The complaint alleges that Day once took his son over to the veteran's home and on another occasion, drove the veteran to his daughter's home to do some paid cabinetry work. In both incidents, Day is accused of allowing the veteran to handle guns, though as a felon the man is prohibited from possessing or using firearms. Day denies permitting or telling the man to handle the guns.

As for the guy being a felon, apparently Day forgot about that -- but he never told the guy to carry a gun, so what's the big deal?

Also, Day seems to share Kim Davis's belief that he doesn't need to do his job because God told him not to, and besides, he never actually turned any real gay couples away before he decided to stop performing weddings altogether:

Day admits directing his staff to tell same-sex marriage applicants to go to another judge, following a federal judge's May 2014 decision that struck down Oregon's gay-marriage ban.

"Judge Day has firmly held religious beliefs rooted in the Judeo-Christian tradition that defines marriage as between a female and a male," his response says.

Through his spokesman, Day has said further that he eventually stopped performing all weddings. He also said his instruction to court staff was only pre-emptive, and no same-sex couples ever asked him to be their officiant.

The commission is set to hold a hearing on Day's fitness on Nov. 9; the complaint against him says that he violated Oregon judicial ethics standards which prohibit judges from behavior that:

Day's defense is that he's being punished for expressing "his religious and political views," which he claims is an unconstitutional violation of his First and Fourteenth Amendment rights. Yr Wonkette is not a lawyer, but we're guessing that refusing to marry people who are lawfully entitled to get married isn't really protected by the First Amendment, seeing as how Day isn't a minister performing a religious service; he's a judge refusing to carry out a civil ceremony. Regardless of the hearing's outcome, we're fairly sure Judge Day will be OK. Maybe when he gets a job as a legal expert on Fox News they'll even let him hang some Hitler art in his office.