When Did You Stop Molesting Your Students, Mrs. Finkelstein?

Culture Wars
Doktor Zoom
July 21, 2022 08:55 AM
Wonkette photoshoop created using Craiyon AI
Kelly Jensen, a former librarian who edits the Book Riot blog, warned on Twitter that teachers — or anyone else in public education or libraries — should consider locking down their social media presence and remove any personal information they share online right away, because professional culture wars bully Christopher Rufo, the creep who orchestrated the rightwing media panic over "critical race theory," is launching a new series of attacks on schools and teachers, this time focused on baseless accusations that schools are simply stuffed to the rafters with "groomers" seeking to turn children gay. Rufo announced his intention to publish a series of "reports" on the alleged threat of "gender ideology" in K-12 schools for the next six weeks, with the aim of blitzing media and "driving multiple news cycles."

Read More: Here’s The POS Who Scared Your Conservative Relatives With Lies About Critical Race Theory

The misinformation campaign about to be launched is going to make this fight a lot uglier, louder, and deadly--no exaggeration--than it already is.

This is another way that the public education system is going to be shaken, end goal = destroyed.

And yes, Rufo has followed through by getting quoted in a Fox News story alleging an epidemic of sex abuse in public school teachers, headlined, "At least 181 K-12 educators charged with sex crimes in first half of 2022." 140 of those arrests, or 77 percent of the total, "involved alleged sex crimes against students." Fox compiled the number by searching local news stories about arrests of "principals, teachers, substitute teachers and teachers’ aides on child sex-related crimes" nationwide, so it's possible that arrests that didn't get reported in local media didn't make the tally. The story only lists arrests, not the disposition of the cases, so there's no breakdown of how many cases involved convictions, dropped charges, or pleas to lesser offenses.

It goes without saying that teachers who betray a trust like that should be prosecuted and removed from the profession; absolutely no one would defend such behavior.

Not surprisingly, Rufo says otherwise in the story, claiming that there's a vast cover-up:

This is a scandal that the political Left is doing everything in its power to suppress. [...] The basic fact is incontrovertible: every day, a public school teacher is arrested, indicted, or convicted for child sex abuse. And yet, the teachers unions, the public school bureaucracies, and the left-wing media pretend that the abuse isn't happening and viciously attack families who raise concerns.

This is, of course, McCarthyism and bullshit: Nobody is defending pedophiles; we're objecting to rightwing groups claiming that anyone who supports sex education or LGBTQ rights is "grooming" children. Rufo is back at his favorite game: conflating actual harm to children with the existence of gay people — ah, but if you call him out on it, you're defending abuse or trying to diminish it.

Two days ago, Rufo pretended to be shocked that Charol Shakeshaft — a prominent sex abuse researcher who "estimated in 2004 that 10 percent of K-12 students received unwanted sexual attention from adults at school" — told the Washington Post

that she is distraught that her research has been used to justify claims that public school sex education "grooms" children for abuse. She said she supports teaching comprehensive sex education because it gives children tools to keep themselves safe.

Rufo then posted an image of a research article by Shakeshaft and four colleagues, saying her comment was "surprising, because the same researcher wrote a paper last year about 'red flag grooming behaviors.'"

Shame on her for thinking that her research applies to actual perpetrators of sexual abuse (it's right there in the article title!) instead of teachers of sex ed classes or librarians who think novels about LGBTQ characters are OK.

In short, Rufo's attempt to create a moral panic is bullshit, but it will work because he'll be all over Fox and other rightwing outlets again, only now he'll be conflating sex ed and LGBTQ rights with sexual abuse.

And look, here I am, defending the very groomers he's condemning!

Luckily, there are "concerned parents" doing "volunteer trainings" teaching folks about "researching social media of teachers, school board members, staff of school districts and elected officials," because those people have got to be watched and probably exposed for all the terrible things they're undoubtedly up to. And some of those concerned parents, in addition to stalking teachers' social media for signs of gayness or "grooming," are shooting bullets into school board members' homes.

MIT Technology Review examined the harassment campaign in detail last week, focusing on organized efforts to teach would-be culture warriors how to more effectively ban books, eliminate lessons the Right doesn't like, and generally harass educators who dare suggest that schools should be diverse and inclusive, or that (the horror the horror) LGBTQ people are Americans too. 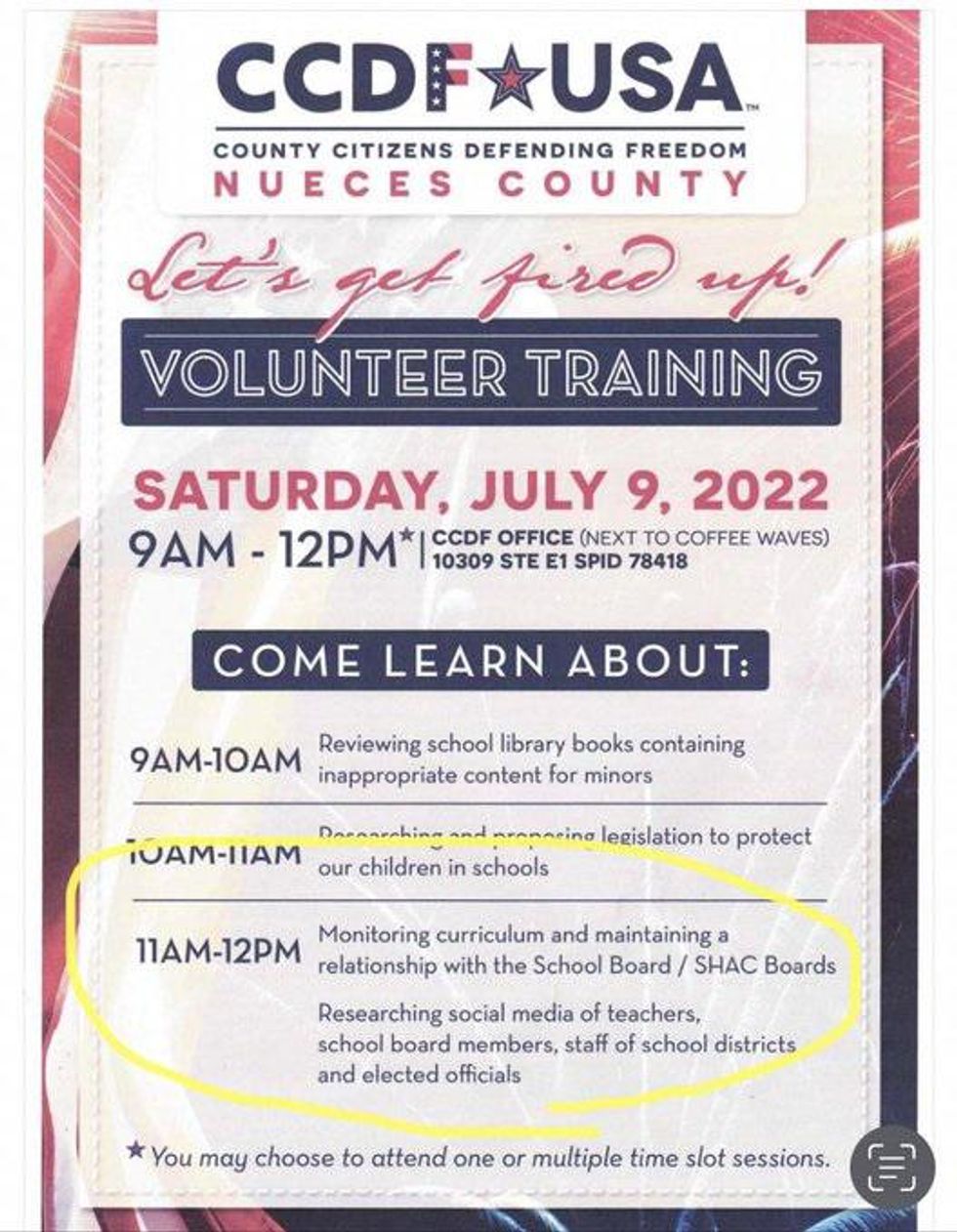 Nancy Vera, the president of the Corpus Christi chapter of the American Federation of Teachers (AFT) teachers' union, recently was awakened by a gunshot fired at her yard, shortly after a Pride event for local students where she had helped distribute books featuring LGBTQ characters. Oh mercy, a drag performer was at the event, too, as if that is even legal.

Vera's local sheriff even weighed in, calling the event an example of the "grooming and indoctrination of young people in our country," since that's clearly a matter for local law enforcement to worry about. Vera says "This type of rhetoric is going to get people killed," but that's only because patriots are trying to save America from radicals like her. In the week following the Pride event, Vera was

bombarded with threatening Facebook messages and phone calls. In an effort to protect herself, she now carries Mace and has installed home security cameras.

Her union is also helping out by paying for a security detail; local police are investigating the shot fired into her yard.

It's not going to get ugly; it already is.

Yr Wonkette is funded entirely by reader donations. If you can, please give $5 or $10 a month so we can keep calling attention to the charlatans out there.