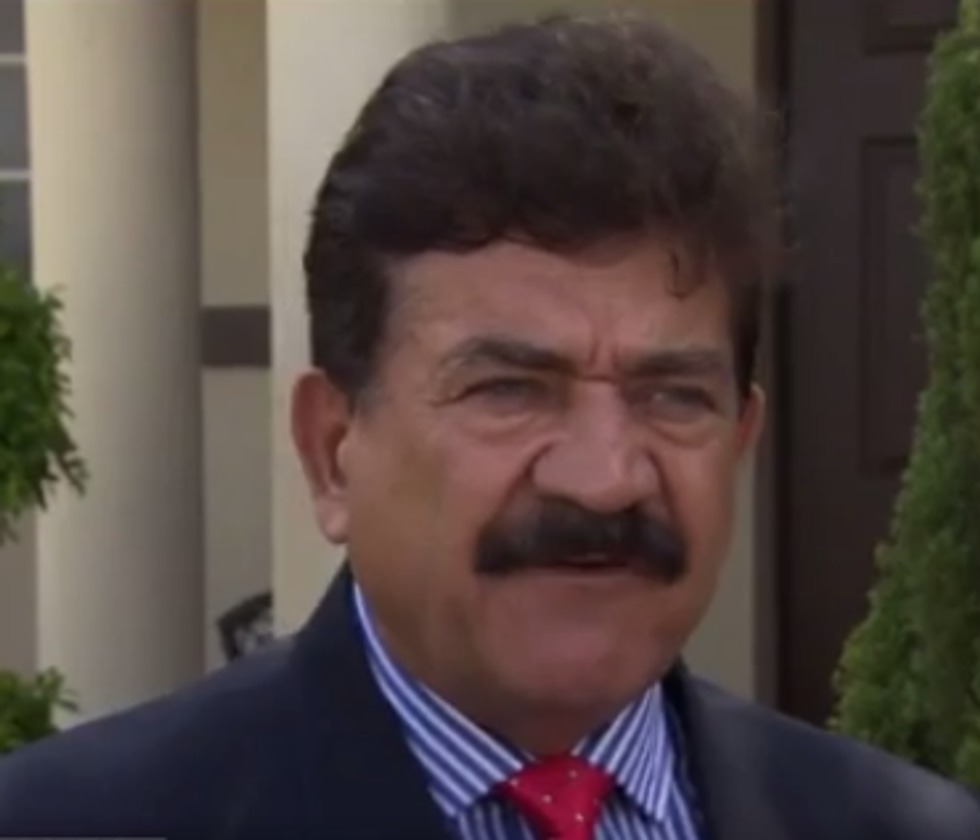 Um, so, we know that Seddique Mir Mateen, father of Omar Mateen, the Orlando nightclub murderer, who said his son shouldn't have killed all those gays because God would have punished them for their crimes eventually anyway, is probably going through a very bizarre and awful time, what with how it was his kid who killed 49 people at the Pulse nightclub.

But we need to just gently suggest that maybe it is time for him to STFU, because in a presser today, he actually blamed the owner of Pulse nightclub for not having good enough security to stop his son from murdering everyone. For real.

When anyone opens a business, I'm not aware of the situation of this club. They should have enough security, when 300, 400 people comes to the business, they should have good security. The life of 400 people depends on that business. So it's easy for them to make money, but they don't want to spend. Maybe they had some kind of sloppy security. [...] So I request from the nation [YOU FUCKING REQUEST? -- Ed.] that if anyone wants to open up a social club, they should have tight security, 24 hour, on guard security, they would have eliminated my son, that would have been good, we wouldn't have this nightmare and these losses for the families.

How DARE he? First of all, there WAS a fucking armed security guard. He had a gun battle with the murderer! But how DARE this man turn this back around and act like it was the Pulse ownership's responsibility to fortify the place, just in case his fucking son goes unhinged and commits mass murder? The FUCK?

We were under the impression that, as free Americans, we should be able to go to dinner or go dancing without just assuming we'll probably be slaughtered by a mass shooter if our chosen entertainment venue doesn't have enough security. SILLY US.

[wonkbar]<a href="http://wonkette.com/602962/hillary-clinton-shoves-donald-trumps-dumbass-terrorism-speech-right-back-down-his-throat"></a>[/wonkbar]Those weren't Dad's only suggestions, though. He would like Congress to please murder ISIS, since it is ISIS's fault (and only ISIS's fault ... oh, and also the club owners, apparently) that his son did this. He said that "It's the job of the Congress, that they should eliminate and find the solution to get rid of this ISIS idea, the killer group. The killer group." That's a good idea! Luckily our president and our next president are hard at work on that already. Unfortunately, it's not quite so simple as "Go bomb ISIS, boom you're dead!" (Sorry, Donald Trump.)

He did go on to say that if he had any inclination his son might do something like this, he "would have reported it to law enforcement immediately," and barring any evidence to the contrary, we'll take him at his word.

[wonkbar]<a href="http://wonkette.com/602935/sounds-like-orlando-gay-club-shooter-was-raging-closet-case-bet-you-didnt-see-that-coming"></a>[/wonkbar]This week, we've discussedmany factors in play in this situation, other things which might have contributed to The Terrorist Murderer's actions. Guns. ISIS. Tuesday, we talked about how Mateen was very likely a closet case, brought up in an environment of intense homophobia (see: Daddy, and also religious messages of condemnation). And we're not saying it's the father's fault all by himself, though his insane homophobia mayhaps we don't know just MAYBE might have been a factor in why his son murdered a bunch of gay people. That's just our guess, and we think it's a good guess!

And like we said, we get that Dear Old Dad is in a fucked up position. But, and we're very sorry about this, you DO NOT get to go on television and blame THE FUCKING VICTIMS, including the heartbroken, grieving club owner, for what your son did.

Instead of leaving this post right there, we will now share with you a message the owner of Pulse, Barbara Poma, recorded for her loved ones and her beloved city. Watch that to cleanse yourself of the rest of this bullshit.