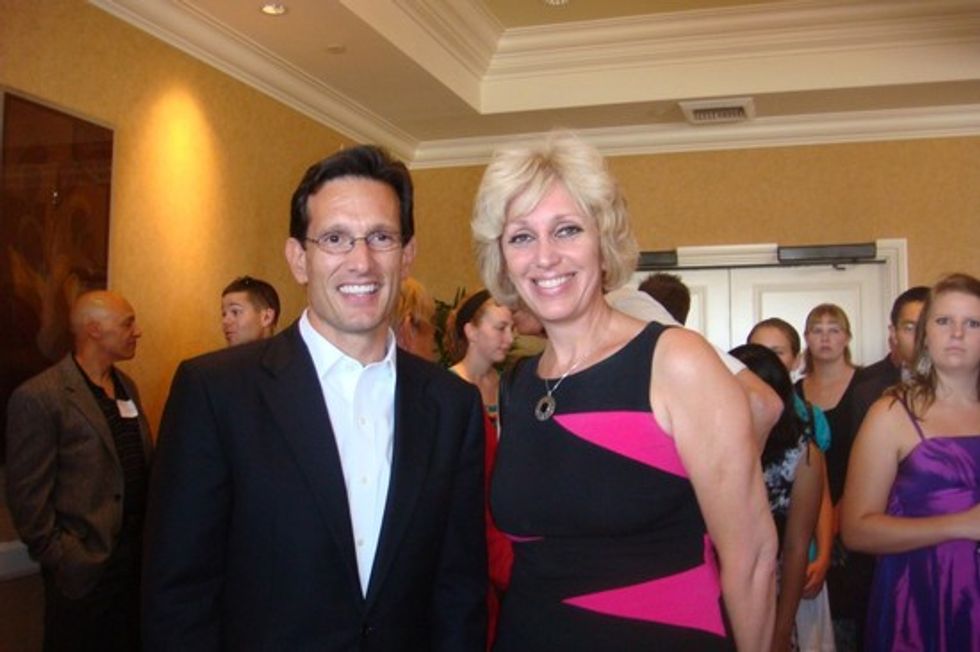 Say, it sure has been a long time since we checked in with Orly Taitz, America's leading dentist lawyer sanitation-worker waitress accountant fisherman actuary marketing-consultant mortician art-dealer publicist miner bishop truck-driver CEO carpenter professional-basketball-player dolphin. Hey, look,there she is hanging out with Eric Cantor! Those two are a classic comedy duo. Yes, poor Eric Cantor has had a lot of trouble disassociating himself with her in the past, and yet here he is again. She must dispense some really good dental-law advice, or perhaps it's her stunning beauty. Anyway, Orly is working on a play, or maybe an opera, about that Army birther doctor guy, which sounds great. Good to see she can keep busy with other hobbies despite that evil Kenyan guy making human existence basically impossible.

Today most plays are nothing more, but liberal brainwashing. Corrupt media would not report the truth. Art might be the way to go. Maybe doing a bus tour and re-enacting Lakin’s life, which is amazing, is a way to bring the message home. Lakin came from an ordinary family. He is not a racist, his wife is from Thailand. His 3 children are bi-racial.

Except he got locked up in military prison, leaving his children behind, so maybe he does hate Asian kids, despite their good brains.

Here is a working title ”American POW in America”. We can make it as a drama or as a musical. It can be bigger than “Jesus Christ -superstar”. We have a de-facto crucifixtion of an American war hero by a corrupt regime of the Kenyan usurper. Pontius Pilate bones are turning green with envy in the grave, knowing how American Judges Clay Land, David Carter and Denise Lind overshadowed him. If you want to help in this endeavor, call me 949-683-5411. Orly

There are just no words sometimes.

To describe this woman.

My kids did piano, Mission Renaissance art, stand up comedy, acting and my middle son graduated simultaneously with honors from High school and Opera conservatory.

Oh, they will be like the von Trapp family, defeating the Kenyan Nazis with the power of song! [Salon/Orly Taitz]