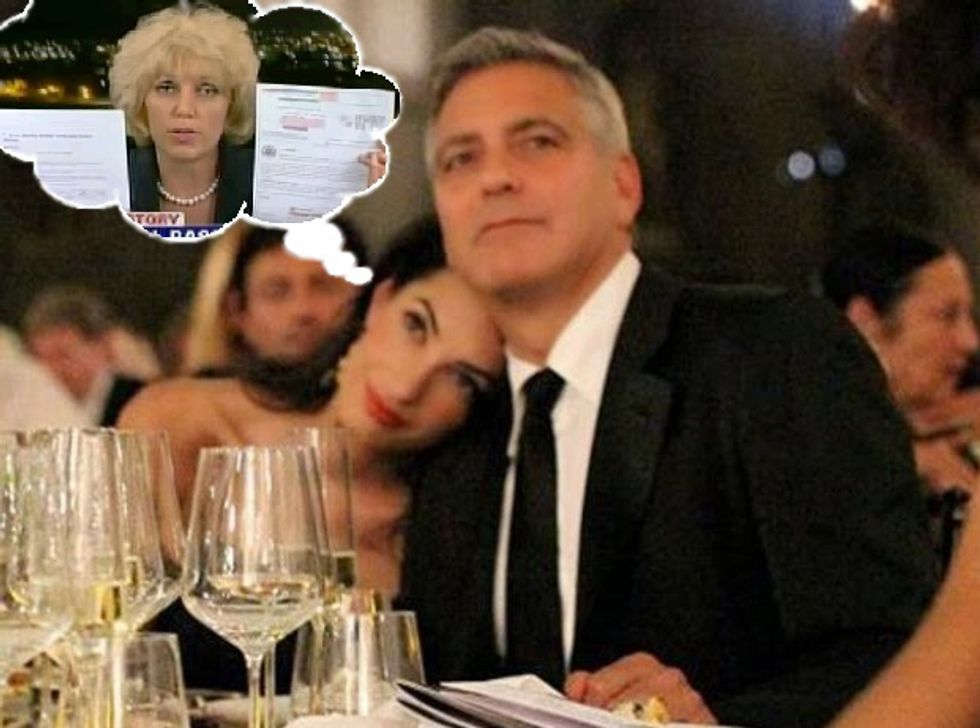 Excellent news! Birther Hivemind Queen Mother Orly Taitz got a gift subscription to People Magazine for Christmas! That's the only thing we think could possibly explain this bizarre story from Bradlee Dean's dumb website for dumb people: For some reason, the completely rational and very serious lawyer, dentist, real estate agent, and perennial fringe political candidate has gotten it into her head that she should try to recruit Amal Alamuddin Clooney, the hot human rights lawyer who married actor George Clooney last fall, into her very important campaign to prove that Barack Hussein Obama is a complete fraud with a stolen Social Security number, a fake Selective Service registration, and at least one Yahoo email account registered under the phony identity of "John Boehner's Left Nut."

Apparently, Taitz is feeling a bit of professional jealousy. You see, even though Orly Taitz, Esq. DDS and Licensed Realtor, has been fighting for years for real human rights -- the rights of Americans to not have that Fake Man in the White House -- all the media attention is going to Ms. Alamuddin Clooney, who isn't even as good a lawyer as Orly Taitz, because liberals are just biased that way. As Taitz explains,

Today, far left media is heavily promoting Amal Alamuddin, Muslim Lebaense [sic] wife of actor George Clooney. Amal is a human right attorney, known for her representation of Julian Assange and Yulia Timoshenko, even though she was a failure in both cases, she was not able to free either one of them.

Well! Orly has had just about enough of this so-called "human rights lawyer" hogging the spotlight, so she thinks it's time for Ms. Hot Muslim Lawyer to put up or shut up. She has published an Open Letter on her website -- that oughta get her attention! -- asking her to join Taitz's legal campaign against Mr. "Soebarkah-Soetoro-Obama," who has unfairly occupied the White House as if he had a right to. Taitz is positively giddy with the brilliance of her cunning plan:

Regardless of what Amal Clooney does, it is a win-win situation for us. If she chooses to investigate Obama’s usurpation of the US presidency with bogus IDs, it is great, we might get closer to removal from office and criminal investigation of Obama. If she does nothing, we’ll expose yet another liberal phony.

Taitz's Open Letter is the usual clot of gibberish alleging dark plots and criminality, and links to a whole mess of evidence of "criminality and fraud," all of which proves that the "citizen of Indonesia, born in Kenya, Barry Soetoro, aka Barry Soebarkah, aka Barack Obama is using all fabricated IDs." The letter also details some of the many times that Orly Taitz, Esq. DDS and Licensed Realtor, has been "persecuted," like how her inane lawsuits are always getting thrown out of court because any number of top U.S. officials -- from Eric Holder to all the judges -- have "committed treason in being complicit in this cover up." Why, in one of her important cases, some knave "removed 14 pages, the whole cross examination of a party, from the official transcript," and not a single one of the many judges she's pestered has corrected this travesty of justice in four years. And why? So that the "ruling international oligarchy" could have a compliant (but tyrannical) puppet in The White House to do their bidding and funnel wealth into their pockets.

Her letter closes with a heartfelt plea for simple human decency and justice, one internationally famous human rights attorney to another:

So, I hope that as a human rights attorney, fighting corruption and lawlessness in the government, you will be willing to investigate and bring to the international media all evidence of corruption, criminality and treason in the US government and US judiciary.

Yeah, Amal Alamuddin Clooney! If you're such a hotshot human rights attorney, why aren't you working on the sides of the angels, or whatever those things are that have been whispering to Orly Taitz in the wee hours of the morning? Amal Alamuddin Clooney, you have been PUT ON NOTICE: If you fail to respond, you know what Orly Taitz is going to do? She's going to call you a coward on her website, is what! Hope you're ready to face that, missy.

As if Taitz's letter weren't goofy enough, the article about it at Bradlee Dean's Derp Repository adds to it a very important question: Just what is this Clooney lady anyway?

Clooney’s father is Druze, which is a quasi-Muslim sect in Lebanon that is part of Shia Islam, while her mother is a Sunni Muslim. Several reports have described the barrister as Muslim. As far as I know, she has not been vocal enough to determine if she is Muslim or not.

Why don't we know? What is she hiding? Why isn't Congress investigating? Also, one of the commenters is pretty sure that Amal Clooney is actually a guy and George Clooney "bats for the other team," by which we assume he means the Cubs.