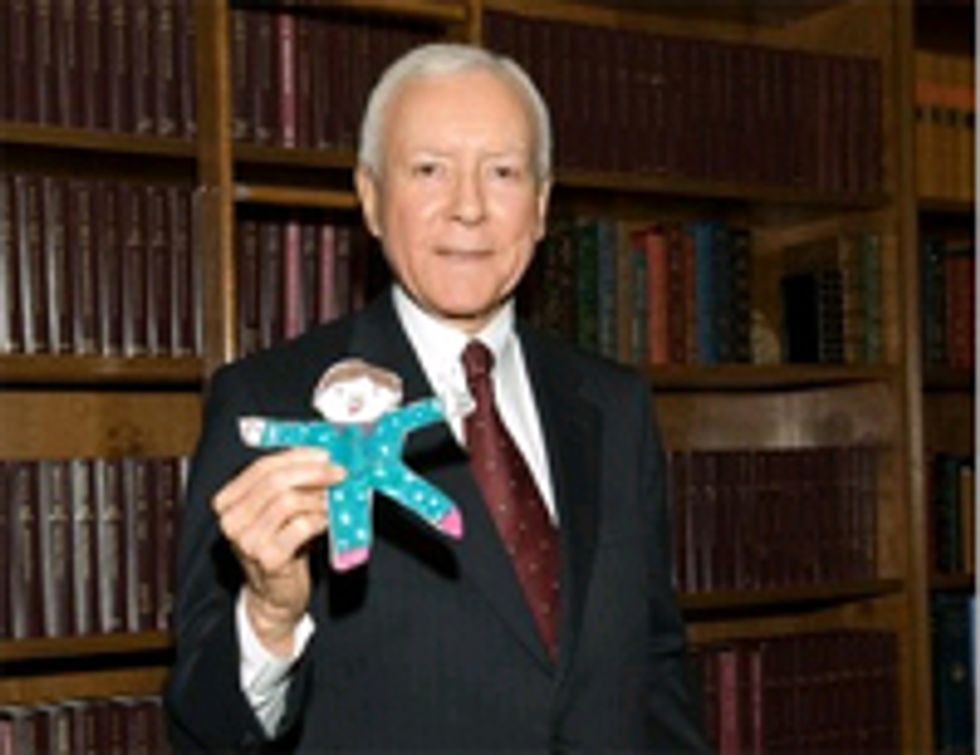 Show us on the doll where the women Rob Porter beat up hurt you.

When Orrin Hatch was first asked to comment on the allegations made by Rob Porter's former wives and one ex-girlfriend who say that Porter, Hatch's former Chief of Staff, was physically and mentally abusive to them, he had this to say:

"It's incredibly discouraging to see such a vile attack on such a decent man,” the statement read. “Shame on any publication that would print this — and shame on the politically motivated, morally bankrupt character assassins that would attempt to sully a man's good name. I know Rob. I've known him for years, both as a close friend and as a personal advisor. He is kind and considerate towards all. The country needs more honest, principled people like Rob Porter, which is why I hope that this cynical campaign to discredit his character ultimately fails."

"Kind and considerate towards all," indeed -- just so long as you are not romantically involved with him, of course.

Hatch has since released a new statement about Porter, following Porter's resignation as White House staff secretary -- the man responsible for everything the president sees. According to one of Hatch's aides, "the [first] statement was prepared before any accusations were printed but with the understanding that his past marital troubles would be used against him." This seems to suggest that Hatch knew exactly what those he referred to as "politically motivated, morally bankrupt character assassins" were going to say, but was hoping that no one would think what they were saying was all that big of a deal.

The new statement is not much better.

"I am heartbroken by today's allegations,” the statement said. “In every interaction I've had with Rob, he has been courteous, professional, and respectful. My staff loved him and he was a trusted advisor. I do not know the details of Rob's personal life. Domestic violence in any form is abhorrent. I am praying for Rob and those involved."

This statement is purposely vague. He says he is "heartbroken" by the allegations, but does not say what, exactly, he is heartbroken by. Is it the fact that Porter beat women? Is it the fact that the allegations were made in the first place? We don't know. He then condemns domestic violence generally, and offers his "prayers" for Porter and "those involved." He does not specifically condemn Porter or his actions and distances himself from knowing either way. He praises Porter for how courteous and respectful he was. It is very carefully crafted bullshit.

It's also entirely about him and his own heartbreak, not about the women he earlier maligned as "politically motivated, morally bankrupt character assassins that would attempt to sully a man's good name." He does not apologize for referring to them that way.

“I’m somebody who believes in helping people … if he needs any help in the future, I’ll try to be there,” Hatch said. “He’s a good guy… I don’t understand what happened there.”

“I don’t believe… all [the allegations], but I think there’s enough there that you have to take it very seriously,” he added.

This is not the first time Hatch has had a real problem with women claiming they were abused by men he happens to like. In 1991, he accused Anita Hill of cribbing her allegations against Clarence Thomas from The Exorcist.

Hatch, like Porter, like the women, is a Mormon. This is not insignificant. Forty-two percent of homicides in Utah are the result of domestic violence -- much higher than the national average of 30 percent (which, holy crap, is also really bad). This has a lot to do with the way the Church of Latter Day Saints handles domestic violence and other forms of abuse, and has long been an issue for a lot of those within the church and those who have left. It often entails going to the Bishop or the elders and being told to handle it within the family, within the community, not go to the police, and to respect the man as head of the household. In a Mormon family, the father is not just the father, but also the "priest" and the religious leader of the house. To go against him is going against the church itself.

Additionally, the church itself is very, very concerned about image in general, as good and wholesome and pure. They teach women makeup application at a young age, they implement strict, modest dress codes, and tend to have absurdly perfect teeth. They place a priority on these things. Domestic violence isn't just a bad thing for women, it hurts the church's image if they go public.

When Jennifer Willoughby sought help from the church concerning Porter's abuse, she was not given help, but rather was told to consider his career:

In her blog post, Willoughby wrote, “When I tried to get help, I was counseled to consider carefully how what I said might affect his career.” She told The Intercept that she had described Porter’s anger issues to a lay official in the Mormon church. She said the official had told her to think carefully about what she said publicly about Porter’s behavior. “Keep in mind, Rob has career ambitions,” she recalled the official saying. (The press office at the Mormon church’s headquarters in Salt Lake City, Utah, declined to comment for this story.)

Hatch may say domestic violence is "abhorrent," but he also appears to think it is at least equally wrong for those women to have come forward the way they did.

Of course, Hatch is hardly alone in his initial support of Porter. Both John Kelly and Sarah Huckabee Sanders said very lovely things about him right up until the pictures of Colbie Holderness with a black eye became public. They all knew about these allegations beforehand -- Hatch himself referred to them as "marital problems," and the FBI had interviewed both Willoughby and Holderness prior to his appointment. They all knew. They didn't care until the public did. They hoped that the public would buy their story of Porter's ex-wives simply being vindictive witches out to destroy a good man's political career, and when they didn't, they backed off of trying to defend him. Sort of, anyway.

The unfortunate thing is that this really shouldn't be about politics. It shouldn't be about teams and "let's see what we can get away with here!" It certainly doesn't have to be about any of that. It should be about basic human decency, and if it had been in the first place, none of these defenses or un-defenses would have had to even happen. It would be nice if entities like the Republican Party and the Church of Latter Day Saints could care more about the actual women being abused than they do about their own public image. If they could care about them before news like this becomes public.

That would be nice.