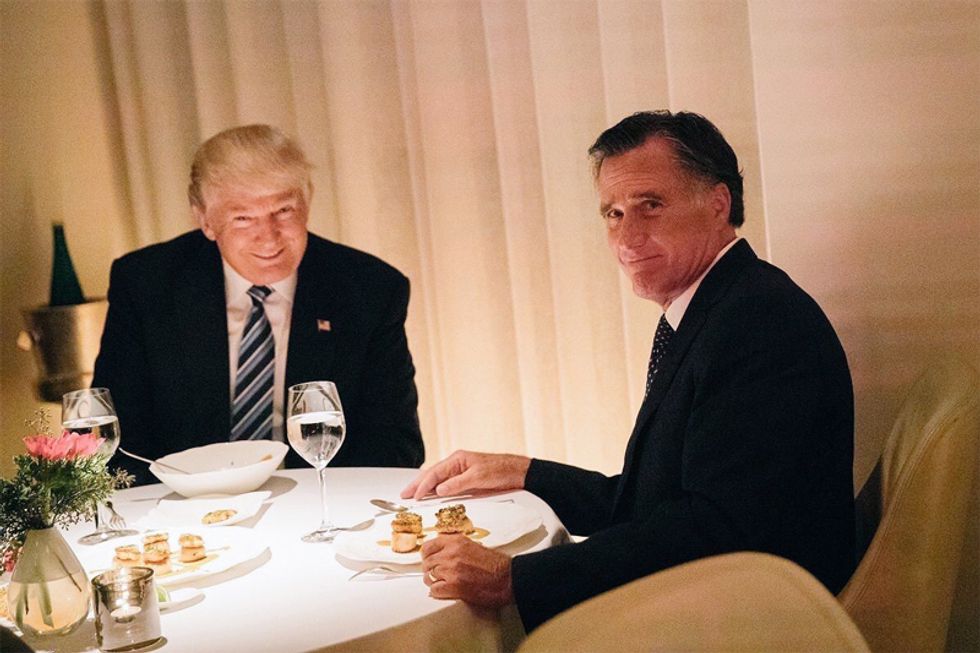 Utah Republican Orrin Hatch, the 83-year-old millionaire who's spent every day of his four decades in Congress fighting for less-fortunate millionaires, announced Tuesday that he plans to retire at the end of his current term. Mitt Romney responded to the news like one of Pavlov's dogs hearing a bell (inside a rooftop car carrier) and promptly switched his Twitter location tag from Massachusetts to Utah:

Hatch will be leaving the Senate even though Donald Trump and Steve Bannon have been pushing for him to stay forever -- as if he hasn't already done that -- because they don't want that liberal squish Romney in the Senate saying mildly unkind things about Donald Trump before voting with all other Republicans for tax cuts and dismantling the social safety net to sell to the lowest bidder. Romney -- apart from that purely coincidentally timed change of Twitter location -- hasn't made any public announcement yet of his plans, though he did post a generic "thank you forever for your service to the people of Utah and all us rich bastards" message on his Facebook.

Republican money people are already rolling out the OH HE'S GOOD AT BUSINESS meme for Romney:

“I think the field is pre-cleared. I think he still wants to serve,” Dan Eberhart, a wealthy GOP donor, wrote of Romney in an email. “I think we could use someone with his real world business experience in the Senate.”

That certainly would be a refreshing change from all those non-business millionaires already in Congress, as well as the "real world business experience" in the White House.

We were especially glad to see WaPo sought out the thoughts of former Utah congressman Jason Chaffetz, who, following the Pussy Tape, bravely and tearfully said he couldn't bring himself to endorse Trump because oh, how could he look his daughter in the eye -- then went right ahead and supported Trump. After a year of presumably avoiding looking at his daughter, Chaffetz said he thinks Romney and Trump could work together, since, after all, Trump "considered" Romney for secretary of State during the transition. Like Trump "considered" preserving Obamacare and the Paris climate accord. But if Romney somehow makes it into the Senate, says Chaffetz, Trump better know Mitt won't be any pushover, no way!

“Make no mistake about it: Mitt Romney is going to speak his mind if he thinks the president is saying or doing something silly,” Chaffetz said. “He’s going to express it.”

And then vote with all the other Rs, because while he may be no pushover, he has the firm convictions of any weathervane.

Still, Trumpworld is being cagey about whether the president would support a Romney candidacy or campaign, given Trump's frequent dismissal's of Romney as a loser because of Romney's criticisms of Trump as ungentlemanly and a cad.

Hatch, the longest-serving Republican in Senate history, was elected to the World's Greatest Deliberative Body in 1976, and quickly made a name for himself as "that one guy from Utah." In the '90s, he co-sponsored the Children's Health Insurance Program with Ted Kennedy; more recently, he got into a big fight with Ohio Democrat Sherrod Brown after Brown pointed out that the GOP tax cut would mostly benefit rich fuckwads, which made Hatch really mad since he grew up poor and has always been vaguely aware of the poor, or at least the ones who deserve help, which is precious few of them.

Topher Spiro of the Center for American Progress offers this overview of the legacy Hatch will leave behind, after having at least pretended to be bipartisan earlier in his career:

But let's not forget that Hatch actually has a long history of being awful, as Mother Jones reporter and Donna Rose's babbysitter David Corn reminds us of that time when Hatch "worked behind the scenes to defend a corrupt bank linked to money laundering. What a statesman!"

How true this is! Back in the late '80s and early '90s, Hatch ran interference in the Senate for the Bank of Credit and Commerce International (BCCI), which was the focus of all sorts of fun financial scandals at the time, what with the money laundering and the financing of dictators and terrorists, and he also helped a buddy get a $10 million loan from BCCI. So, you know, Hatch didn't just appear out of nowhere and start helping rich assholes; he's got him a pedigree, dammit.

Oh, and while we're at it, while Utah is overwhelmingly Republican and seems likely to go gaga for Mitt, or at least sigh in resignation and fill in the little oval for him, there actually is a Demmycrat running for Senate this year, Jenny Wilson, a Salt Lake County Councilwoman who has also worked as a top aide for a couple of members of Congress. And like Mitt Romney, she even worked on saving the 2002 Winter Olympics, although the similarities end there -- she didn't then go on and specialize in buying up failing companies, firing all their employees, and getting rich in the process. Weird.

Yr Wonkette is supported by reader donations. Please click here to put food on our family.