Out Like Flynn: Trump's National Security Adviser Resigns To Spend More Time With His Conspiracy Theories 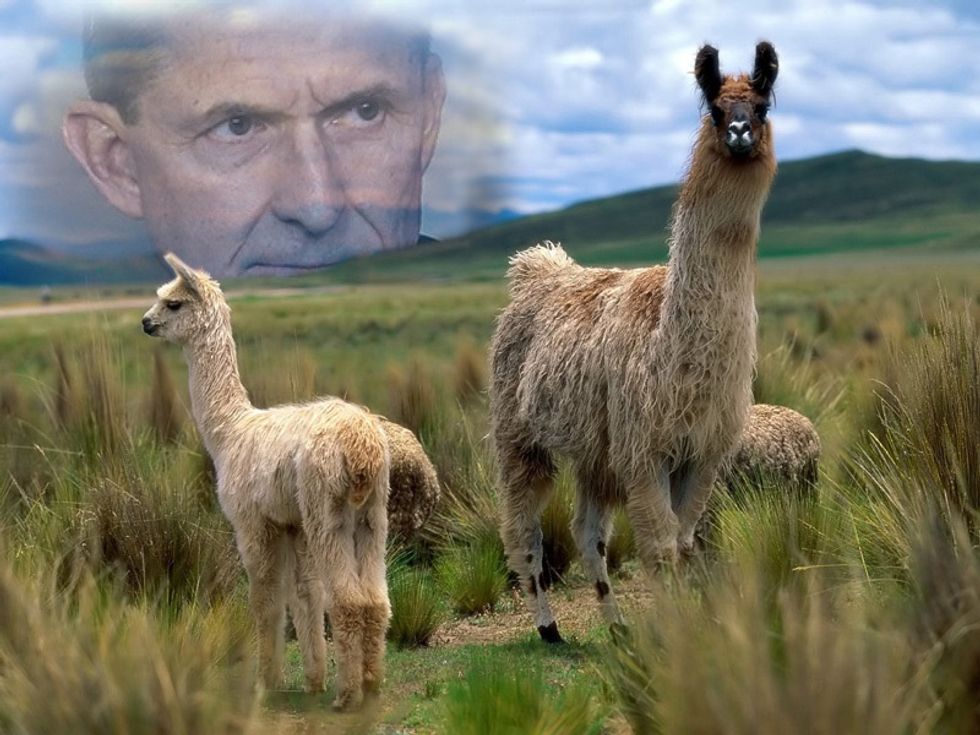 Michael Flynn in the Sky With Llamas

Well, then. One of the more odious crazies in the Trump administration, National Security Adviser Michael Flynn, abruptly submitted his resignation Monday night after it became clear he had fibbed to Mike Pence and other White House officials about the nature of his conversations with the Russian Ambassador in December. Flynn had insisted that he definitely hadn't discussed sanctions against Russia in retaliation for its interference in the U.S. elections -- in phone calls on the very day President Barack Obama announced those sanctions -- but we learned last week that he had not only discussed the sanctions but had in fact urged the Russians not to take any action in response, hinting that once Trump took office, the sanctions might be rolled back. So that's one of the bigger loons gone; here's hoping we get some phone records showing Steve Bannon was having phone sex with illegal aliens. Hillary-supporting Muslim illegal aliens. Who were committing voter fraud.

Trump had not directly commented on the Flynn matter, and at a joint press conference with Canadian Prime Minister Justin Trudeau Monday, called only on two friendly reporters who asked softball questions; Trump walked out as other reporters called out questions about whether he still trusted Flynn.

In his resignation letter, Flynn said it was all an unfortunate oversight that cropped up while he was making phone calls to "facilitate a smooth transition" and pave the way for good relations between Trump and foreign leaders. But he had a little oopsie:

Unfortunately, because of the fast pace of events, I inadvertently briefed the Vice President Elect and others with incomplete information regarding my phone calls with the Russian Ambassador. I have sincerely apologized to the President and the Vice President, and they have accepted my apology.

And no, he didn't admit any wrongdoing beyond that "incomplete information," are you kidding?

The Trump administration Monday afternoon was a low comedy of competing statements from different spokespeople. On MSNBC, Kellyanne Conway said Flynn had the "full confidence of the president"; within an hour of that, press secretary Sean Spicer said only that "the president is evaluating the situation" and that Trump would consult with Pence and others about Flynn's future.

Flynn's resignation came just hours after the Washington Post reported acting Attorney General Sally Yates had warned the Trump administration in late January that Flynn hadn't been honest about his phone contacts with Ambassador Sergey Kislyak, and could be at risk of being blackmailed by Russia as a result. It's not clear what, if anything, Team Trump did with that information other than sit on it while Flynn continued to be one of Trump's closest advisers.

In the waning days of the Obama administration, James R. Clapper Jr., who was the director of national intelligence, and John Brennan, the CIA director at the time, shared Yates’s concerns and concurred with her recommendation to inform the Trump White House. They feared that “Flynn had put himself in a compromising position” and thought that Pence had a right to know that he had been misled, according to one of the officials, who, like others, spoke on the condition of anonymity to discuss intelligence matters.

A senior Trump administration official said that the White House was aware of the matter, adding that “we’ve been working on this for weeks.”

OK then! Good to know they were on top of things. The officials who spoke to the Post said "they couldn’t rule out that Flynn was acting with the knowledge of others in the transition." The Washington Post was very careful not to make coughing noises while muttering "Trump! Trump!" So you just keep that sort of rank speculation to yourself. Also, it would be very improper to jump to any conclusions that the Trumpers colluded with the Russians during the election, although intelligence reports do indicate Flynn and Kislyak were in contact during the campaign. We bet they just talked about some of Flynn's other interests, like maybe his belief in Hillary Clinton's #Pizzagate child sex dungeon.

In addition, the New York Times reported Monday that the Army was investigating whether Flynn had accepted payments from the Russian government in 2015 when he went to Moscow to celebrate the 10th anniversary of the Russian network RT, where Flynn was photographed enjoying dinner with Vladimir Putin. (Flynn went on to be a commentator for RT's American network, although he's never really talked about his pay there.)

Such a payment might violate the Emoluments Clause of the Constitution, which prohibits former military officers from receiving money from a foreign government without consent from Congress. The defense officials said there was no record that Mr. Flynn, a retired three-star Army general, filed the required paperwork for the trip.

Trump has appointed retired Army lieutenant general Keith Kellogg as acting national security advisor. So while the administration goes shopping for a new full-time national security adviser (Kellogg? Maybe David Petraeus? He's pretty trustworthy as long as he's not diddling his biographer), it's not clear what's next for Mike Flynn. We hear Edward Snowden's apartment in Moscow may be available soon.

Also, now that he doesn't have a job, we're really doubting Mike Flynn will come through with a donation to help support Yr new ad-free Wonkette, so it's up to you to keep this little mommyblog and dick-joke emporium running. We know you have our backs, just like Mike Flynn knew he had the president's full confidence. Maybe even more!