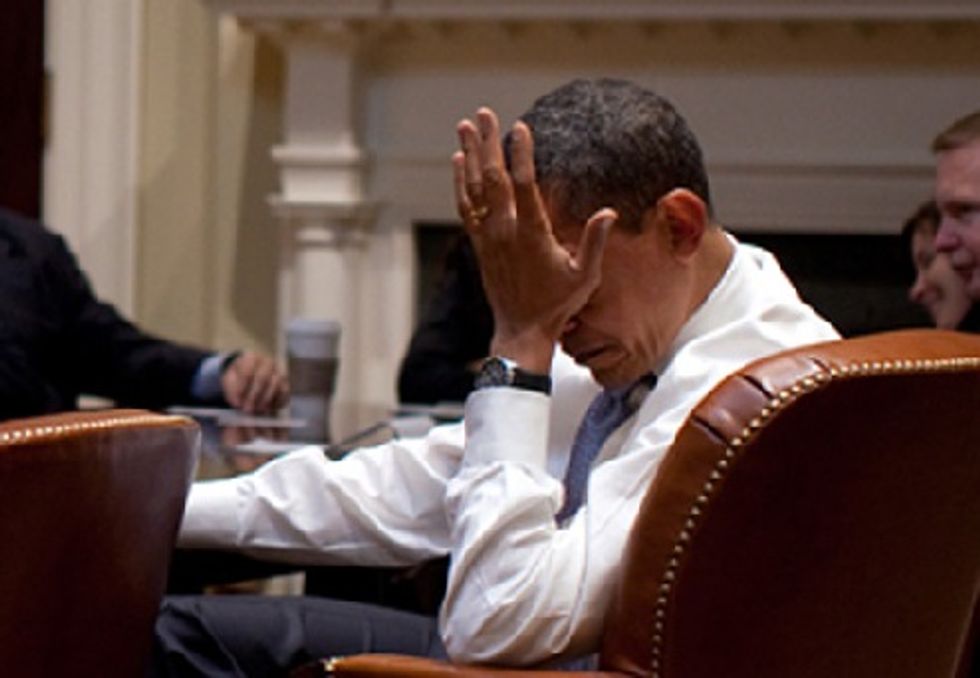 Here's where we are in America 2014: Scared shitless of a disease that isn't actually harming us, but that is killing thousands in Africa. The best way to make America safe is to bring Ebola under control in Africa, but now that we're determined to ignore people who understand the disease -- or paint them as part of a conspiracy -- we may actually be entering some weird Twilight Zone scenario where our panic to "protect" ourselves actually makes matters far worse.

Side rant: How many people just this week commented that it only makes sense to quarantine asymptomatic people "just to be safe," and then went to work while they have the flu? And how many people freaking out about the government not protecting us from Ebola also refuse to vaccinate their children, because freedom and Jenny McCarthy pseudoscience and some quack doctor says it's okay to skip vaccines if it makes parents feel better -- and they don't care how many people they expose to diseases that should be extinct, like, let's say, whooping cough?

Texas congressmoron Blake Farenthold recently advised Americans to please stop listening to experts and panic right now about Ebola because, and yes he really said this, "Every outbreak novel or zombie movie you see starts with somebody from the government sitting in front of a panel like this saying there's nothing to worry about."

On NPR's Diane Rehm Show the other day, Dr. Anthony Fauci, the director of the NIH's National Institute of Allergy and Infectious Diseases, was on a panel discussing the current fad for quarantines. Fauci seemed downright exasperated -- and maybe on the verge of wanting to pound his own or someone else's forehead -- when he had to remind the other panelists that you really really cannot get Ebola from being afraid of Ebola, and quarantining people who have no symptoms does no good at all:

[Let's] just put a fact on the table. Since the beginning of this epidemic in March, two Americans have gotten infected in the United States. Both of them have been taking care of a very drastically ill person, Mr. Duncan, who died. Those were the only people who got infected. One more thing, Diane. Mr. Duncan was in the United States and was exposing himself to his family and others. None of those people have gotten infected.

Fauci has this crazy idea that setting policy based on "what-ifs" is actually a bad idea, because he is a scientist and doesn't have common sense. Never mind that common sense is wrong, and Ebola is not transmitted by being in the same subway car or Ebowling alley as someone who has been exposed to the virus but has no symptoms yet.

The idiocy has now spread south, where the American Society of Tropical Medicine and Hygiene is holding its annual convention in New Orleans next week. Big medical conference, going to be a lot of papers on controlling diseases, experts on infectious diseases out the wazoo (a major vector, actually), a chance for the best and brightest to touch base and Share Their Knowledge. And so, with the predictable dumbshittery that keeps Yr Wonkette in business, the Great State of Louisiana has sent a letter to the group's members telling them that they had better not come to the conference if they've been in one of the African nations affected by Ebola in the last three weeks:

The letter disinvites any registrants who’ve cared for people with Ebola in the last three weeks. “In Louisiana, we love to welcome visitors, but we must balance that hospitality with the protection of Louisiana residents and other visitors,” the state officials said.

There are 3,588 people registered to attend the meeting, though the society doesn’t know how many have recently been in Liberia, Guinea or Sierra Leone, where the outbreak is located.

“We regret that some of our attendees may be affected by the state’s travel advisory and we request your cooperation,” the medical group said in a letter to members.

The letter, signed by Secretary of Health and Hospitals Kathy Klieber and by director of the Office of Homeland Security and Emergency Preparedness Kevin Davis, asks that the snubbed healthcare workers will come on back at a later date when people won't be afeared of them: "We do hope that you will consider a future visit to New Orleans, when we can welcome you appropriately."

Thanks for holding a medical convention in our state, where we make policy decisions that aren't based on science! Why not consider moving here, so we can use your tax money to pay for schools run by voodoo practitioners, too! Come for the terrific Cajun cuisine, and stay for the snake-handling!

Sorry, Africa, it's starting to look like America's deciding to round up anyone who's been helping you -- for our own safety. They're free to go to Africa, of course, and they're heroes, but really, just to be on the safe side, we've got to take some common-sense measures to protect ourselves. And it might be a real shame if that means some healthcare workers start deciding it's not worth adding a month of quarantine to their volunteer time, especially if the frothing rightwing demonizes them and demands their arrest if they dare question the "common sense" protocols of rogue governors who are certain they know much more than any of those partisan hacks at the CDC.

Fortunately, unlike many of our esteemed leaders, the kinds of medical professionals who are inclined to go to Africa to fight an epidemic actually do have some courage and intelligence. But if we keep working at it, maybe we can slow down the flow of medical help enough that it takes even longer to contain Ebola and kills that many more people in the process.

Sucks to be you, Africa. But we have to take care of our own, even if we're not the ones at risk.