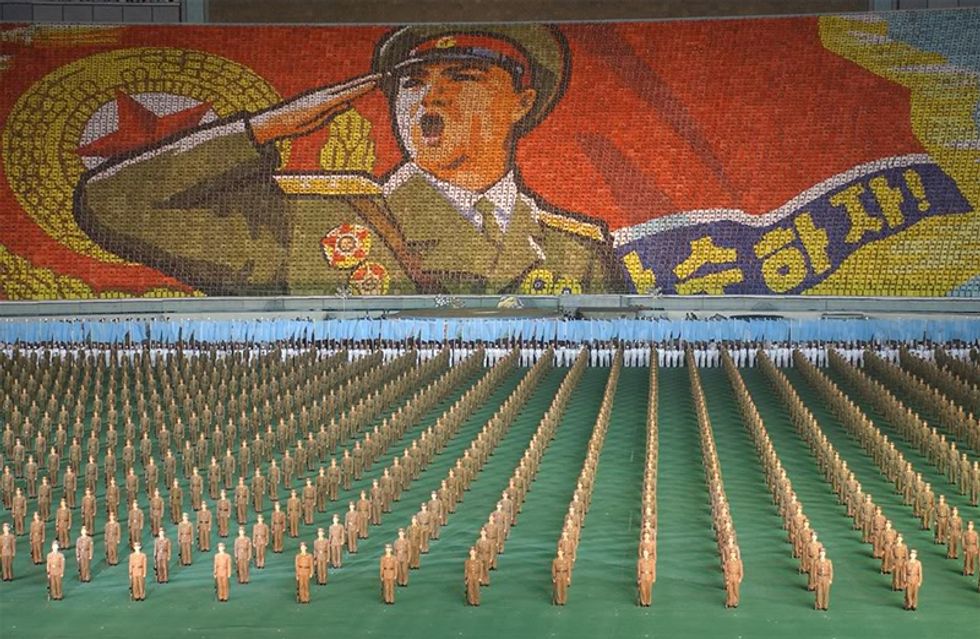 Might need some tanks and missile launchers for the parade, too

You might think maybe Donald Trump is possibly a bit overwhelmed by the sudden realization that he's in a job that he's utterly unprepared for, but Donald Trump doesn't do Overwhelmed, even when he clearly is. He does Denial. So of course he's having a great big campaign-style rally in Florida this Saturday so he can take his message directly to his supporters, who will all show up and slobber on him and prove through their love that he is indeed still winning, even though his administration appears to be setting a record for self-inflicted gunshots to the foot in its first month.

And that message will be exactly the same as always: He won a huge, historic victory even though the crooked media said he didn't have a chance and Hillary Clinton had millions and millions of illegal voters, and he'll keep on winning even though all his enemies keep leaking fake news about him, because he's the best. There, we saved you an hour (no, of course we're going to watch in horror anyway). Trump never really wanted to bother with the details of governing, and so far, he really seems to be meeting that goal, though god knows people seem to keep expecting him to answer questions and have policies and stuff, even though he's already signed all those beautiful executive orders. But it's not his fault -- the Senate won't confirm his cabinet nominees, and all those holdovers from the Obama administration keep undercutting him. Now, to be sure, he might have some responsibility for the understaffing, just maybe:

So clearly, it's time for a rally, because America needs one. Or at least Donald Trump does, since there are clearly not enough people in the White House telling him he's wonderful. He'll get to yell at the media and enjoy seeing his followers turn around and jeer at the press pen, tell some lies about how he's been more successful in four weeks than most presidents were in an entire term, and repeat all the promises and grievances he knows his Flying Monkey Brigade will eat up like meth. He might even talk about how huge his inauguration crowd was. If he's really lucky, there'll be some protesters to be thrown out -- or perhaps executed on the spot; he's still checking with Bannon on whether he's allowed to do that.

Unfortunately, as New York Times reporter Sopan Deb notes, he won't be able to repeat one of his classic riffs from the fall campaign, because now he's the showman with the government jet flying all over at public expense:

Trump may also find time to play some golf this weekend, but that's different. He works hard and deserves the break. And as WaPo's Phillip Bump points out, even if his approval ratings are in the toilet, Trump can always point to the size of the crowd as proof that America still loves him. With a huge crowd like that, surely nothing else matters, and everything is OK.

Oh, and if you're not in the mood for a rally, Robert Reich would like to remind you use your weekend to drop by your member of Congress's office with some friends and a camera phone:

Attend the town halls of your members of Congress, coming up soon. Watch our latest video with Indivisible to find out how. pic.twitter.com/eeO0CUeMYx