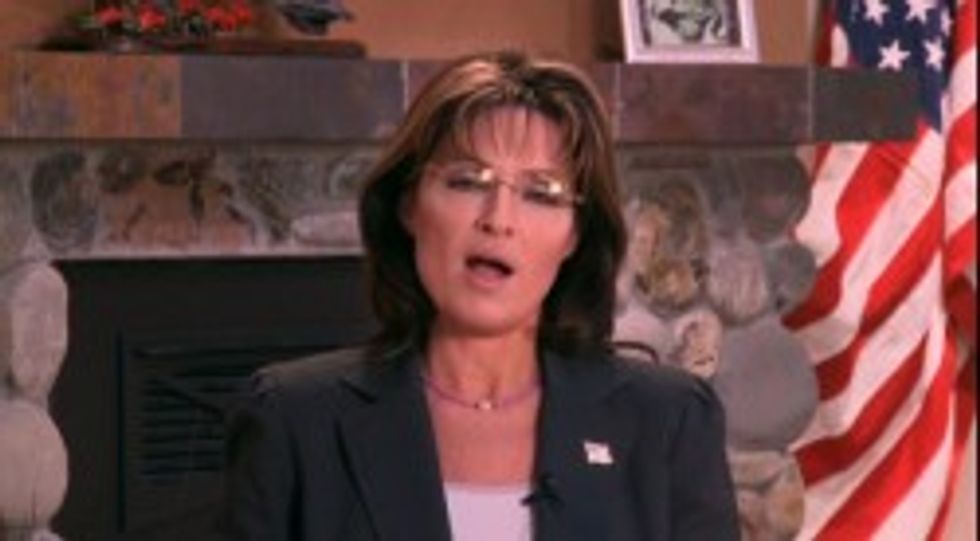 In the absence of Sarah Palin saying anything about whether she will run for president, her followers arewalking around the Iowa cornfields as un-anointed apostles canvasing for their mysteriously quiet snowbilly messiah and waiting for her sign. What else has anyone even got to do these days, except wait for signals from space monsters? Nothing, except quit life to go shake hands with every person in Iowa to tell them all about the celestial love of Sarah Palin. It's a hard job -- they do not even have bicycles, like those Mormons -- but someone must toil and spend money to lay Iowa groundwork for Sarah Palin if she refuses to do it herself.

[Palin supporter Peter] Singleton, who is not independently wealthy, says he is making a significant financial sacrifice by volunteering almost all his time to a campaign that does not yet exist -- and may never. That uncertainty raises one delicate question: If Palin has already decided against a White House bid, as many political observers have concluded, is it callous of her to tacitly encourage Singleton, McCormick and the untold number of other supporters to continue setting the stage for her?

Last Tuesday in Pella, Palin had an opportunity to signal to those devoted volunteers to pack up and go home when asked by this reporter what she thought about their efforts. Surrounded by a crush of supporters and journalists on her way into the cookout, Palin instead replied that she "greatly appreciated" the efforts of volunteer organizers, especially because of their willingness to support someone who is "untraditional" and "not a part of the Republican establishment."

This encouragement is certain to inspire them to redouble their efforts going forward.

Yeah, keep your efforts going, the Rapture is on its way or whatever happens when Sarah Palin actually decides to run for president. [RealClearPolitics]