Papa John's Is Still A Douche, And Other News From Corporate America 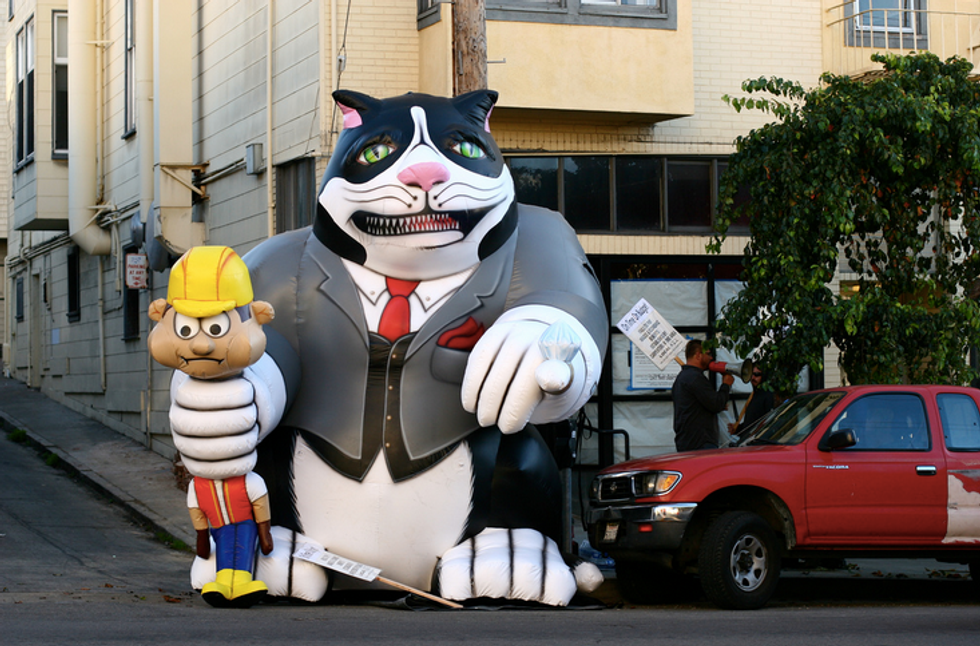 Labor Day. A time for parades, cooking meat over fire, and passive-aggressive swipes at workers by shitbird Republicans. It's also an excellent time to check on how our favorite corporate persons are treating their pesky working stiffs.

Good news, Dronebots! Companies like Microsoft and Netflix are expanding parental leave benefits for some of their (mostly white collar) working stiffs. HOOray. This is truly nice even if the eligible parents are the ones most likely able to afford au pairs, night nurses and peek-a-boo consultants. The other 90 percent of new parents are likelier to remain one missed double shift away from hawking that new diaper bag for a bus pass.

One of the well-established exceptional features of Love It Or Leave It Land is an enduring commitment to imposing as much stress as possible on a working mommy who just passed a watermelon-sized object through her vagina or had it sliced out of her abdomen. No biggie, right? Despite a handful of state and local protections, we remain one of only three countries without some form of guaranteed paid parental leave. Along with our global paid leave-denier pals Suriname and Papua New Guinea -- the Axis of Medieval -- it's clear that our politicians believe that compensating these procreating Takers will be a huge burden to our beloved Creators. Lesson: Make Jobs, Not Babies.

So what if studies show paid leave correlates to drops in infant mortality? Not a fetus, not our problem? Or if childbirth forces parents out of the workforce? Or into unsolvable debt? Or to cobble together a garbage salad of disability, vacation days, sick time, banked PTO and fabricated Mormon holidays just to afford a couple of extra weeks with a wailing infant who doesn't comprehend why mom's employer has to be such a prick?

Whatever the motivation (hint: keeping talent to ensure continuity and cha-ching more $), it's excellent that more than 12 percent of the private sector work force is now eligible for paid leave. Whether or not they're encouraged to use said right or alternatively rub some dirt on that severed paternal bond and get back to fucking work probably depends on the employer. After all, Yahoo! CEO Marissa Mayer is expecting twins and making it very clear to her employees that with virtually no leave time, she's going to be the best mom to her three kids, and run a Fortune 500 company while also probably working out every day and taking cheese-making classes. Bully for you, Marissa.

In the non-CEO sector of the labor market, wages have been mostly stagnant since around the time when Reagan saw Saturn in Libra and thought that meant he needed to arm any aspiring Latin American dictator. On top of these dated wages, our corporate overlords continue to siphon their own employees' owed compensation. And one company just can't shake the itch, man.

"Papa" John Schnatter is a man with a last name befitting a product that resembles psuedopizza discharge. The obscenely rich free market romantic must be busy helping Ann Romney with her next gross cookbook because chaos continues to reign on the front lines of his Kind-Of-Food-I-Guess Empire.

Mere weeks after paying $12 million to settle a 2009 class action suit brought by under-compensated delivery guys, Papa John's finds itself at the center of yet another wage theft investigation involving one its New York franchisees.

New York Attorney General Eric Schneiderman, along with the U.S. Department of Labor’s Wage and Hour Division, announced charges today against BMY Foods Inc. and its operator for allegedly failing to pay minimum wage and overtime to approximately 300 current and former employees.

[...] When employees’ weekly hours reached 35 or 40 per week, they were allegedly required to use the fictitious names so that the employer’s failure to pay proper overtime for these hours would be concealed.

"Welcome to Papa John's, my name is MacGyver P. Straight Time. Can I take your order?"

This is not the first time a New York Papa John's has been busted for being total knobs and pinching its employees pennies. It won't be the last time either, but is there possibly a ray of hope for the $8.25 per hour employees who have to suffer the indignation of getting robbed by their own bosses AND going home on a nightly basis smelling like Papa John's?

Despite the occasional class action or franchise prosecution, Schnatter can retire to his obscene mansion on a nightly basis and relax in a game-worn Peyton Manning jersey with general impunity relative to the deeds of his franchise owners. But the National Labor Relations Board has other ideas that might help lessen the estimated billions of dollars stolen from poor American workers by their employers.

The NLRB said Thursday that a Silicon Valley recycling center was a "joint employer" along with the staffing agency that provided the center's workers. The ruling determined that companies using workers hired by another business, such as temp agencies, contractors or even fast-food franchisees, are still responsible for labor violations and could be required to bargain with unions representing those employees.

Hey, that sounds logical. Should revenue expectations placed on franchises that drive shady labor practices really concern THE Papa John? Or should Schnatter get to have his cake and not eat his gross pizza too? In the end, this reasonable ruling might saddle our corporate persons with the "personal responsibility" they love to preach to anyone in earshot.

This alone might be ok, but tsk tsk NLRB. The real problem for some right wing boners is that this ruling could open the door for some widespread union thugging and organizing. And anything that prolongs the labor movement's death rattle probably won't sit well with the Koch brothers and the shitty pizza magnates who donate to their political ventures. But a movement can dream ...

Keep fighting, Corporate People. There are still more bodies to fatten, bodies to shake down, and bodies of water to pollute. Labor Day is only once a year. Keep those chins up.