Parrot Pining For The Witness Box, May Provide Evidence In Michigan Murder Case 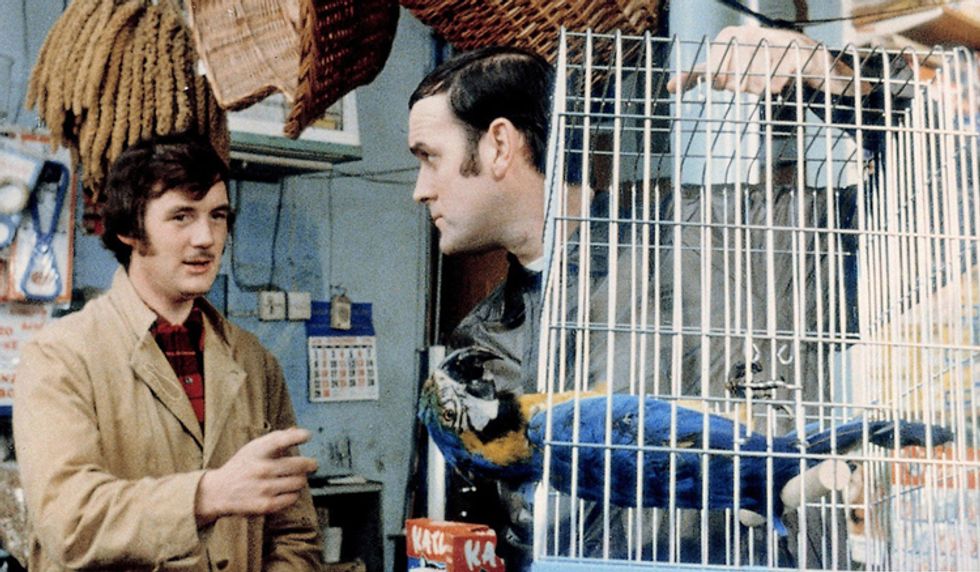 This is an ex-parte! Err, parrot!

A foul-mouthed African grey parrot named Bud might be entered into evidence in a Michigan murder trial, maybe. Probably not, but maybe. Bud may have overheard the murder of his owner, Martin Duram, in 2015, and since shortly after the murder, the parrot been repeating what sounds like an argument between a man and a woman, ending with the phrase "Don't fucking shoot!" That last line is apparently Bud's favorite phrase. Newaygo County Prosecuting Attorney Robert Springstead told the Detroit Free Press that he's at least considering whether Bud's parrot talk could be admissible evidence.

“It’s an interesting novelty and it’s been a great opportunity for me to learn about African parrots,” he says. “It is something we are going to be looking at to determine if it’s reliable to use or if it's information we need to prosecute this case.”

Martin Duram's wife, Glenna, was charged last week with killing him, after which she shot herself in the head in an unsuccessful suicide attempt. Glenna Duram was Martin's caretaker, and police interviews with family members obtained by WXMI indicate that they often argued; she would sometimes comment that she was "just waiting for Marty to die to get all his money." State police say they found three suicide notes written by Glenna Durham, and that the gun used in the shootings belonged to the family; she denies killing her husband and has no memory of the shooting.

So obviously, the parrot is the best possible witness, at least if the world is a really bad movie.

“It’s intense,” she added. “When it happens, my house turns cold.”

Keller had no comment on the bird's beautiful plumage, which don't enter into it.

Springstead told a Michigan teeveee station last week that there's no precedent for using a parrot's words as evidence, saying he

“highly doubts there is any precedent” for using a bird’s speech as evidence. When a judge asks someone to raise their right hand, he wondered, “to a parrot, are you raising a wing, a foot?”

This would be especially difficult if the parrot's feet had been nailed to the perch, a step that has not been taken considering that Bud has not rung down the curtain or joined the choir invisible. It's his former owner, after all, who's pushin' up the daisies.

"It's definitely an argument between a man and a woman," she said... "In my mind, it's something that he's heard, definitely heard before."

The Washington Post dutifully notes at least one legal expert (if we were a TV news station, we'd call him a "legal eagle," but we are above that sort of thing -- just barely) doubts whether Bud's vocalizations would be admissible as evidence:

Michael Walsh, a Muskegon, Mich., lawyer, told WOOD-TV that the bird is inadmissible because there’s no way to trace his dirty mouth.

Sadly, Walsh didn't then follow his analysis by insisting that any district attorney attempting to use a bird as evidence would soon find their case bereft of life, gone to meet its maker, off the twig, and all in all, an ex-prosecution. Then the police would step in and bring a sudden end to the proceedings, declaring them extremely silly.