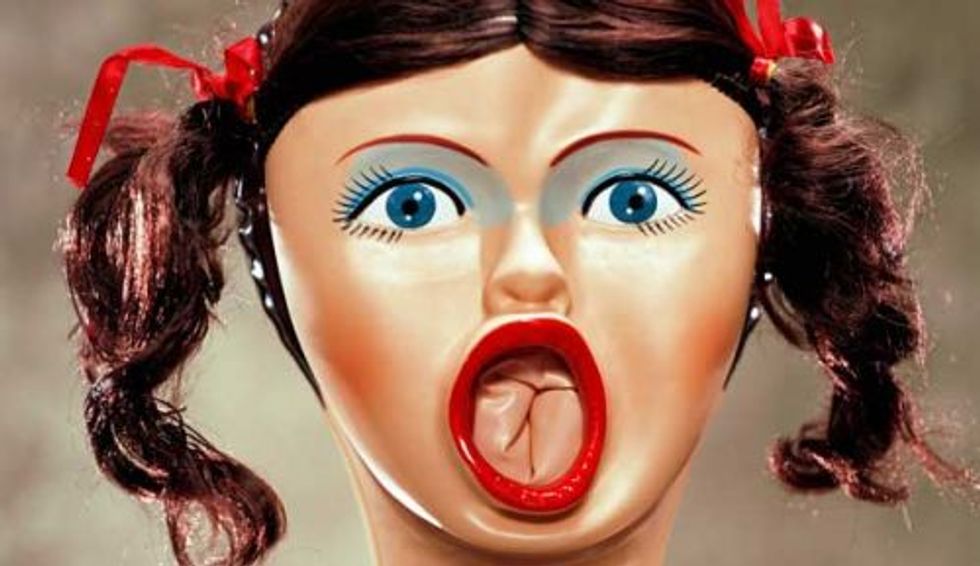 Ladies, it’s all your fault. Hopefully you realize this by now, because all the evidence is clear, and there is literally nothing that cannot be blamed on you. Like how you will divorce your husband just because he is having penile-vaginal relations with another woman, when it’s obviously your fault he was cheating in the first place!

Det Bowers, a pastor challenging Lindsey Graham in the South Carolina GOP Senate primary, once blamed women for causing most divorces -- even when husbands are unfaithful to their wives.

You’ll never guess the reason. (Hint: It is blatant woman-hating sexism shrouded in a thin veneer of self-righteous religious bullshit.)

It is because of ladies’ Love Most Foul. For children. Fucking kids.

We are not kidding. Women love their kids too damn much. And we do not use the word ‘damn’ lightly, for we have been told that women loving their kids too much is “an abominable idolatry.” No, really.

During a sermon on the Book of Peter delivered at the Christ Church of the Carolinas, Bowers said it was an “abominable idolatry” when wives love their children more than their husbands, arguing that’s what causes divorces most of the time. He added that in the “vast preponderance” of situations where men are adulterous, women are to blame because they have showered too much emotion on their children instead of their husbands.

If ladies would spend less time changing diapers on kids, maybe grown-ass men wouldn’t be compelled to don diapers for hookers. Can we get an amen?

Does the good pastor go on? Oh yes, he does indeed:

Bowers added, his voice rising: “Do you hear me ladies? It is an abominable idolatry to love your children more than you love your husband, and it will ruin your marriage. And yet you blame it on him because he ran off with some other woman! He did run off with some other woman, and you packed his bags. All of his emotional bags, you packed for him.

Stop packing his emotional bags, ladies! Stop pushing your husbands into the arms of other women by showering your kids with love! For the sake of your marriage, slap the little buggers every now and then! Scream at them to fuck off so you can go reverse cowgirl on daddy. SCREAM AT THEM FOR JESUS!

But wait. Perhaps we are being too harsh (we are not). Perhaps Bowers can say something to redeem himself (he cannot). Let's see:

“You just ran him off. You paid more attention to your children than you did to him,” he said. “‘Oh, he doesn’t need me?’ He needs you more than they do. He chose you, they didn’t. An abominable idolatry.”

You see?!?! Your kids didn’t choose you! They are just grubby little shit-producing takers, and they will take your marriage from you if you let them! Your husband needs you (and your orifices), for men have no self-control whatsoever and will fuck something every 3-5 days, and if wives are too busy feeding kids and taking them to the doctor, then husbands will boink whatever comes along -- man, woman, stray farm animal, current U.S. Senator -- and it will be ALL YOUR FAULT.

But let’s be real. Does this whackjob really have a chance?

“So Det Bowers is looking like he could be the strongest challenger to Lindsey Graham it seems,” Erick Erickson, founder of the conservative website Red State, tweeted on Thursday.

Really, South Carolina? This is the best you have? Your state really is the armpit of the nation.

Can you imagine Bowers’s Senate floor speeches? Forget Obama being a pussy on his own. Now it will be Michelle loves Sasha and Malia too much, which is why Obama is secretly getting ass-fucked by Vladimir Putin, both metaphorically (in Ukraine) and literally (Lincoln Bedroom). Can we impeach a First Lady? Maybe Bowers can help us find out.

In reality, Graham is likely to win both the GOP primary and the race in November. But it’s good to know that the good people of South Carolina have helped Bowers raise almost half a million dollars, because if there is anyone worthy of your political donations, it is this guy.