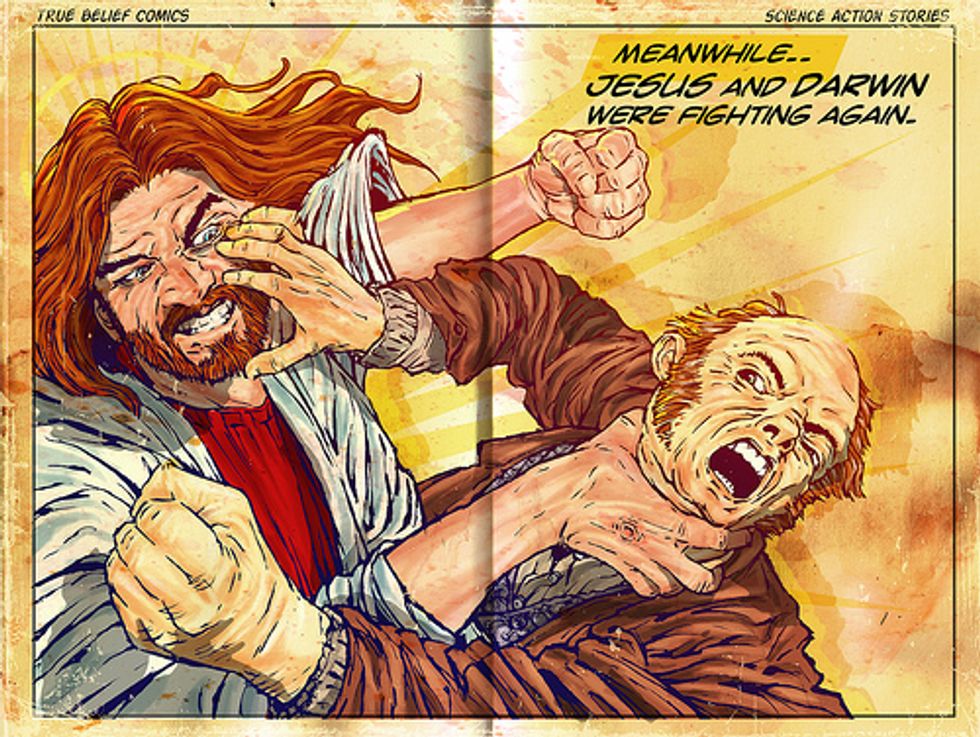 We always enjoy a good wingnut-on-wingnut squirmish, and here's a dandy: "Young-Earth" creationist Ken Ham, the squirrel (or perhapsCronopio dentiacutus) who "debated" Bill Nye at the Creation Museum a while back, is very, very cross with fellow rightwing Christianist Pat Robertson because Robertson recently said that the Earth is not, in fact, six thousand years old. Ham said that Robertson's rejection of the literal truth of the first chapters of Genesis was Bad For The Christians:

“Sadly, it’s Pat Robertson who makes Christianity look silly, which is why the atheists love him today,” Ham said. “What a travesty! This man uses his position on a major Christian TV program to help the atheists mock God’s Word!”

Now, now, Ken: we love you both, and we don't play favorites. Better?

The internecine not-niceness was sparked Tuesday when Robertson told a caller to his 700 Club TV show that "Young Earth Creationism" (YEC) was nonsense, though it had been simmering since at least 2012, when he openly rejected the Young Earth crowd; more recently, in February, he also called YEC "a joke." On Tuesday, he said that the overwhelming scientific evidence of the Earth's age can't be denied:

“You have to be deaf, dumb and blind to think that this Earth that we live in only has 6,000 years of existence, it just doesn’t, I’m sorry.”

“To deny the clear record that’s there before us makes us looks silly,” he said. “There’s no way that all this that you have here took place in 6,000 years, it just couldn’t have been done, couldn’t possibly have been done.”

RightWingWatch points out, however, that Robertson's own TV network also promotes YEC, but hey, we've never really expected a lot of consistency from ol' Pat anyway. In any case, his embrace of science only goes so far -- he's still kind of a creationist, he just accepts the age of the Earth as a real thing, and figures that maybe the "Days" of creation could cover billions of years. Besides, even if there was evolution, why not just assume that God directed it? (What a dangerously Catholic thought!)

Well the secularists love Pat Robertson today! A number of them are posting a section from CBN’s "700 Club" program today (Tuesday) on YouTube and on various websites. They love it that Pat Robertson has once again used his "700 Club" program to engage in name-calling as he attacks those of us who take Genesis as literal history (as it is meant to be taken—as Jesus takes it).

Ham explains everything wrong with Robertson's science, starting with the obvious heresy:

So, Robertson has called all of you who believe God’s Word as written in Genesis as “deaf, dumb and blind.”

Also, Robertson mentioned "radiocarbon dating," which has nothing to do with "millions of years" (which is true -- though other methods of radiometric dating do).

Finally, Ham is just plain aghast at Robertson's ignorant attempt to put limits on the Almighty. If Robertson thinks "There’s no way that all you have here took place in 6,000 years. It just couldn’t have been done," then Robertson is probably some kind of atheist himself:

Really Pat Robertson? You mean there is no way God, the infinite Creator, could not have created the universe in six days just six thousand years ago? God could have created everything in six seconds if He wanted too! And it's not a matter of what you think anyway--it's a matter of what God has clearly told us in His infallible WORD!

According to Ham, Robert's compromise with the evil lies of science is Why Christians Can't Have Nice Things:

So for Heaven's sake, Pat Robertson -- and the sake of your own immortal soul -- stop making Christians look silly! Ken Ham has got that taken care of all by himself.