Pat Robertson: Jesus Wants You To Divorce Your Wife If She Won't Put Out 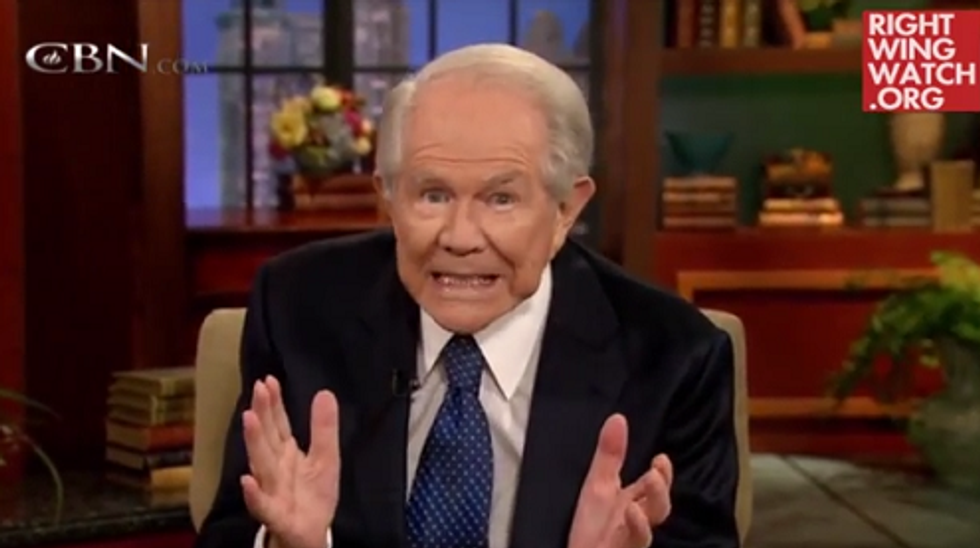 Pat Robertson has had quite the week. After sounding the alarm about the apocalyptic asteroid event that could happen next week, or ever, Robertson advised a 700 Club caller that his wife probably withheld sex because of childhood sexual abuse, and that obviously, the caller should just divorce her. Given that surveys have shown that 43% of women recount experiencing sexual dysfunction and 32 percent of mothers report going years without sex, we now expect to see a lot of 700 Club-inspired divorces as husbands ditch their frigid wives.

This makes Pat Robertson worse for marriage than Dan Savage, who just thinks you should cheat.

This new stance on divorce is real not-progress for Robertson: it seems that previously he believed the only legitimate reason to get a divorce was if your wife gets sick, because it's kind of like death, but not. But, apparently, when reviewing the Scriptures, Robertson found another loophole! God also condones divorcing your wife if she doesn’t put out. Especially if she doesn’t put out because of an emotionally scarring sexual assault. Cut your losses, gentlemen.

But that's not all! Another unthinkable thing happened this week: one of Robertson’s doctor friends channeled the power of God to bring the dead back to life. That’s right, it was just like an episode of a show no one watches, Resurrection, except nothing like that, because in this story a surgeon lost a patient, and then jeebus spoke to the doctor and told him to “go back and treat him again” and then “the power of God hit him and the man came back to life again.”

Some of the more skeptical among us think this sounds a little like using a defibrillator and Pat Robertson is, like, 112 years old, so it seems reasonable to cut him some slack and assume that he doesn’t understand these newfangled technologies. But, don’t believe those jerks, Pat Robertson assures you that Pat Robertson can “do the science”.

For us liberal, pinko, lesbian communists, these tasteless little vignettes simply confirm that Robertson can barely open his mouth without something crazy and/or hateful falling out, but for others Robertson is the key of bringing young people back into the Republican fold.

According to super-smart Nevada state assemblyman Ira Hansen, if the GOP would just follow the teachings of Pat Robertson more closely, all the young peoples would vote for them extra hard. Because, values!

After the Nevada GOP voted to become less hateful, by removing the anti-gay, anti-abortion rhetoric from their party platform, Ira put forward the novel theory that if the Nevada GOP wants to lure in the young folk they need to return to their Pat Robertson roots and stop alienating young people with their wishy-social policies.

We don’t see that younger recruitment into the party. I think they are actually being alienated partially by this absence of values. I also think as people get older, they lose some of their drive to fight, I think that’s even true of the pro-life, traditional marriage type crowd... in 1988, and that was when there was a huge fight here in Nevada between the Rockefeller wing of the party, as I call them, and the Pat Robertson wing. And with time the Robertson wing won and you had these social issues openly adopted by the Republican Party. And, by the way, in the ‘90s and 2000s, the Republican Party actually did very, very well in Nevada with those in the platform.

What this has to do with today, given Nevada's shifting demographics, we are not sure. We have not been hearing that the 700 Club is suddenly killing it in the crucial 18 - 34 year old demographic. Maybe because Robertson's positions kind of suck - stoning teh gays and blaming our problems on Satan just isn't as cool as it used to be. ‘Course, it turns out, somewhat shockingly, that  both Pat and Hansen are in favor of decriminalizing marijuana, which is almost enough to make us change sides in the debate, so maybe they should get together and join the 2016 primary.