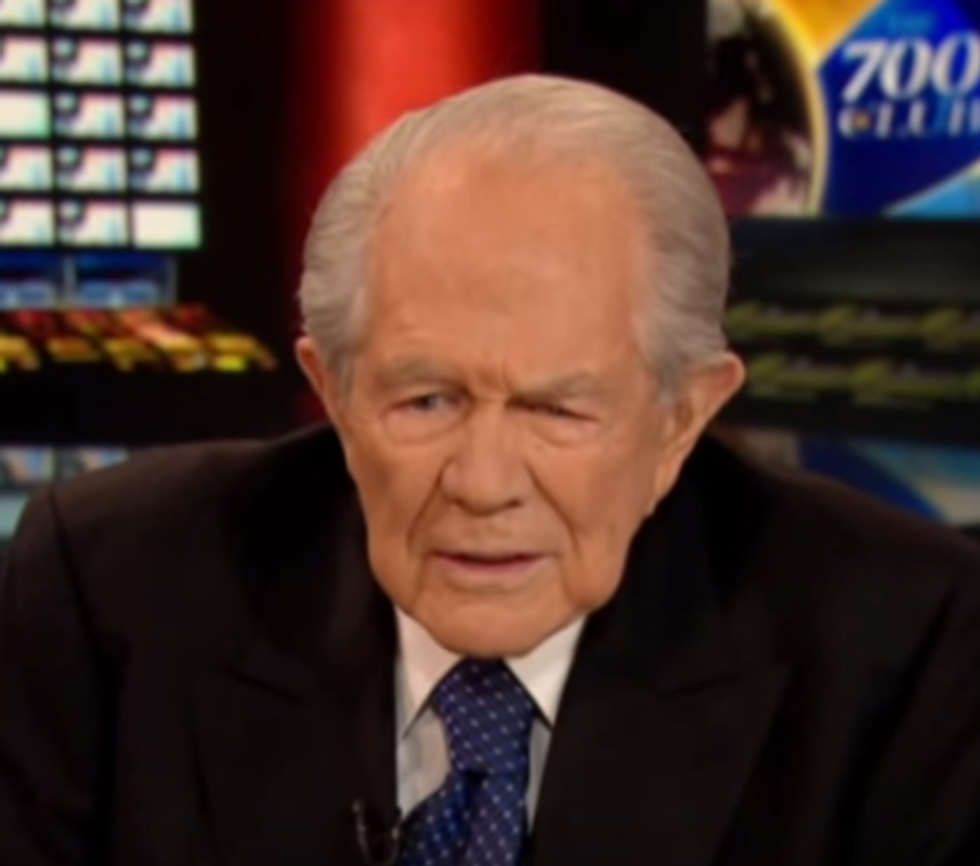 UH OH SHOTS FIRED! Grandpa Pat Robertson is real glad Kim Davis is standing up for Jesus Christ's true message, which is "PEEEEE-YEW! Notice how I never said Blessed Are The Icky Homos? They're the BEATITUDES, not the BE-FAG-ITUDES." (Exact quote from the book of John.) But -- and Pat's trying to be a gentleman about this -- the sad fact is that Davis is less than ideal as a messenger of God's divine wrath against the homosexuals, due to how she is ... well, you know ladies of A Certain Kind ... what he's trying to say is that she's a Slutty McSlutterstein who is the mayor of Slut Town, which is the capital of Whore Island:

Kim Davis is not exactly the champion we'd all want to stand up for our beliefs, but nevertheless she did it and she's the heroine of the piece.

Wonder what he's talking about. Oh maybe he means like how this one time, Kim Davis was married to her first husband, but she was fuckin' this other guy at the time, who we'll call "her eventual third husband," and he got her pregnant. Then she divorced Husband A and married Husband 2, whom we'll call "Joe," because that's his name. He adopted the fruits of her sexytime with her Eventual Third Husband. Then she divorced Joe and married her baby daddy, and then she divorced HIM, because she wanted to marry Joe again, for the SEXXX.

Pat continued, saying that "there'll be many, many others," and he did not add that he really is praying to Jesus that they're not all reformed whores like Kim. Guess that's just between Pat and his prayer shawl.

Earlier in the interview, he explained that this is all happening because (we seem to be hearing thisa lot lately!) it's now a crime to love Jesus so much:

We are a Christian nation. What Huckabee said, the criminalization of Christianity, can you believe 100 years later, 150 or 30, 40, how many years it is, later, Christianity, the founding principle of this nation, is criminalized. You go to jail if you believe in God.

Wow, guess we're going to need a bigger jail! Have we really, as Mike Huckabee seems to believe, criminalized Christianity? Because 3 out of 4 Americans still believe in God, which leads us to believe maybe these gentlemen are being, in scientific terms, giant fucking queens about all this. Kim Davis went to jail, FOR THE ZILLIONTH TIME, because she is an elected official who refused to do her job, even after multiple courts told her to do her job, and she was held in contempt. If she would just resign, none of this would be happening. Davis would be free to do a different job, like crocheting Bible cozies with cupholders for 40-ounce Michelob Light bottles, to sell on Etsy, or even Christian Mingle, if she has an account there. (Probably how she found husbands six and seven, who are still TBA.) But if she wants to be a public servant in the US and A, she has to abide by the law. SORRY IF THAT FEELS LIKE PERSECUTION.

These people are going to be so disappointed when they reach the pearly gates, and instead of "Well done, my good and faithful servant," Jesus says "MAN, you wasted your life being a real fuckin' dick, didn't you?" Or as the Bible phrases it, "I never knew you. Away from me, you evildoers!"