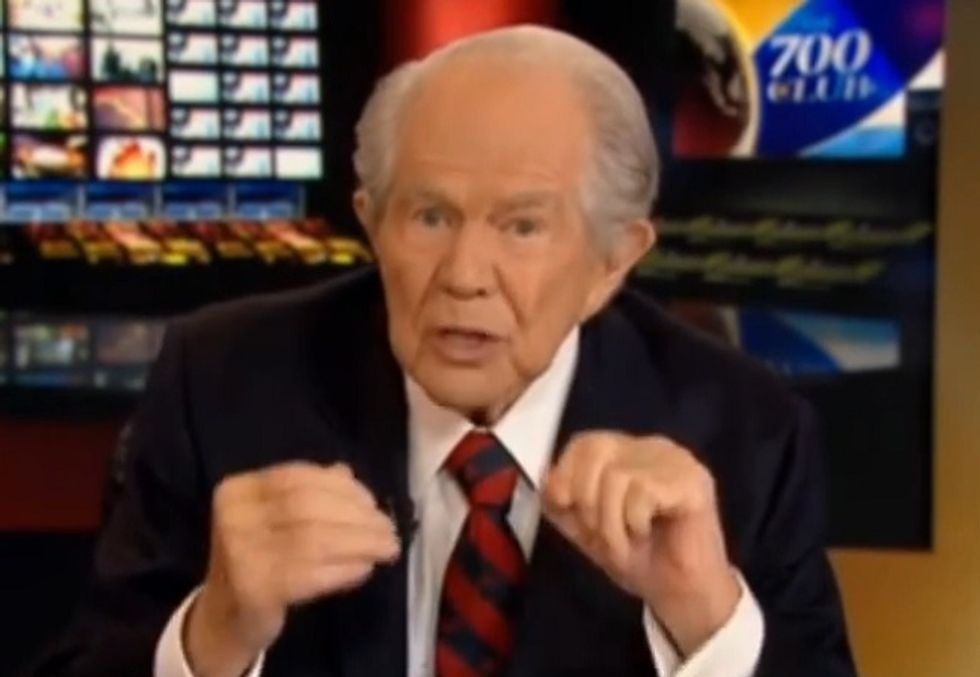 So here's more fallout from the maneuvering on the Big Budget Bill this weekend: After Ted Cruz's diddling with Senate rules opened the door for some of Barack Obama's appointees to be confirmed, televangelist Pat Robertson decided that he doesn't like this Ted Cruz fellow's radicalism, not one little bit. Yes, kids, Ted Cruz is a bit way out for the guy who claims he can steer hurricanes.

It's not exactly the silver lining we were looking for in a series of votes that ended up allowing Citigroup to gamble, risk free, with risky securities trading again, but we'll take what we can get.

First, the actual newsy news: In an attempt to throw Barack Obama's treasonous executive action on immigration under the Cromnibus, Ted Cruz launched a whole bunch of delaying maneuvers to keep the budget bill from coming to a vote. None actually had enough votes to pass, but they also kept the Senate in session into this week, which gave Harry Reid a little extra time as Majority Leader. And so Reid brought forward several Obama nominations that had previously been left hanging, just to have something to do. Among the nominees who should now get an up or down vote: Vivek Murthy, the nominee for surgeon general, whose nomination was nearly sunk by senators afraid of the NRA. No, Harry Reid isn't really much of a hero here, since he could have brought these nominations forward any time, but decided instead to push the Mary Landrieu Last Gasp Pipeline Act instead. Still, it's something.

And how's this for some collateral damage? Televangelist Pat Robertson, looking on in astonishment, proclaimed Ted Cruz a reckless wacko for opening the door to -- horror of horrors -- the Senate actually confirming presidential nominees:

“I tell ya’, this Ted Cruz, a lot of people in Texas just think he’s wonderful and I don’t want to rain on their parade but what he did was this, he held the Senate open by his delaying tactics and in the process Harry Reid says, ‘Oh, we’ve got some time, let’s rush through some appointees.’ So they started approving one after the other, left-wing appointments that Barack Obama had made that a more deliberative process would’ve held up, that was what Mr. Cruz gave us,” Robertson said.

Robertson didn't specific which presidential nominees he considered dangerous leftists. We're betting it must have been Daniel Santos's appointment to the Defense Nuclear Facilities Safety Board, a known hotbed of flaming communists. Or maybe it was Sarah Saldaña's nomination as head of Immigration and Customs Enforcement. What on earth is Obama doing, allowing someone with funny foreign punctuation in their name to watch the border?

In any case, Robertson was ticked, and he's not going to put up with this Cruz fella and his fake populism:

“This bomb-throwing stuff and ‘I’ll be a lone wolf and I’m the man in the Senate who is going to be like Jimmy Stewart and I’m just going to Washington to represent the people,’ it’s nonsense.”

Listen here, Mr. Cruz, fake populism is Pat Robertson's brand, and nobody else is gonna horn in on it.

In addition to this call for a return to moderation and reason, Robertson's 700 Club broadcast also featured Robertson telling a man not to see a doctor since he's already "asked God to be your physician."