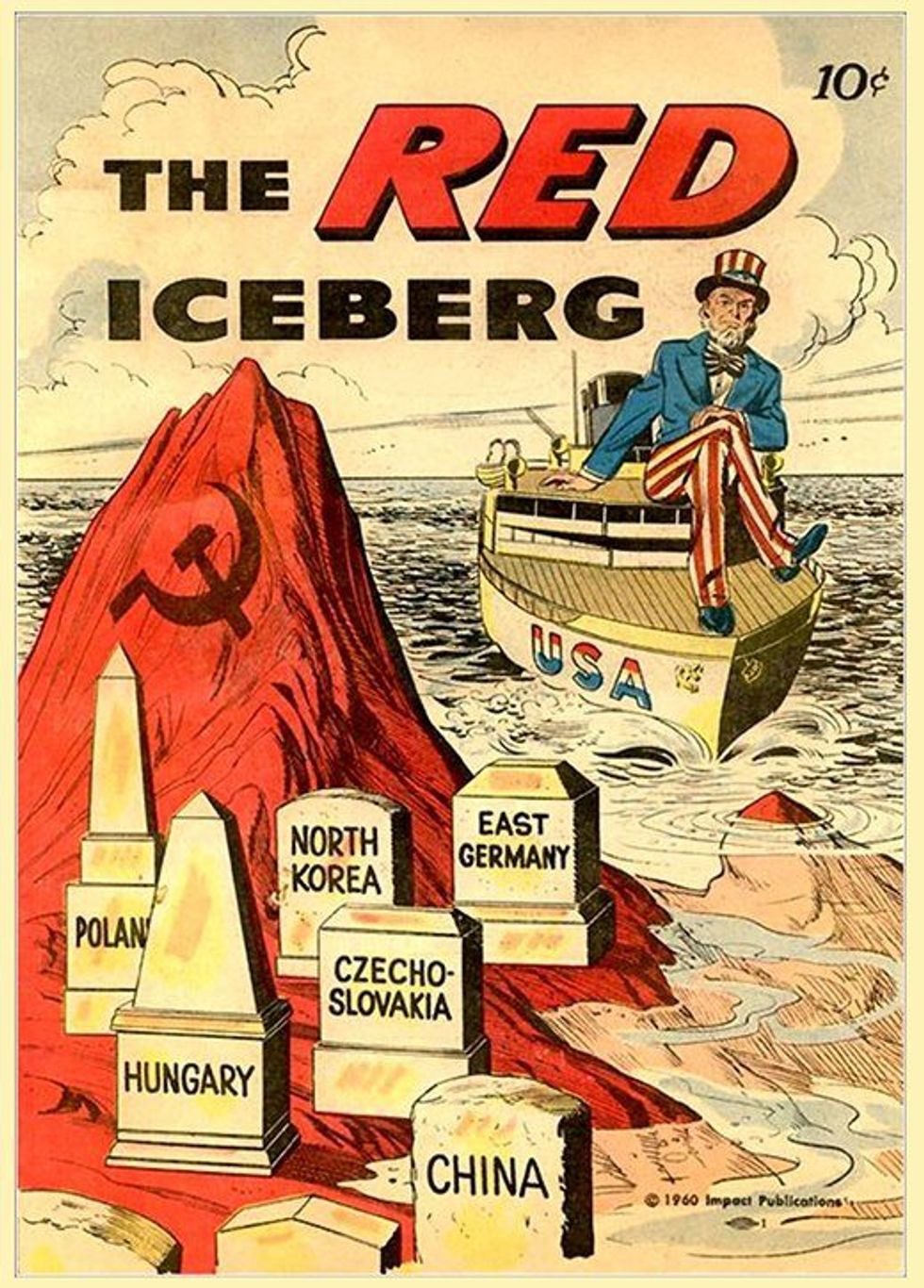 Wonkette EXCLUSIVE must cite Wonkette!!! The Wingnuttosphere is full of excited stories about an absolute OUTRAGE that occurred last week, when the flag of COMMUNIST RED CHINA, our sworn enemy and trading partner, was flown in front of the Washington state capitol building in Olympia to honor a visit by Chinese Ambassador Cui Tiankai. After much huffing and puffing, the offensive banner was hauled down Saturday morning either by brave, Constitution-Loving Patriots, or by a maintenance worker who was removing it because the ambassadorial visit was over. Actually, Yr Wonkette has confirmed with the office of Gov. Jay Inslee that the flag was taken down as a matter of routine -- not due to pressure from wingnuts.

The OUTRAGE appears to have originated with this overheated tripe from a Facebook site by "Anthony Bosworth the Patriot" on Friday, which then made its way to Alex Jones, Gateway Pundit's snotty little brother Progressives Today, (which credits a tip from Washington state Rep. Elizabeth Scott), and a host of other rightwing sites including conspiracy theory clearinghouses The Examiner and WND. It's also currently the featured story at Gateway Pundit, where Jim Hoft is making quite a bid to win back his crown as Stupidest Man On the Internet.

"Anthony Bosworth The Patriot" had himself a nice little snit about the horror of a COMMUNIST FLAG flying between Old Glory and the Washington state flag, which was CLEAR evidence that Gov. Jay Inslee is himself a ComSymp and a traitor. We're particularly taken by Bosworth's amalgam of language from an anodyne press release and his very own pure rightwing poutrage:

We now know where the loyalties of our liberal, communist loving Governor are. The people of Washington State has asked the governor to address our list of grievances and yet we have heard nothing from him.

But yet he takes time and Washington taxpayers money to show honor to one of the United States of America's enemies a communist ambassador and he is honored to do so.

The Governor will be discussing a range of issues related to trade, foreign direct investment and ongoing educational and cultural exchanges.

Washington currently exports more goods and services to China than any other state and it is our largest trading partner.

The governor has made his position clear he wants to oppress the Washington people and destroy their liberty. Yet show honor to one of America's enemy.

Wake up Washingtonians your liberties are at risk as long as this traitor is in office.

Of course, "[sic]" should be understood throughout the quote. Just look at this INCREDIBLE INSULT TO AMERICA!!!!

Then finally, on Saturday, VICTORY, as documented in this exciting video of three or four "activists" gathering to yank down the shameful banner of oppression! It's a great moment for America, described breathlessly by conspiracy-spewing website The Examiner under the headline "Video: Patriots remove Communist flag from Washington state capitol":

On Saturday, a small group of activists carrying yellow Gadsden flags now associated with the Tea Party, assisted by a trooper from the Washington State Police, removed the flag of Communist China from the state capitol building in Olympia, Washington [...]

"That's an officer I can support," one person said of the trooper providing assistance. The officer remained unidentified in the video, but one activist said he was an Oath Keeper.

We suppose it might be rude of us to point this out, but didja notice that not a single one of the "patriot activists" does any actual hauling down of the commie flag? The guy taking down the flag is a state employee, what with the hardhat and the tools to open up the flagpole and crank down the flag. And the poor state trooper who is now going to get called a member of a quasi-paramilitary group is just the poor schlub who drew the honor of guarding the maintenance guy, not an anti-government activist who's joining the "patriots" in defiance of Communist Gov. Jay Inslee. But yes, some guy in the video does exclaim, "Now that's a oath keeper there, making sure the communist flag comes down!" So the officer's membership in the organization is definitively proven, right?

Again, as we confirmed with a call to Jaime Smith, Director of Media Relations for Gov. Inslee, the Chinese flag had been flying to honor the ambassador's visit. She noted that it's common protocol for national flags of visiting diplomatic and trade delegations to fly at the Capitol during official visits, as a routine show of goodwill. When the visit is over, the flag comes down. Totally normal, and the "patriots" had nothing to do with it. And for the record, neither the maintenance worker nor the state trooper were engaged in a protest, even though the protesters did manage to stand in frame with them as they did their jobs.

In other words, WND's headline described it exactly right:

PATRIOTS TEAR DOWN COMMUNIST FLAG AT STATE CAPITOL
Ms. Smith noted during our call that she'd just received an email noting that the flag of Scotland will be going up at the Capitol today to honor another visiting diplomat. We're earnestly awaiting the Wingosphere to freak out over Gov. Inslee's traitorous sympathies toward those haggis-eating caber-tossers and their nefarious schemes to replace Old Glory's stripes with tartan. WAKE UP, AMERICA! If it's nae American, it's crap!

Unless the "patriots" only notice and take credit for removing dirty Commie flags, in which case the Scottish flag should be safe.