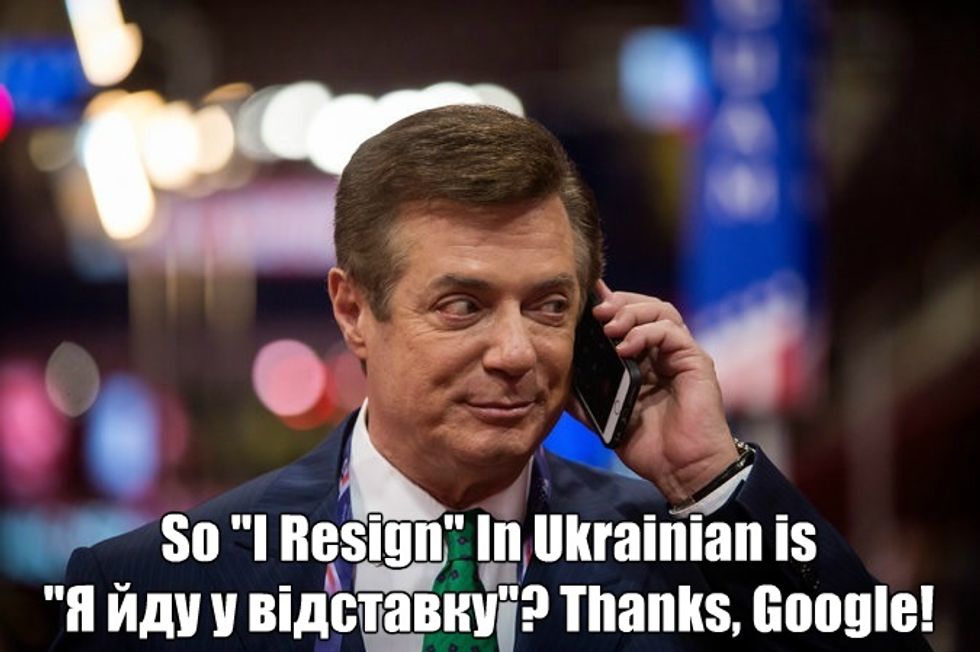 Bang the drum slowly and play the fife lowly, for Paul Manafort's job with the Donald Trump campaign has gone to that Great High-Dollar Consultancy In The Sky. Manafort resigned Friday morning just days after Trump brought in a new campaign staff that shared his affinity for conspiracy theories, the "alt-right," and psychotic screaming. It also didn't help Manafort a hell of a lot that documents have recently surfaced linking him to alleged huge cash payouts from former Ukrainian president Viktor Yanukovych, plus even more recent evidence that Manafort had funneled money to lobbyists in the USA on behalf of Yanukovych's party without registering as an agent of a foreign government, a potential felony for which he could go to the federal pokey. How about that timing! And look, here is Mr. Trump's huge, classy acceptance of Manafort's resignation:

Manafort was supposed to help Trump run him a professional campaign, but it turns out that Donald Trump didn't really want to run a professional campaign; he wanted to go to rallies and have fun and yell at people. Heck, maybe now that Manafort is out, the campaign will bring back Corey Lewandowski, get the band back together, and go on a road trip.

There are conflicting reports as to whether whether Rick Gates, Manafort's "deputy" -- what the hell is a "deputy" for a campaign guy, anyway? It's like a "Smithers," isn't it? -- will stay with the campaign. The New York Times says he's staying on, NBC News and the Guardian's Ben Jacobs say they hear he's out, and we've never heard of him before, but wouldn't be surprised if he ends up getting the boot as well, seeing as how he helped Manafort with that possibly illegal lobbying on behalf of Ukraine. Sorry, guys, Trump only wants 100% made-in-the-USA fascist buddies right now, OK?

Brand-new Trump campaign manager Kellyanne Conway, who came aboard the Trump Trainwreck with former Breitbart head Steve Bannon, had recently described herself, Bannon, Manafort, and Gates as the new "core four" in the Trump campaign. She's going to have to find some new rhymes depending on whether Gates stays. The "twee three"? Or considering Trump's polls, the "blue two"? WHO? WHO?

Manafort has not yet said what's next for him, but we're betting he's on to more adventure and professional achievement, most likely somewhere that doesn't have an extradition treaty with the USA.