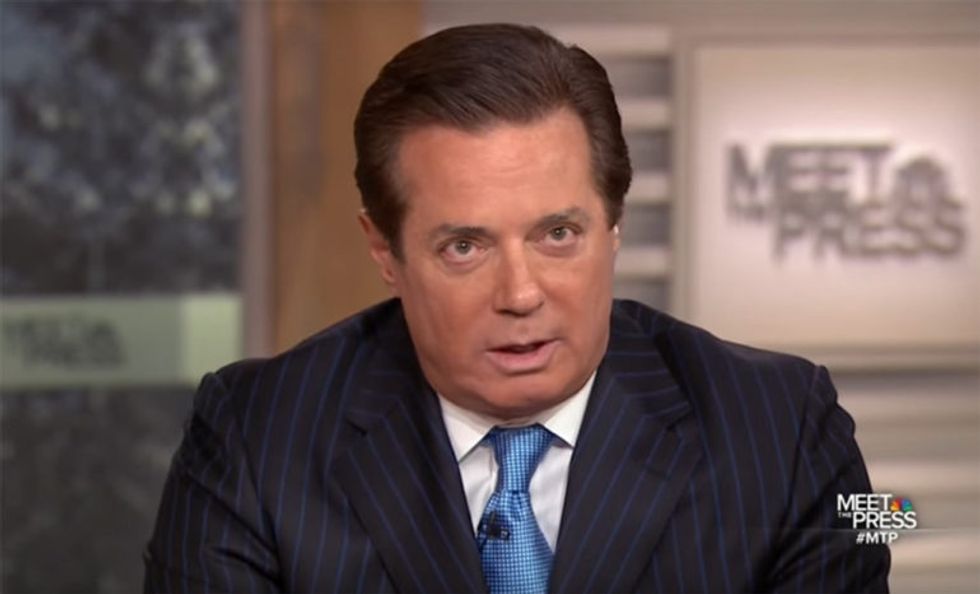 POP QUIZ: How many days has it been since a federal judge told Paul Manafort to eat three dicks and call her in the morning? TIME'S UP! If you guessed "It was Friday, right?" you win the magical prize, which is shut up, Wonkette does not award prizes. In that case, the judge, Amy Berman Jackson, did not buy arguments from Manafort's lawyers (who must be getting OMG SO RICH off this case) that special counsel Robert Mueller had exceeded his mandate, by investigating things he is clearly allowed to investigate, and executing warrants he is clearly allowed to execute, according to the instructions Deputy Attorney General Rod Rosenstein wrote when he appointed Mueller. Tough break, World's Best Lawyers! Better luck with your "legal strategy" next time!

And hilariously, "next time" is right the fuck now, because the Manafort team filed a new thingie (legal term) in the Eastern District of Virginia on Monday night, arguing, in essence, that the Mueller investigation is invalid because there have been mean articles about Manafort in the newspaper, articles that could only have come from DEEP STATE!!!!11!!!1!!GHAZI1!!!!! Therefore, the Mueller probe is tainted and Mueller is very stinky and Manafort is above the law, and ...

No for real. Stop laughing. This is a serious filing in a serious federal court.

The court document [...] zeroed in on news stories detailing investigations into Manafort’s communications with Russian intel operatives. Manafort said the government has not turned over any evidence in its discovery process of such communications, leading Manafort to suggest that the leaks were an “elaborate hoax” to sway the grand jury.

Because journalists did their jobs and investigated issues surrounding how Paul Manafort is a LITERAL ACTUAL FOREIGN AGENT who was probably sent in as a Russian asset to infiltrate the Trump campaign, which led to articles in the newspaper Manafort doesn't like, this means the Deep State was doing an "elaborate hoax," ergo INVESTIGATION OVER? This is their argument?

And since a lot of this stuff happened before a special counsel was appointed, then it isn't fair that Mueller took over the Manafort investigation from the FBI, because duh, it was just a Deep State hoax to say CLASSIFIED FAKE NEWS, in order to fool DOJ into appointing a special counsel to investigate Manafort.

The filing cites numerous news articles, all of which paint Manafort in a bad light, and some of which use anonymous current and former government officials as sources. Many of the others just cite "unnamed sources" who could very well just be Manafort associates whispering in journalists' ears about what a dumbass criminal their buddy is. Regardless, Manafort's point is that there should be an investigation into the leakers who leaked the leaks about the Paul Manafort crimes, but no investigations into the "Paul Manafort" who committed the crimes, allegedly, because something something "Paul Manafort's Constitutional rights," blah blah blah, and so on and so forth.

Lest you think we are making light of this very serious court filing, a couple screenshots:

We're sure Judge T.S. Ellis III of the EDVA will find something in there that will convince him to rule in Manafort's favor and murder the Mueller investigation in its crib, you betcha, mmhmm, YUP.

Who knew the Deep State had a West Coast outpost!