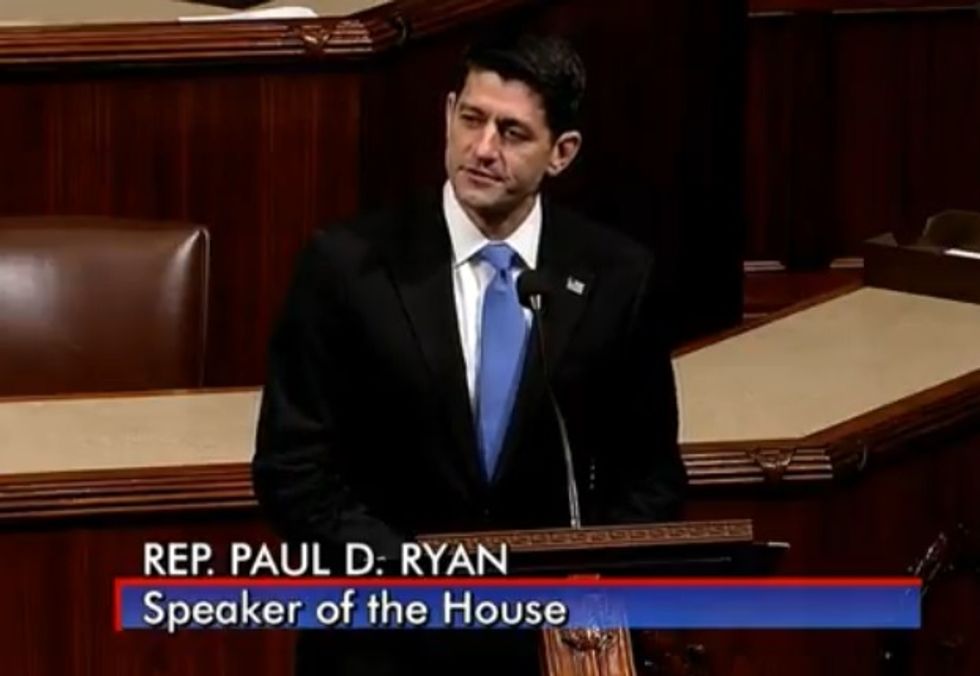 Paul Ryan took to the floor of the House today and gave a rousing speech in support of the big Republican Tax Cuts For Rich Fuckwads bill that passed shortly afterward. It was a bold souffle of trickle-down cant and outright lies, and you could practically hear old rich guys creaming their pants at every line of the thing. It was a truly sickmaking spectacle, and Ryan was peculiarly excited as he talked about the great days ahead of us, because "today -- today we are giving the people of this country their money back." We won't venture a guess at whether Ryan actually believes the bullshit coming out of his facehole about helping "hardworking Americans who have been left behind for too long," or if he knows he's lying and is delighted at the idea that the proles will buy it. Really, does it even matter? Let's just look at a few of Ryan's lies and not-quite-truths:

"The bottom line here is that a typical family making the median family income will get a $2,059 tax cut next year." True for 2018, if you're a family of four making $73,000 annually -- which is technically $14,000 higher than the "median family income." But because the bill makes corporate tax cuts permanent, the rate reductions for individuals will phase out over time, disappearing altogether in seven years, and by 2025 that family will be paying what they're paying now. And by 2027, 53 percent of families will actually see a tax increase to pay for the parties that millionaires and corporations will keep throwing. Be proud of your contribution to their confetti fund, America!

Much of the speech -- which should make for some good quote-mining for the 2018 midterms -- made it sound like these tax cuts are aimed at ordinary folks who have been suffering from a slow economy -- you know, the economy that's been growing every year since the middle of Obama's first term. Ryan said a lot about opportunity and hard work; in reality, 83 percent of the benefits of this tax cut will go to the top one percent of Americans. We're almost certain they aren't doing 83 percent of the work -- someone should look into that. Oh, but look at the soaring lines about the American Dream here!

The mission that drives us today is to restore the American Idea. It is the belief that the condition of your birth does not determine the outcome of your life. It is that sense of possibility.

And that's why the already rich need more money. So that you can work hard and maybe join them, especially if you marry one of them or contrive to inherit their wealth with no estate tax. Oh, but this isn't a scam -- even though it's the most unpopular tax bill in modern history, Paul Ryan assures us that those snotty elitist liberals taking all your freedom are the real scammers:

In one of the few unintentionally honest lines in the speech, Ryan said, "Yet for years now, the tax code has been skewed to the well-connected, full of special carveouts and loopholes." Mostly like the "Corker Kickback," that brand-new deduction for real-estate LLCs that will mean an extra millions in tax savings (on top of their tax rate decreases and alternative minimum tax abolishment and murder of the estate tax) for 14 of the GOP senators who'll be voting on the tax cut bill soon. And even bigger tax savings for Donald Trump.

We're pretty sure Ryan meant welfare recipients are getting all the goodies. That has to be it. But let's look at the Corker Kickback in the wider perspective:

[We] are restoring the freedom to make your health care choices. By repealing the individual mandate at the heart of Obamacare, we are giving back the freedom and flexibility to buy the health care that’s right for your family.

For instance, some 13 million Americans in the next 10 years will "choose" to have no insurance at all, and will therefore choose to never get sick or be in accidents. Millions more will choose to have ever-higher premiums as the individual market covers mostly sicker, older people. And the government will actually spend more money on premium subsidies to offset those increasing premiums. Isn't that beautiful for freedom? At the moment, we're particularly worried about the Affordable Care Act regulations that mandate that insurance companies can't cap your sick child's benefits, or that cap your out-of-pocket expenses. Then we can all be "free" to get kicked off the insurance we've duly purchases, just like the good old days! MAGA!

Ryan was also super-excited that, after decades of trying, Republicans finally managed to jam through a provision opening up the Alaska National Wildlife Refuge to oil and gas drilling, because Crom knows that permafrost isn't melting fast enough. Hooray!

Ryan wrapped up with an appeal that, again, is probably true -- just not in the way he meant it:

We talk a lot in these jobs about turning points. There is no doubt that we are at one now, one that will determine the kind of country we have through this century.