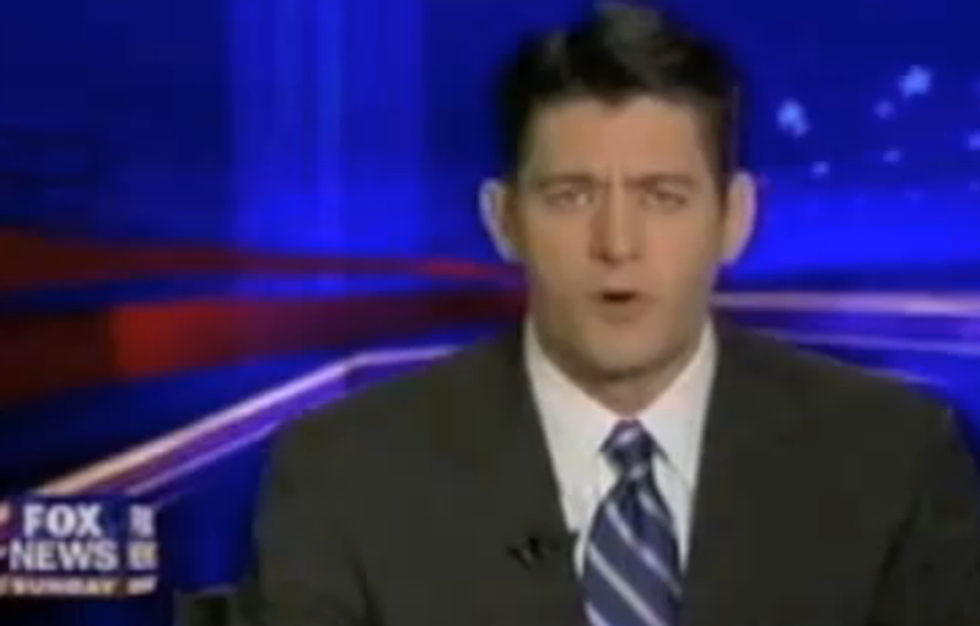 What has Congress been up to these days? We didn't fire them, right? Yes, it would appear they still have jobs, and that job is continually "avoiding shutdown" because voters dividing power between the two very polarized parties these days is akin to snapping the government's neck and putting it on life support. Sure, the making war with new countries and denying the rights of wrongly jailed minorities parts still work, but that's about it. Meanwhile, Rep. Paul Ryan has been off in a corner thinking about the deficit and has decided the best way to save the government some money:cripple its successful Medicare and Medicaid programs and then throw in some more tax cuts for the very richest of Americans, because why not?

The plan for Medicare is to keep it as is for people currently on it or those who will get it in the next ten years, so the old people won't complain and the Baby Boomers won't whine about not getting their way for once and vote the Republicans back out of power. For people who are not as old as these groups, Medicare would be replaced with a voucher to get a crappy private insurance plan that will try to battle them every time they're sick and actually need medical care. This is actually very similar to the Obama health reform that Republicans profess to hate so much, but is apparently more viable than just saying immediately that they want to get rid of Medicare forever.

Medicaid would be reduced to lump sums given to states that would probably force states to completely gut that program too.

None of this will ever pass, of course, because when people have actual ideas in that legislative body these days, it's just performance art. But it's fun to see that Republicans have done such a good job of blocking making everything easier and efficient and work better by socializing the rest of our health care in this country that they can now propose eliminating social medicine altogether.

Oh, are you worried the private health care system that only exists in this lone Western nation is a ravenous beast with spiraling costs and poor coverage that will destroy us all? That's nice. Not the GOP's problem.

The fun part of this proposal is that it will actually raise taxes on all Americans but the top 5% of earners, for whom it will, of course, cut taxes, because when's the last time those ailing rich people were given a tax cut? Five seconds ago? Give them another! [TPM/Yglesias]