Paul Ryan: Sure Would Be A Shame If Some Election Stopped Our Cover-Ups For Trump 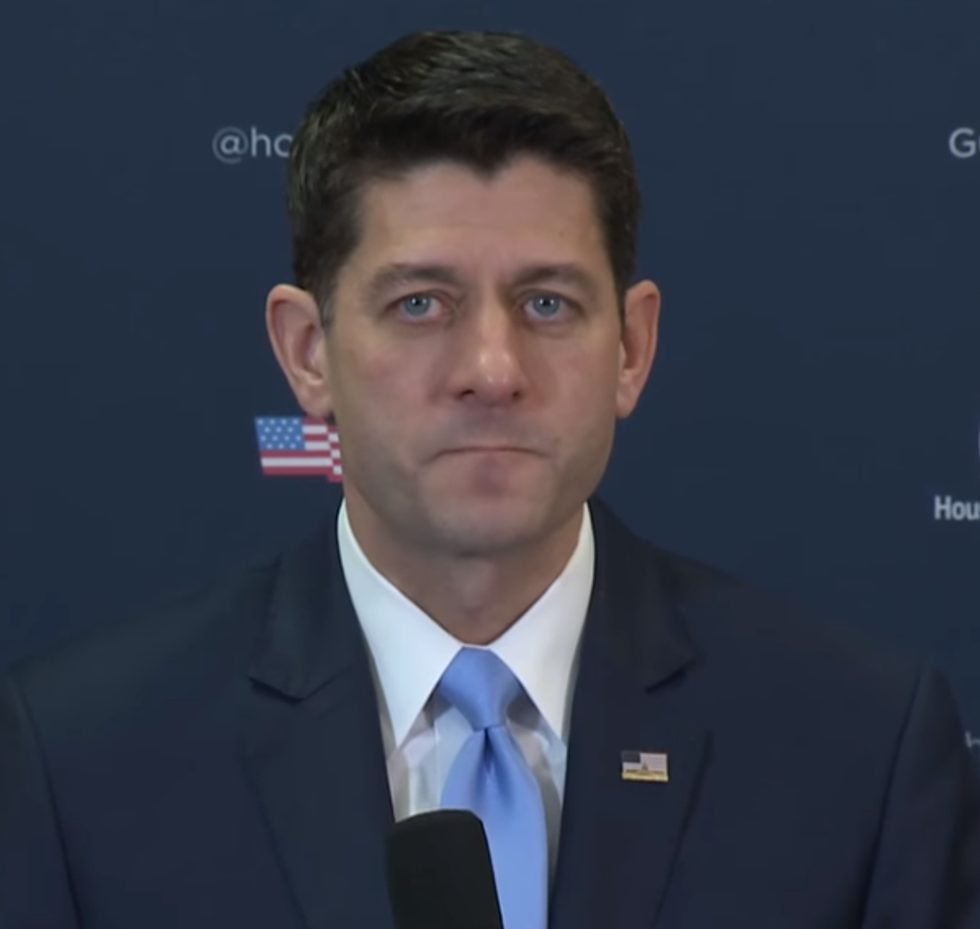 We think the stress of having a majority in the White House and Congress may be getting to Republicans. They don't have Barack Obama to yell at anymore -- not that they don't still try -- but even with their majority, they can't seem to get anything done, and it's resulting in a strange wave, or at least some ripples, of truth-telling. T'other day, Marco Rubio let slip that the Big Fat Tax Cuts For Rich Fuckwads hadn't resulted in huge benefits for the average worker, and former HHS secretary acknowledged that killing Obamacare's individual mandate would drive up premiums on the ACA exchanges. (Yes, both later insisted they'd been taken out of context. Fuck them -- they accidentally let slip the awful truth. Price didn't even try to claim he'd never said premiums would go up; he just said it was a natural result of FREEDOM.)

Now we can add to this trendlet Paul Ryan, who argued at a financial conference in California this week that it would be a terrible shame if Democrats took back the House this fall, because just look at what might happen: “you’ll have gridlock, you’ll have subpoenas,” and all the beautiful Republican progress on sending every last vestige of the Obama years down the memory hole will grind to a stop.

As New York magazine's Jonathan Chait points out, that's one hell of a thing to admit. Sure, Ryan meant the mean old Democrats would start a whole bunch of pointless investigations of the Trump administration, like oh, say, Benghazi. But what Ryan was really saying was that the Republicans' beautiful record of running interference for Donald Trump would be tackled to the ground by large men and then the president would be sacked (this has been your sportsball metaphor for the week):

Ryan’s House has been run essentially as a subordinate arm of the Trump administration. Ryan and his party have quashed votes to compel release of Donald Trump’s tax returns, and they have used their investigative power not to oversee the presidency but to harass and intimidate the Department of Justice into falling into line behind the president’s whims, to the point where the acting attorney general had to bluntly accuse House Republicans of trying to “extort” him. Trump and his family have used their power to enrich themselves personally, with no hearings or oversight whatsoever from the House. His Cabinet members have likewise misspent funds and abused their authority without any accountability from the committees that are putatively tasked with the job.

Mighty Crom on his great mountain, what a terrible thing it would be if the House Intelligence Committee, chaired by Adam Schiff, did a real investigation of Trump/Russia, and issued subpoenas to compel the testimony of all those witnesses who blew off the House the first time around. Those troublesome Democrats might even call Don Jr. back and tell him, no, having a chat with your dad while a lawyer was in the room doesn't mean the conversation is protected by "attorney-client privilege." For that matter, they could subpoena phone records to find out who Junior called in between his two chats with Emin Agalarov in preparation for the Trump Tower meeting. We wouldn't have to guess who that might have been -- we'd actually know (it was Jenny, at 867-5309).

And wouldn't it be a hoot if the various House committees charged with overseeing agencies did some real oversight? We're not just talking about the reckless spending by Scott Pruitt or Ryan Zinke, though of course those are worth digging into. But Congress could actually insist that Pruitt (will he still be around in 2019? Only if he keeps Big Oil happy) explain why he thinks the EPA needs to be approving pesticides the EPA's own scientists said were dangerous to those who handle them -- and people the chemicals drift onto. Heck, maybe, at the risk of being really bold, Congress could insist that the EPA take its first two letters seriously again.

We're certain Ryan is already hard at work on an explanation of how his comments were taken completely out of context -- he never meant to imply oversight is a bad thing. He's all in favor of subpoenas, really -- how else are we to ever get to the bottom of how Hillary Clinton sold uranium to the Russians through her private email server at Benghazi, after all?

Don’t take for granted that the institutions you love will always be there, like separation of powers, and Wonkette. Click to save at least one of them!