Paul Ryan: Vote For The Racist! 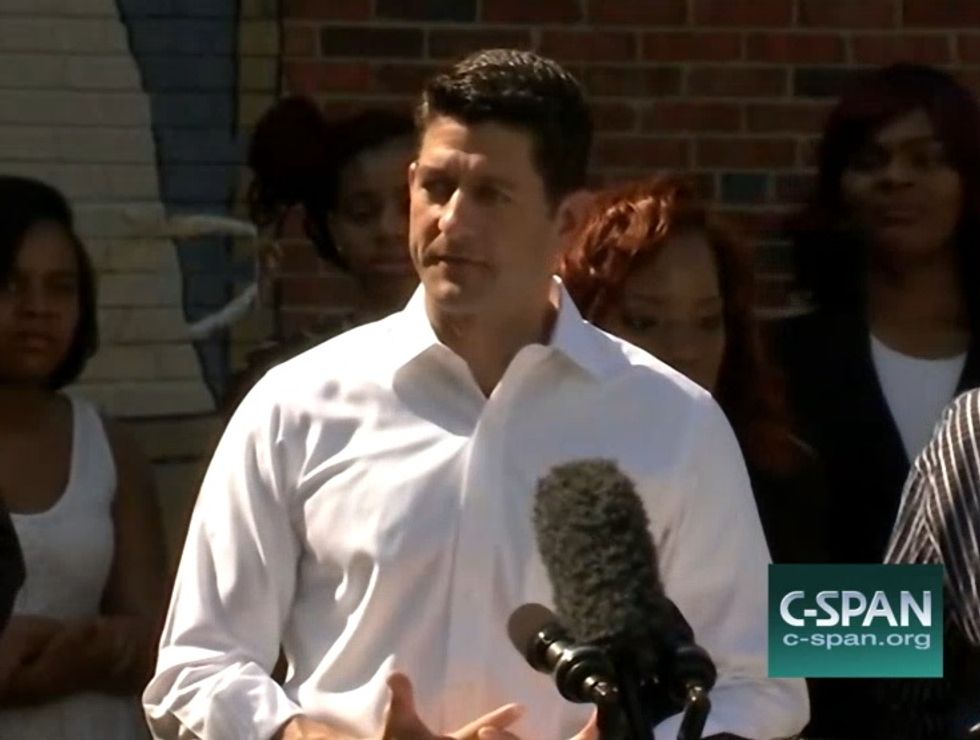 The textbook definition of political courage. Or the complete opposite of that, whatevs.

House Speaker Paul Ryan Tuesday issued a strong condemnation of Donald Trump's racist remarks about a federal judge, then immediately said that of course he still plans to vote for the guy making racist remarks because he isn't Hillary Clinton, duh. Speaking at an event designed to unveil the GOP's terrific plans for fighting poverty (let's just assume it involves tax cuts for the rich), Ryan had nothing good to say about Trump's "indefensible" remarks on Judge Gonzalo Curiel, who's presiding over one of the (many) fraud lawsuits against Trump's scammy "University."

Claiming a person can't do their job because of their race is sort of like the textbook definition of a racist comment. I think that should be absolutely disavowed. It's absolutely unacceptable, but do I believe that Hillary Clinton is the answer? No, I do not. Do I believe that Hillary Clinton is going to be the answer to solving these problems? I do not.

You see, Ryan explained, it's all about the things Republicans have in common, like fiscal conservatism and free trade policy (which Trump hates), and not about the horrible racist things Trump says (which are what his supporters love so much).

I believe that we have more common ground on the policy issues of the day, and we have more likelihood of getting our policies enacted with him than we do with her, but I do absolutely disavow his comments. I think they're wrong, I don't think they're right-headed, and the thinking behind it is something I don't even personally relate to, but at the end of the day this is about ideas. This is about moving our agenda forward and that's why we're moving the way we're moving.

It's about ideas, man. Not the racist ideas that Trump happens to spend all his time on, but the conservative principles that Paul Ryan likes to pretend will blossom into wonderful policies under President Trump, at least when he's not busy saying racist shit all the time. Ryan added,

He also had a suggestion for what might be a better way of handling the internecine fuck-tussle over the comments than continuing to insist that no "Mexican" judge could ever be fair to Trump: "If you say something that's wrong, I think the mature and responsible thing is to acknowledge it."

Hahaha, Ryan said "mature and responsible" in reference to Donald Trump. What a joker!

Lord: Let me make no bones about it: Speaker Ryan is wrong and Speaker Ryan has apparently switched positions and is now supporting identity politics, which is racist. I am astonished. I like Paul Ryan a lot --

Costello: Do you know how ironic that is that you’re calling all of those particular Republicans racist?

Lord: I am saying it is identity politics, which is racist, and they should reject it out of hand.

That's some race card, you racists. So, to sum up: Racist Paul Ryan called racist Donald Trump's racist comments racist, but the campaign is about ideas, so vote for the racist instead of Hillary Clinton. And Paul Ryan is a racist for calling Trump's comments racist, because people who believe in fairness know that a Mexican judge cannot be fair to Donald Trump. We must reject identity politics and people who aren't white, as well as the racists who defend Mexican judges.

We appreciate the chance to clear that up for you.