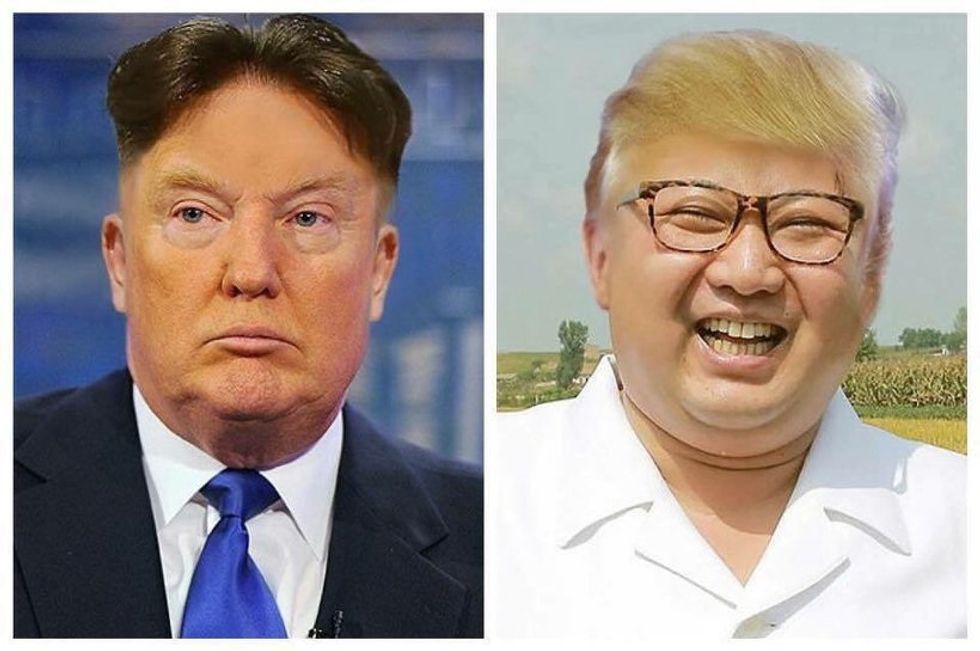 Donald Trump has agreed to meet with North Korean leader Kim Jong Un, and Crom only knows if it will be more Nixon Goes to China or Ernest Goes to Camp. The invitation was made by Kim Monday when he met with South Korea's national security adviser Chung Eui-yong in Pyongyang, and Chung passed on the invite yesterday at the White House. No sitting American president has ever met with a leader of North Korea face to face, usually leaving the diplomacy stuff to diplomats. It's a big risk, but if it results in North Korea really giving up its nuclear weapons program (unlikely) or even a significant reduction in tensions between the US and North Korea (possible?), Yr Wonkette is happy to give credit where it's due: Thank you, South Korea.

Trump agreed to the meeting without any of the kinds of preconditions that have usually preceded meetings between US and North Korean officials, although Kim reportedly said that in the run-up to the meeting, to take place sometime before the end of May, North Korea will not test any nuclear weapons or ballistic missiles. The Washington Post quoted a "senior White House official" as saying Kim's message included a "commitment to denuclearization," which is nice, although it should be noted that over the years, North Korea has committed to giving up its nuclear program about as often as some people give up smoking.

To celebrate the achievement, Donald Trump blessed the event with a tweet, which makes it official forever until he tweets something else.

The replies from Trumpers insisting this proves Trump is the "smartest president ever" or insisting "only Trump could have done this" rather miss the point that the whole thing so far has been arranged by the South Korean government in the feel-good period following the Winter Olympics, helped along by president Moon Jae-in's determination to talk to the North. Here's hoping Mike Pence can be persuaded to at least stand up when Kim comes into the meeting room.

In remarks in front of the White House last night, Chung made sure to give credit to Donald Trump for the achievement, continuing what appears to be a deliberate South Korean strategy of trying to flatter Trump into not saying anything stupid that will set off a war.

“I explained to President Trump that his leadership and his maximum-pressure policy, together with international solidarity, brought us to this juncture,” Chung said.

"Also, have you ever noticed what large, strong hands Mr. Trump has? Truly, he is the man to bring peace," Chung might as well have added. It's not clear whether Chung took the opportunity to suggest his country would sure appreciate not being hit with steel tariffs, seeing as how he just delivered Trump the best foreign policy news of his presidency. We bet that comes up at some point.

That unnamed senior White House official also emphasized the ever important Tough Talk, just so Kim doesn't think Trump's instant agreement to the meeting has given North Korea any kind of international legitimacy:

President Trump has been very clear from the beginning, he is not prepared to reward North Korea in exchange for talks [...] But he is willing to accept the invitation at this time to meet . . . and he expects North Korea to start putting action to the words they conveyed.

Thank goodness the official was able to get this important sales point in there, too: asked why Trump didn't first insist on preliminary talks between lower-level officials before a full-on meeting between the heads of state, the official explained that sort of contact has gone on for decades, and “that history speaks for itself":

Why yes, Donald Trump's fantastic negotiation skills. Get ready for Trump to tell Kim all sorts of cool top secret stuff then, to prove how important he is. Israel may want to start bringing home its spies in advance.

Now it's time for lots and lots of expert talkers to debate whether this marks a victory for Donald Trump's schoolyard taunting style of international relations or whether this is actually a great big feather in Kim's ill-fitting cap, since now he has a big pile of nukes and missiles, and just look how quickly that convinced Donald Trump to sit down with him face to face. We can hardly wait to see what kind of propaganda posters result from this.

Probably the biggest surprise was North Korea's statement that it would not make a fuss about annual joint military exercises between the US and South Korea next month, which it traditionally reacts to by calling the exercises a declaration of war that will be met by turning both America and the south into a sea of fire. This year, it's cool with them.

Yr Wonkette isn't really expecting anything too substantial to result from the meeting, apart from Kim and Trump each being convinced they've outfoxed the other. If by some miracle an actual agreement comes out of it, and this is the one good thing to come out of Donald Trump's presidency, we will of course be ready to say "a good thing happened while Trump was dismantling everything else in America." Or maybe Trump will actually pull Kim's arm off when they shake hands and call North Korea a shithole country to his face. That could happen, too.