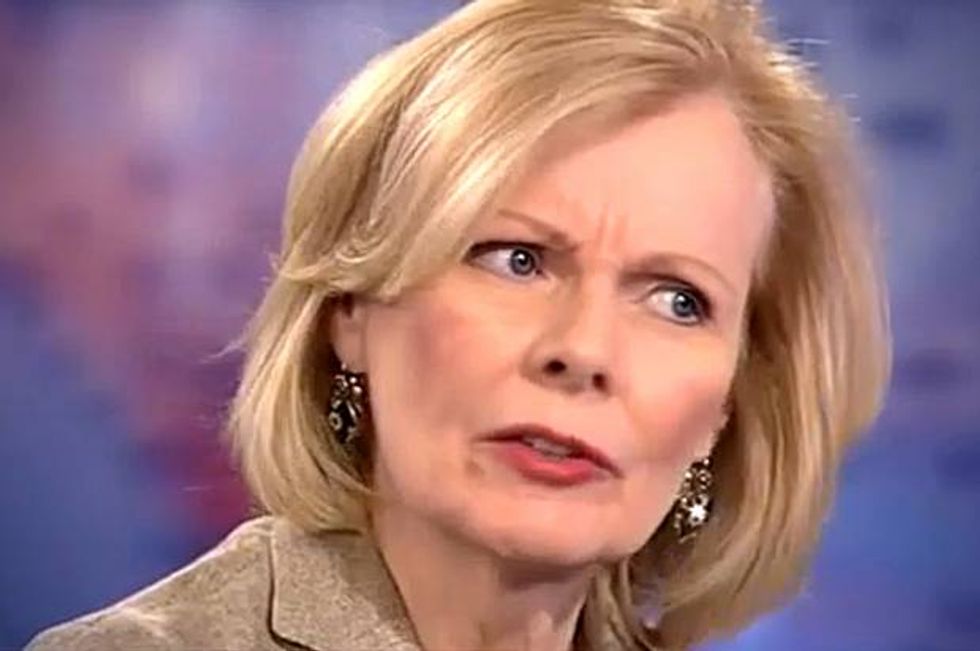 She would not cower in fear of the Muslim menace. She would not hide out in her aerie high above Manhattan with only her houseboy Manuel and a crate of Dewar’s for company. No sir, not Sister Peggy Noonan of Our Lady of the Xanax Brain Cloud! The dirty savages might have attacked a newspaper office and cut down beloved members of France’s press, but they could not kill the spirit of free nations! Turn it into a raft of terrified, paranoid, jingoistic chest-beating sociopaths bent on revenge, maybe. But never kill it!

So she headed for her office at the Wall Street Journal, Manuel and crate of Dewar’s in tow, to show the Muslims she was fearless. “I’m not afraid of you!” she screamed at the turban-clad terrorist manning the newsstand on 3rd and 68th.

“Meesus Peggy, that is Adar from Mumbai. He is Hindu,” the patient but slightly strained voice of the Dewar’s-laden Manuel said from behind her.

“I’m not afraid of you!” she shouted at the brown-skinned menace shoveling snow away from the front door of the bodega at 65th.

“That is a Mexican,” Manuel explained. “You have seen many of them before.”

“I’m not afraid of you!” she hollered into the dark face that had been trailing her since she left home.

This was confusing. She hoped the office was close. She had thoughts to order.

Maybe it would be instructive to look at how we in the West handle what is rude and unpleasant and offensive.

The problem is that the savages do not understand how civilized people do things in the West. She would explain it to them, as if she were an intrepid explorer from a Rudyard Kipling story.

In the late 1980s, Andres Serrano produced “Piss Christ,” a photograph of a small crucifix submerged in the artist’s urine. That didn’t go over well with a lot of Christians. They wrote op-eds, protested peacefully, and criticized the National Endowment for the Arts for subsidizing the work with tax money. The arguments were vigorous. But the protests were peaceful, and no one even dreamed of harming the artist.

Had Andres Serrano or any of the gallery officials who showed his work received death threats? Who knew! Those had been crazy times. If only there was some way she could quickly look up that information to see how even how her fellow Catholics in France reacted to “Piss Christ.” Ah well, she was sure the same fact-checker who worked on all her columns would catch that one if she was mistaken.

Or maybe the artists were just talentless hacks producing the only thing they were good at: publicity.

This was her column, not Twitter, but she saw no reason why she could not use that famous literary device known as a “subtweet.” She was sure a certain snarky political blog would get the message.

A singular feature of extremist Islamists is that they are not at all interested in persuasion. They don’t care about winning you over, only about making you submit. They want to menace and threaten. They want to frighten. They enjoy posing with the severed head.

Americans never do that sort of thing. And if they do, it is just fraternity hijinks. The West cannot be blamed if a young man sees pictures from, say, Abu Ghraib during the Iraq War and becomes a radicalized jihadi who goes on to kill 12 people in a newspaper office in Paris years later. That is just crazy talk.

It is the West’s job not to be overcome by fear, not to give an inch.

Steady is the word.

Yep, steady as an old newspaper columnist who hadn’t gulped down any Dewar’s for at least 10 minutes.  That’s how the West reacts to attacks by radical Islamic fundamentalists.

Peggy smiled, puffed up by words she could easily imagine Churchill reciting to Parliament even as Luftwaffe bombs rained down all around them and the populace of London cowered in the tubes below. If only she had been his speechwriter! The war would have been over before Dunkirk.

This was turning out to be her greatest column yet.