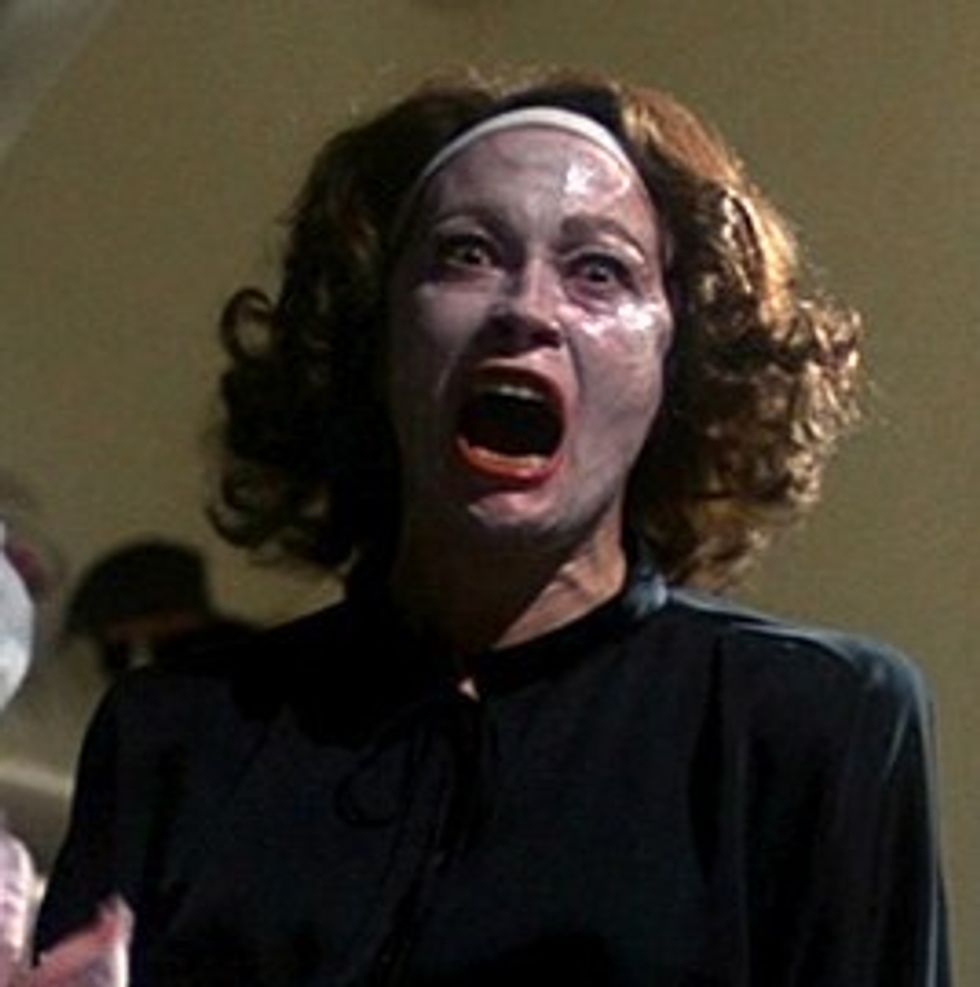 Peggy Noonan lounged in her sitting-room high above the island of Manhattan, morning highball glass parked at her elbow, as she pondered the government shutdown taking place far below her well-appointed aerie. How would it affect her? Would she be able to ride the Acela down to Washington this weekend to blather on the Sunday show with the tiny Greek man, as usual? Most importantly, what solution could she, Sister Margaret Ellen Noonan of the Order of Our Lady of the Laudanum Latte, offer to break through this impasse, on the chance that the uppity colored man currently occupying Ronald Reagan’s old house would listen to her?

Dimly, as if they had been cawed from a great distance by a flock of sparrows circling over a meadow, two terms broke through the fog enveloping Peggy’s mind. The first was Obamacare. The second was concern-trolling. The good Sister picked up her quill, dipped it into the jar of amniotic fluid she kept on her desk, and began to scratch her column across the crackling parchment in front of her.

Here is why the rollout is so damaging to ObamaCare: because everyone in America knows we spent four years arguing about the law, that it sucked all the oxygen from the room, that it commanded all focus, that it blocked out other opportunities and initiatives, and that it caused so many searing arguments—mandatory contraceptive and abortifacient coverage for religious organizations that oppose those things, fears about the sharing of private medical information, fears of rising costs and lost coverage.

Once again we must point out that birth control pills are often prescribed for medical reasons that have nothing to do with preventing the conception of precious snowflake Jesus babies. And being a multicultural secular society means that a Catholic-run organization does not get to impose its religious beliefs on any of its Jewish or Baptist or Scientologist employees. Even if said organization and the good Sister Margaret disapprove of babby-murdering.

Also, that part about covering abortfacients? It has been making the rounds among conservatives. It is a lie. A big fat fucking lie, you poop-headed twit. Try learning the difference between Plan B and RU-486 before you write that again.

After the administration floated the fiction that the problems were due to heavy usage, the Journal tracked down insurance and technology experts who said the real problems were inadequate coding and flaws in the architecture of the system.

Of course it did. Perhaps you could link to some of those stories? No? Meantime, the Washington Post has a column by someone who actually covers technology issues that says heavy traffic the first few days did in fact overwhelm the main Obamacare website and the administration is now purchasing additional servers that should alleviate the problem. The Post story also points out that 36 states declined to build their own exchanges and instead participated in the federal one. This forced the system’s architects to account for enormous amounts of data that it had to pull from state databases that themselves might have been poorly designed and not functioning properly, so even with over three years to prepare the whole thing was always going to be a huge mountain to climb.

The states that did not build their own exchanges often did so out of pique because they are red states and FREEDOM SOCIALISM OBAMA SUCKS GLARGLE GLERGH and conservative politicians were determined to sabotage Obamacare even to the detriment of the citizens who elected them, so the difficulties the federal exchange site had at launch are an obvious result. Too bad only one side of the screaming arguments Peggy talks about in this column seem to have actually penetrated that brain fog.

Also Peggy, may we offer you some stories from people who were able to enroll in Obamacare and are even conservatives who are pleasantly surprised at what it does for their medical insurance coverage and costs? Or are you slipping into another opium coma?

The founder of McAfee slammed the system's lack of security on Fox Business Network, calling it a hacker's happiest nocturnal fantasy.

Oh, how did we miss Fox Business Network turning to this guy for the technologist perspective? Peggy, a paranoid libertarian who once moved to Belize in part so he could fuck teenagers in peace may not be the person you want to hold up as an authoritative source about anything.

From here Sister Margaret moves into her main point: that Republicans should push harder than ever to delay ObamaCare, to allow the administration to fix the rollout issues and “improve what can be improved.” Does anyone seriously think that a delay would be anything more than the GOP giving itself more time to repeal the law entirely, plus giving the party an issue to demagogue about for the year leading up to the 2014 midterms? But thanks for the advice, Pegs.

A delay would be an opportunity for the president to show he knows what's happening on the ground, a chance for him to be responsive…This would allow him to look like one thing no one thinks he is, which is modest.

Ah, it wouldn’t be a Noonan column without the gratuitous “the black guy is uppity” dog whistle. Newsflash: presidents are rarely modest. It takes too much work to get where they get, and anyone who wants to be a politician in this day and age probably has some sociopathic tendencies. Frankly, we think considering all the crap and resistance he’s gone through to muscle health insurance reform (and anything else) into law, President Obama has earned the right to brag a little.

Her column thus scratched out, rolled up and sent to the Wall Street Journal’s offices in a capsule tied to the neck of a carrier pigeon, Sister Margaret lay back on her daybed and looked out at the briliant blue sky. She felt spent, exhausted, like a woman at the end of a weeklong absinthe bender. This, she mused, must be what the average American feels like after wading through the Obamacare website. She raised her highball glass to toast herself and then dozed off, dreaming of sparrows.