Peggy Noonan Will Slur Through Her Prayers If She Wants To, Jerks! 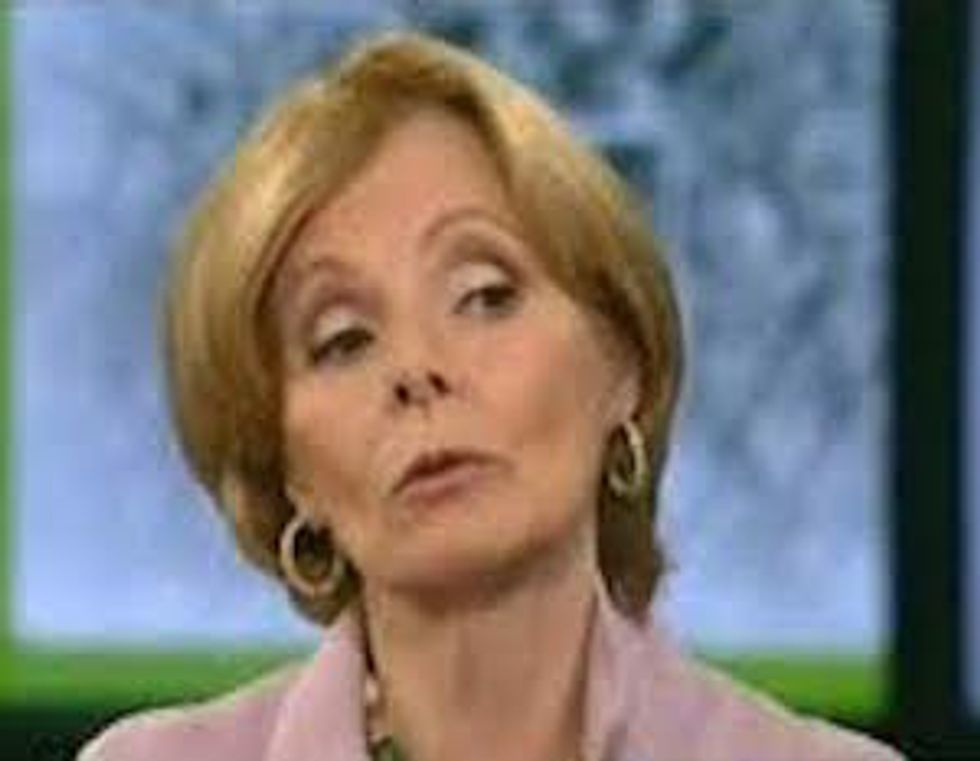 Another Thanksgiving had come and gone for Sister Peggy Noonan of the Order of the Absinthe Brain Fog, and she could not have been more grateful. At least what she could remember of it. There had been a relative’s apartment somewhere in the East Seventies, many bottles of wine, a long table with turkey and wonderful foodstuffs, surrounded by the younger generations – her nieces and nephews who gazed at her adoringly as she expounded on the topics of grace and manners and how President Obama lacked the robust Judeo-Christian spirit and foundation of prayer upon which this great country of America had been built.

“What’s that, Aunt Peggy?” her tiniest niece, eight-year-old Anna, had piped up. “We can’t hear you when your face is in your sweet potatoes.”

She had raised her head then, wiping the orange mush from her face, to see everyone staring at her. Prayer, she had tried to say, though her mouth and nostrils were clogged with melted marshmallows. Prayer is the only way we can be useful.

You can see a coarsening in how we respond and react on social media. No one feels ashamed to exploit the tragedy for political purposes even while it is happening.

It was possible, she supposed, that people on social media were simply angry about another mass shooting and venting their anger in a therapeutic way, which she found strange. Why couldn’t people do as her generation had once done: compress the anger that prayer could not soothe into a tiny ball of white-hot, seething rage and bury it deep down in their slowly rotting souls, where any flare-ups could be easily numbed by a diet of nightly glasses of gin with a splash of tonic? Could not this generational rage be confined to the pages of fiction pieces in the New Yorker as it had been when Yates and Updike were in their prime? That was the exceptional America she knew.

We are all free to say what we think, and must be, for without this freedom we will no longer be America. More on that below. But you always hope what is said will be constructive, helpful, maybe even at some point heartening.

Like prayer! That was helpful! She had prayed after the shooting on Wednesday, and now here she was writing her column on Thursday and there had not been another gun massacre since!

You have a responsibility as an adult to do your best in this area.

She couldn’t believe that the children at Thanksgiving dinner had rolled their eyes whenever she spoke, the disrespectful urchins.

The background is that Republican presidential contestants responded online to the shootings with the only helpful thing you can say—or do, frankly, from faraway—when a story like this occurs. “Praying for the victims, their families & the San Bernardino first responders,” said Jeb Bush.

This managed to enrage the progressive left. You can take your prayers and stuff ’em. The answer and the only answer to this tragedy is gun control, and if you’re not for it you’re not allowed to be part of the conversation.

Prayer being much like GOP efforts to get Donald Trump's popularity with the party's voters to fade: They were going to start working any minute now! Just a few more polls showing his support rising/a few hundred more Americans slaughtered by crazed people with semi-automatic rifles, we promise!

Hm, that line of thinking did not lead where she had hoped. How to save it?

Then the U.S. senator, Chris Murphy, came forward rather menacingly. “Your ‘thoughts’ should be about steps to take to stop this carnage. Your ‘prayers’ should be for forgiveness if you do nothing—again.”

A politician calling for action to try and solve a problem! Why she never! Didn’t Sen. Murphy of Connecticut who had seen two dozen constituents murdered at Sandy Hook Elementary three years ago know that his job was to keep a stiff upper lip and offer only condolences to the families of the dead? Steady on, America, she thought as her took her first gulp of Robitussin martini in several minutes, scarcely noticing the trembling that had begun in her hands since the last one.

Wow. You might think he was aiming this at President Obama, who when he was a popular president with an overwhelmingly Democratic House and Senate did not prioritize gun control.

Instead of prioritizing something truly useless like attempting to reform the country’s dysfunctional health insurance system, which all the Democrats in Congress had supported unreservedly because it was a party in ideological lockstep and has no pro-gun members whatsoever. Lyndon Johnson would have made it happen.

Of course Obama could have expected no help from Republicans when he tried to pass some modest gun control measures at a time when better than 90 percent of the voters supported them. He should have tried passing the Mandatory Post a Prayer on Twitter Every Time Some Gun Nuts Massacre Your Fellow Citizens Act. She was sure Republicans could have supported that, even if it was proposed by the hated Kenyan Usurper. Probably.

Here’s an odd thing. If you really are for some new gun-control measure, if you are serious about it, you just might wait a while, until the blood has cooled, for instance, and then try to win people over to see it your way. You might offer information, argument, points of persuasion.

Sure, people are dying by the dozens in spasms of terrifying violence, but must the people who want to try and stop it be so …so … uncouth when talking about it? A little grace is in order while you’re hosing the blood off the tiles!

I suspect part of the problem is that a number of the progressive finger-pointers do not really know what a prayer is. Maybe no one ever told them.

As does devising legislation to try to curb some of the terrible gun violence in the country. She frowned again at the roll of parchment in her old Underwood. Her logic today kept leading into these unfortunate cul-de-sacs. Time to find the big finish and get herself out of this logic trap!

Why doesn’t some thoughtful candidate on the Republican side address the issue of shaming and silencing? Why doesn’t someone give a deep and complete speech on what the First Amendment means, how it must be protected, how we pay a daily price for it in terms of anger, hurt, misunderstandings and crudity, but it’s worth it.

This turn to the issue of the First Amendment and why people honoring the maxim that “actions speak louder than words” should just shut up until conservatives decided a decent enough mourning period had passed to talk about gun control rationally was sure to make sense to the syphilitic, shrieking gibbon the Wall Street Journal kept in a cage in the newsroom and fed handed her column to for editing every week. It might not make sense to liberals, but that was only because the gibbon was smarter and always stopped flinging his poop when she ordered him to pray with her.

The censorship movement is radical. It is starting to make everyone in the country feel harassed and anxious.

As opposed to all the guns, which do no such thing. Was this another logic cul-de-sac? Who cared! She had some Christmas shopping to do. Perhaps she would treat herself to a new custom-made pew for her drawing room this year. The old one had been used so many times it was worn out, but it had been worth it to offer all those prayers that had made America a safer place.