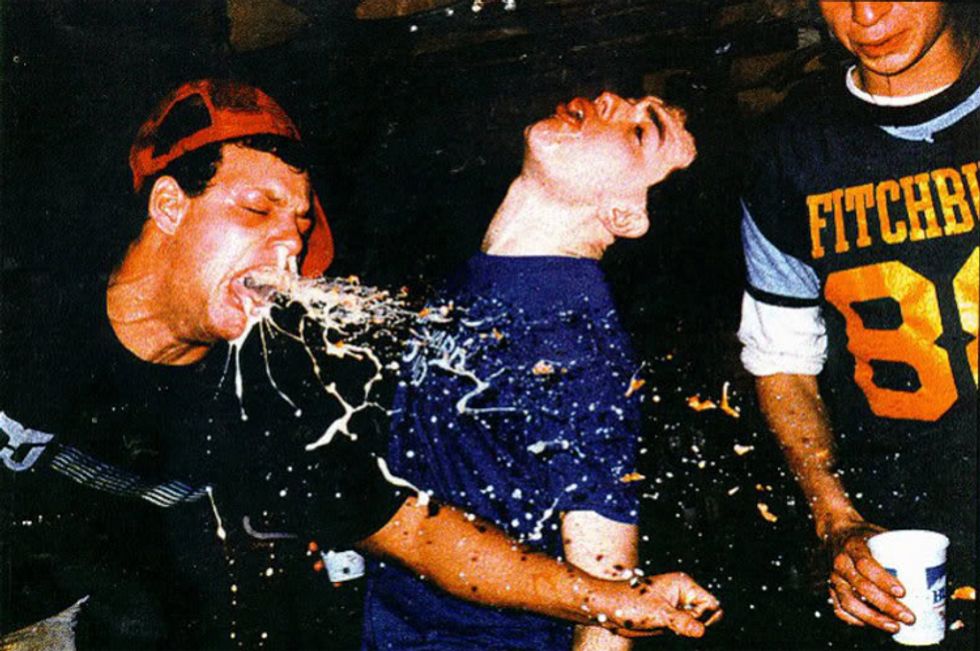 Jeez, America, you are so fuckin' uptight about Frat Bros Behaving Badly, you can't even let the Kappa Delta Rho brothers at Penn State enjoy their wholesome Facebook funtimes, which do not even harm anyone -- unless you're counting the unclothed, unconscious women featured in those private Facebook funtimes photographs, but why would you count them? Dumb broads shouldn't have been passed out if they didn't want their pictures taken, right?

Turns out, though, that the private online group of about 150 current students and alumni who enjoy pics of passed out naked chicks (plus hazing and drug sales, like that's even a crime!) and are now under investigation were just kidding around. OK, maybe not kidding around, exactly, but satiring around, at least according to this one KDR frat bro who can't believe how everyone is overreacting and also doesn't know what "satire" means:

It was a satirical group. It wasn't malicious whatsoever. It wasn't intended to hurt anyone. It wasn't intended to demean anyone. It was an entirely satirical group and it was funny to some extent. Some of the stuff, yeah, it's raunchy stuff, as you would expect from a bunch of college-aged guys. But, I mean, you could go on any one of hundreds and thousands of different sites to access the same kind of stuff and obviously a lot worse and a lot more explicit.

Sorry, yo, but "everyone else on the internet does it" is not actually a very good defense. In fact, it's a terrible defense. But it's still a better defense than claiming this "satirical" group was actually for Official Frat Bro Bidness:

Well, the site, first of all, was primarily used for communication for important fraternity business and so forth and so on. The questionable postings are single instances out of hundreds, if not thousands, of different postings that are related to stuff like community service to THON, which is our charity organization, to social events and so forth and so on. Once in a blue moon, there was a questionable post of this sort that everybody's now referring to … We obviously need a group to communicate. Some chapters use listservs, other chapters use Facebook groups, so it's not like, oh, this was a group that was intended for distribution of this kind of material. Not at all. This was a group intended for, right, communication within the fraternity.

But now, thanks to "the one kid who snitched out this group" -- and by the way, dude, your fellow bro thinks "it's a real disappointment" that you "went and did this" -- the chapter has been suspended and the everyone's getting, like, all mad and stuff. Even though it wasn't hurting anyone because it was supposed to be private. But now the police are involved, and some dudes might even face criminal charges for, you know, doing crimes. Guess this satirical stuff isn't so funny anymore, now that some people -- not the women posted online without their consent, but people who actually matter, like the bros -- might get hurt:

It is shameful to see the self-righteousness that has sprung from the woodworks in response to the alleged Penn State fraternity "scandal." Here's a quick reality check: everyone — from Bill Clinton to your grandfather to every Greek organization in the nation does the same old stuff, just as they have been for the entirety of human history. [...] The fire of indignant, misplaced self-righteousness that looks to ruin people's lives and unjustly ruin reputations is the abuse and violation that should be at the center of discussion, not the humorous, albeit possibly misguided, antics of a bunch of college kids.

Man, it would be so sad if some of these boys actually had their lives and reputations ruined just because of that one snitch who couldn't keep their harmless dirty little secret on the down low, plus that possibly illegal stuff, but come ON, that's just what you do in college.

In addition to the important lesson of not posting evidence of committing crimes ON THE INTERNET, the fraternity might want to keep its members from issuing statements and giving interviews to Philly Mag because, wow, anonymous KDR guy, you really are not doing a good messaging job on behalf of the fraternity. Unless the intended message is yup, you and your brothers really are a bunch of assholes, in which case, well done, brah. Well done.