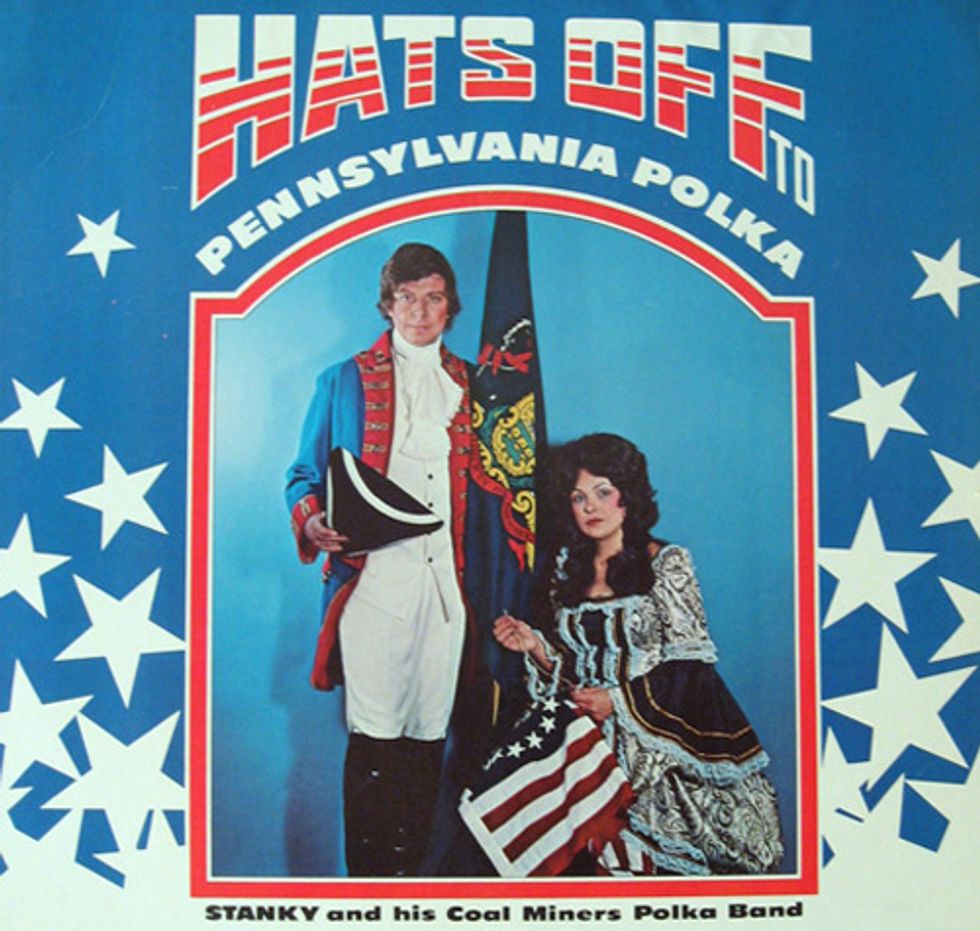 Guess which one's the loveable but doomed dark horse?

[wonkbar]a href="http://wonkette.com/600294/maryland-has-two-awesome-democrats-running-for-senate-can-we-have-both"[/wonkbar]Welcome back to our newish feature, our weekly countdown of U.S. Senate races, yes, even the ones where there's no real contest. But not this week! Last time, we looked at Maryland's primary between two ridiculously well-qualified Democrats; the primary is likely to decide the outcome of the general, because 1) Blue State and B) really lame Republican candidates. This week, we'll look at Pennsylvania's hot 3-way Democratic primary for the chance to unseat first-term Republican incumbent Pat Toomey, who won his seat in a squeaker of a 2010 election against one of the current Democratic candidates, former Navy admiral and congressman Joe Sestak. The other two Dems in the primary are Katie McGinty, former chief of staff to Gov. Tom Wolf, and Braddock Mayor John Fetterman, who looks more like a biker than a senator. With Pennsylvania having gone Democratic in every presidential election since 1992 and a chinchilla-headed wankstain the likely Republican presidential nominee, Democrats wanting to retake the Senate are optimistic Toomey can be given the heave-ho in November. Let's see who's hoping to benefit from Democratic presidential coattails!

Incumbent Pat Toomey is what passes for a "moderate" Republican these days. Despite his 2005 to 2009 leadership of the rightwing Club for Growth (which in return has been his top contributor), his firm opposition to abortion, marriage equality, and Obamacare, and his fetish for deregulation (especially of the banking and energy industries), he did at least cosponsor the failed 2013 attempt to pass universal background checks for gun purchases after Sandy Hook. That was also just about the only time Wonkette has taken notice of him, apart from a brief 2009 translation of a RedState call for a Republican takeover of the Senate into this memorable passage:

“Imagine a United States Senate with Michael Williams, Pat Toomey, and Marco Rubio. Now imagine Pat Toomey massaging your naked body with Skippy peanut butter, as Marco’s moist testicles rest on your face … We can make all that a reality.” [RedState]

[wonkbar]a href="http://wonkette.com/511138/senators-maybe-agree-on-gun-background-checks-nra-psychics-predict-that-shootings-will-still-happen"[/wonkbar]That one gesture toward defying the NRA still has the right angry at him, and it didn't seem to win him a heck of a lot of love from Democrats. This year, Toomey quickly signed on to Mitch McConnell's call to block any Barack Obama nominee for the Supreme Court to replace Antonin Scalia. After Obama nominated Merrick Garland, Toomey did agree to meet Garland "out of courtesy and respect for both the president and the judge," but insisted he would not ever allow a vote on the nomination, saying The People must have their say on the nomination, since the 2012 election magically didn't count. So, yes, bigtime moderate.

And now for your Democratic contenders, starting with Joe Sestak, the guy who's currently slightly ahead in the primary polls, but is not a popular guy with Democratic officialdom. He's also the candidate whose name makes him most susceptible to hilarious puns on the lizardmen from Land of the Lost, and if he wins the nomination, we promise to make further use of this photoshop job from 2010:

So, as Charles Grodin would ask Sestak if they were in a remake of Midnight Run, why aren't you popular with the national Democratic Party? Why? Just curious. For one thing, there's that 2010 loss to Toomey, which came after Sestak primaried Arlen Specter, who had gone to all the trouble of switching from the Republican Party to the Democrats so he'd have a better chance of holding onto his seat. Some Democrats are still mad about this: they'd told Sestak to let the old broccoli-haired party-switcher go unopposed, since it might have been nice to keep control of the Senate in 2010. There was even a minor kerfuffle over whether maybe Barry Bamz may have offered Sestak a nice job as Secretary of the Navy to dissuade him from a Senate run, in the finest tradition of horse-trading. But Sestak has what supporters call an "independent streak" and detractors call a "tendency to be a loose cannon," especially since, for his current campaign, he resisted hiring a campaign manager recommended by the party. Which leads to the worry that if he won't play ball on campaigning, then he might be a less than reliable vote in the Senate. There's a lot of inside baseball stuff that you can read more about at Politico if you're into that kind of thing.

Sestak doesn't deny that he's not a fan of taking marching orders from the party, but also points to his solid liberal voting record and his 100% voting scorecard from the AFL-CIO. When he served in Congress, he pushed for healthcare reform, crediting his military health insurance for helping his daughter survive brain cancer when she was four years old; his campaign website says he believes "everyone should have access to the same quality of care." On other issues, he has a 100% pro-choice rating from NARAL and a 100% rating from the Brady Campaign to Prevent Gun Violence. Leading up to the current Senate primary, Sestak also walked 422 miles across the length of Pennsylvania in 2015, because he could. His campaign website is awfully heavy on reminders that he was an admiral (for trivia fans, he was promoted to 3 stars shortly before retiring to care for his daughter, but had not served long enough at that rank for retirement, so his retirement status is as a 2-star admiral).

Katie McGinty is running closely behind Sestak in polling, but is benefitting from major endorsements and spending by outside groups. She's got the support of EMILY's List, the Service Employees International Union, and the Democratic Senatorial Campaign Committee; the three have combined to spend nearly $3 million in support of her. She also has a long list of big names in the party endorsing her, including Senate Minority Leader Harry Reid, plus these two guys named Barack Obama and Joe Biden. Old Handsome Joe said very nice things about her:

“Pennsylvania is near and dear to my heart, and there is no one better to represent its working men and women in the Senate than Katie McGinty." Citing her blue collar background in Philadelphia -- daughter of a restaurant hostess and a police officer -- he said, "she knows what it means to work hard, struggle to make ends meet, and build a better life, one day at a time.”

McGinty's campaign, chaired by former Gov. Ed Rendell, hopes the endorsements and cash will help buy enough advertising to push McGinty past Sestak; the polling gap between them has closed in the last month. Of course, now both Sestak and the third candidate, no-real-chance but awfully cute bear-man John Fetterman, can credibly argue that McGinty is the "establishment favorite." Oh, look! Here's one of her ads, too:

In addition to serving as Gov. Wolf's chief of staff, McGinty has a long career in environmental affairs, having served as an advisor on the environment to Bill Clinton and as head of the Pennsylvania Department of Environmental Protection. According to her campaign website -- which looks a lot more professional than Sestak's, a factor we wish we didn't notice quite so quickly because it may mean we're shallow -- she supports raising the national minimum wage to $15 an hour, transitioning to clean energy jobs, strengthening the ACA, and all other good things that Democrats like.

And then there's the weirdo beardo uber-outsider John Fetterman, who doesn't have a chance in hell but is clearly enjoying running for Senate as a 6-foot-8 guy with a shaved head. He hopes to become the most-tattooed member of the U.S. Senate: on one arm, Braddock, PA's Zip code (there either to jog his memory or to prove he'll never truly leave) and on the other, the dates of murders in the city during his tenure. An endorser of Bernie Sanders, Fetterman has terrific ideas and no chance of winning, but at least he's a serious outsider who wants to get attention paid to his top issues: income inequality and the challenges of post-industrial cities. He even did a TEDx Talk on the latter. (Update: as alert commenter Latverian Diplomat points out, TEDx talks are like a minor league franchise version of TED. The more you know!) After college, volunteering as a Big Brother to a child whose parents both died of AIDS opened his eyes, he said in an interview with The Nation:

﻿ I became preoccupied with this concept of the random lottery of birth. Why was I born into this incredibly privileged and comfortable existence, and this child, through no fault of his own, was an AIDS orphan by 8 and a half, and was living in an incredibly dangerous section of New Haven? All of this, of course, eight blocks away from one of the world’s most elite universities.

As mayor of Braddock, a former steel town whose population is 80% African-American, Fetterman improved public safety, bringing down crime rates, "﻿but we did it without getting any police complaints or anything like that. I tell people I’m pro-police but I’m also very pro–Black Lives Matter. They can’t be mutually exclusive." And he's a firsthand beneficiary of the Affordable Care Act: The job of mayor didn't come with health insurance or a big salary, so until Obamacare came online, he couldn't afford health insurance. Go read the interview. He won't be in the Senate, but he's a hell of a guy.

We like all three, especially the one who's guaranteed to lose the primary but continue to be a noticeable progressive voice. If you're really desperate to see these three debate, here's a linky to their most recent one. We're looking forward to our Pennsylvania Wonkers filling in the gaps here, too; just remember not to bludgeon each other, OK? Regardless of who takes the April 26 primary, we think either Sestak or McGinty can beat Toomey, who had his 2010 Tea Party moment and can go be a lobbyist now.

Have some spare ducats, florins, or even American Dollars you'd like to contribute to a worthy Democratic candidate for Senate? Contribute to Joe Sestak right here, or to Katie McGinty's campaign here, or drop your tattoo money in John Fetterman's donation jar here. You can also support quality senatorial reporting right here at Yr Wonkette!