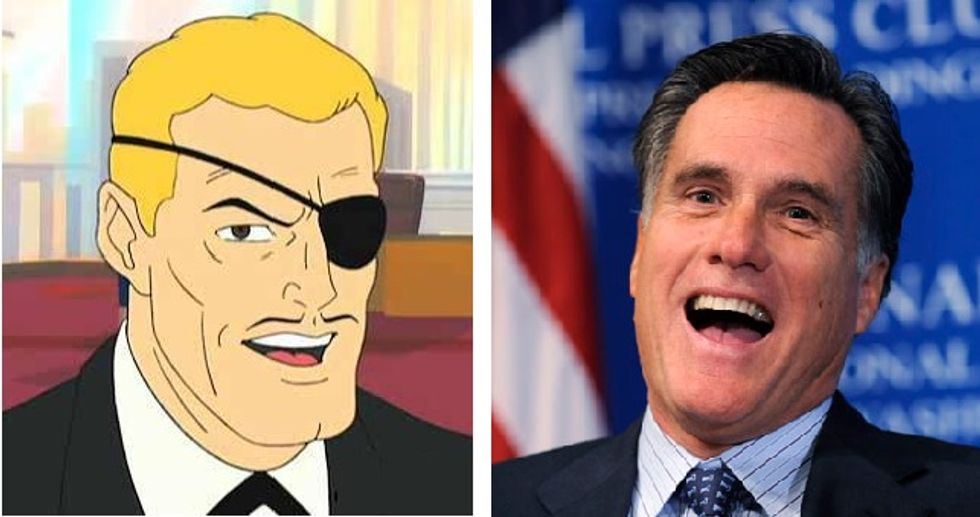 Usually when a candidate for president gets crushed in the election like a vat of grapes in an I Love Lucy episode, he has the decency to disappear from public view, maybe take up a cause like building houses for the poor (Jimmy Carter) or global warming (Al Gore) or returning to the Senate to yell at the person who beat him to get off his lawn (John McCain).

But that is not the case with his most mighty lordship Mittens Wellington Lipitor Mouthwash Wot Wot Romney XL. Mitt has spent the last two years bad-mouthing President Obama, pretending he might want to lose a third presidential election in 2016, and trying to recast his image from robotic weirdo to avuncular, twinkle-eyed, slightly dim grandpa who nevertheless is outraged, OUTRAGED at the way the president still refuses to listen to his betters.

For example, Mitt spent this past Sunday talking to Bob Schieffer on Face the Nation. He used his time to excoriate President Obama for not wanting to send troops back to Iraq to fight ISIS and also for not realizing he lost this last election that he was not running in because “the American people spoke loud and clear.”

The American people also spoke loud and clear in 2012, and yet we still turn on the TV and see Mitt Romney giving his stump speech. Funny, that.

After pretending CBS’s audience still gives a shit about anything he says, Mitt went off to Brigham Young University to speak to an auditorium full of Mormons, which must have been a treat. Let’s skim through this speech and see what he had to say.

Honor to be here cuckolded husband joke remarkable journey running for president American people are awesome cuckolded dad joke Tom Brady name drop to show he is aware of the sport of foot-ball, humblebrag about the time a masseuse said he has strong legs…

Ewwwwwww. And we were about to eat lunch. Let’s get through the rest of this before it destroys our appetite forever.

An audience member at a campaign stop gave me a letter advising me to stop shaving for a few days to look more sexy.

Aaaaaaand that’s all we need to hear from Mitt today. The rest of you are free to post your hot “Unshaven lumbersexual Mitt Romney sexxx fantasies” in the comments that we do not allow.