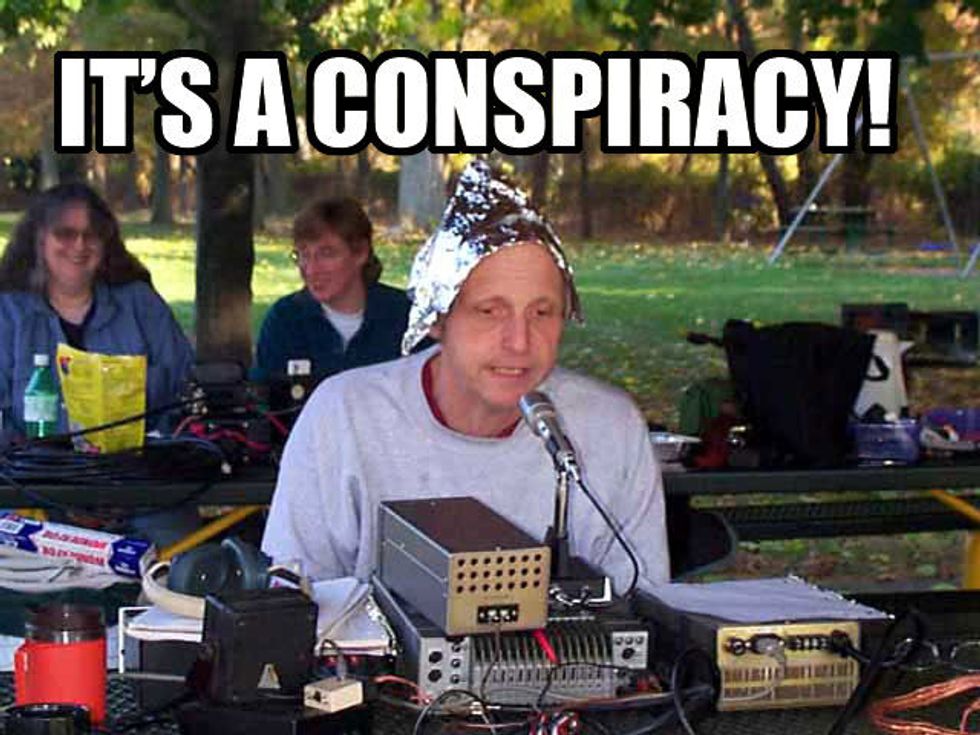 Fox News's anti-Christian, pro-butt-sechs bias has been exposed by a handful of brave truth warriors, and we now have completely verifiable and not at all made up evidence Fox has been engaged for years in a massive gay conspiracy that goes all the way to the top! How has this dastardly organization conspired for years to push the gayness onto your children and unsatisfied wives? Let's Wonksplore.

On Saturday, Peter appeared on the internet teevee show of one Cliff Kincaid, president of America's Survival Inc. Your correspondent would like to point out just how many wingnut "organizations" seem to consist of one dude and an internet connection. It's uncanny. LaBarbera and Kincaid went off on Fox News host and part-time JC Penny mannequin Bret Baier for canceling his appearance at an upcoming conference for "Catholic businessmen" called the Legatus Summit, and all just because the group happens to have some perfectly normal beliefs about gay conversion therapy -- wait, huh?

Turns out Legatus is not just a retreat for Catholic businessmen to come talk business and flagellate each other. It's actually a virulently anti-gay organization that believes things like this according to official club literature:

There are many reasons why people suffer from SSA disorder [same-sex attraction "disorder"]. Some “discover” this tendency within them. Others grow into it through pursuits of pleasure or experimentation. Some use it to punish themselves or others. Whether the disorder has some deep, unknown roots over which one has virtually no control, or whether it’s a developed disorder resulting from bad choices, it leaves an individual disposed toward activities and a lifestyle that are dangerous — physically, emotionally and spiritually.

You must be into some pretty kinky shit to believe homosexuality can be used "to punish [yourself] or others."

Bob Newhart canceled his speaking engagement with these looney tunes last year after their beliefs came to light, and this year Lieutenant Dan actor Gary Sinise did it too! When Bret Baier announced that he was not going to attend the summit because even evil has standards, this was enough to send LaBarbera into a frothing rage.

Old Peter has previously asserted that Fox News has been guilty of "pro-homosexual propaganda," by which he means they didn't constantly have him on to talk about how fiendishly naughty gay stuff was every hour of the day. Peter's nipples aren't going to harden themselves, Fox! Gotta help a brother out.

LaBarbera's host, Cliff Kincaid, piggy-backed off Peter's froth rage by dragging open closet-case Shepard Smith into the fray, displaying a masterful use of the typical Fox technique of "we can't prove this speculation is true, but let's assume it is for now":

For what we know, this guy [Jeremy Hooper of Good As You] or one of his friends may have called Shep Smith, and said, "Hey Shepard, you know your buddy Bret Baier is speaking at this anti-gay conference..."

Emphasis ours, of course. The implications of what he's saying are pretty amazing, such as that every gay person knows every other gay person (must come with the agenda handbook), that Shepard Smith has magical sway over Roger Ailes, or even just that Roger Ailes might be a decent human being for once in his life and actually do the thing they're accusing him of doing. We won't hold our breath.

Now you might be wondering why Kincaid and LaBarbera are so irked by the idea that Bret Baier was arm-twisted into not coming to this rather obscure wingnutpalooza for something other than his stated reason of "dude, these people are bonkers." Let's follow the money!

Bret Baier and Gary Sinise were to be the high-profile (snort) speakers at this Legatus conference. Legatus as an organization sponsors Peter LaBarbera's Americans for the Truth about Homosexuality, and cites them as an authority on the subject constantly in club literature. Very interesting. In turn, Peter LaBarbera wrote a 92-page "report" detailing the liberal bias of Fox News, a 92-page report that is being published by none other than...Cliff Kincaid's America's Survival Inc.! WHAT?! Did we just blow YOUR MIND?

LaBarbera and Kincaid might want to cool it a bit on accusing other people of conspiracies, especially when it probably wouldn't take much more digging to to prove these two shot JR.