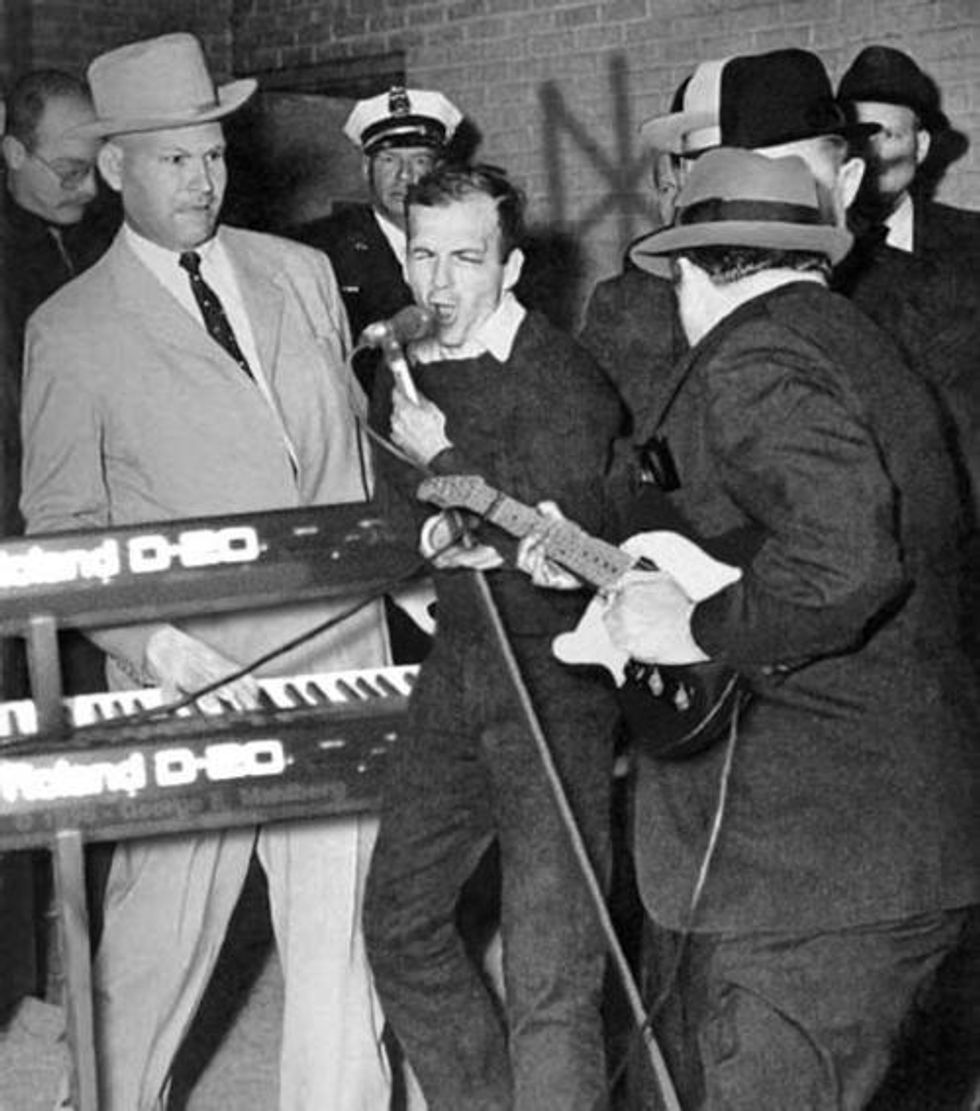 We can think of about nine bajillion reasons Ted Cruz shouldn't be president, but here's one we hadn't considered: Maybe his dry-drunk daddy was part of a CIA plot to assassinate John F. Kennedy!!! The shocking conspiracy theory comes from the fertile imagination of a guy named Wayne Madsen, who is only asking: Was Ted Cruz's father involved in the assassination of President Kennedy? Let's examine the compelling evidence! For one thing, Rafael Cruz Sr. was Cuban, and lived in Dallas and New Orleans. For another, Lee Harvey Oswald was photographed with some Cubans in New Orleans, and then moved to Dallas, where he shot (or was the patsy blamed for shooting) JFK! Back and to the left, sell the movie rights to Oliver Stone, CASE CLOSED!

Or as Madsen puts it in his Wayne Madsen Report (WMR), so it sounds slightly less like completely tenuous, evidence-free speculation:

Based on the presence of the elder Cruz, an anti-Castro activist, in Dallas and New Orleans before the November 22, 1963, assassination of President John F. Kennedy, there is a strong reason to believe that Cruz was associated with Central Intelligence Agency's anti-Castro operations.

Furthermore, a Cuban hired by alleged JFK assassin Lee Harvey Oswald and who bears a striking resemblance to Cruz is seen in an iconic photograph of Oswald and a group of Cubans Oswald hired who were distributing "Hands off Cuba!" pamphlets in New Orleans in the summer of 1963. The photo of Oswald and other Cubans he hired for the Fair Play for Cuba Committee was taken outside the International Trade Mart in New Orleans on August 16, 1963. WMR has been informed by a source that the individual to Oswald's left is none other than Rafael Cruz. The photograph at the trade mart was favorably compared to a 1954 photograph of Cruz attached to an official Cuban Ministry of Education document.

Just look at the astonishing similarities! Both photos are in black and white, and show a guy with dark hair!

Notice also the presence of a middle-aged Sonny Bono (white shirt, to the left of "Cruz"), who somehow was in New Orleans in 1963. Proof that time travel was involved in the conspiracy!

Madsen says the guy in the New Orleans photo is a dead ringer for the elder Cruz, who since 1963 has grown much larger, sticky-outy ears and a wider nose -- both of which he also had in that 1954 photo, but cleverly hid in the 1963 photo:

Even more evidence that the "man in the middle" has to be Rafael Cruz Sr.? That person has never been identified:

G. Robert Blakey, the Special Attorney at the Department of Justice in the Organized Crime and Racketeering Section from 1960 to 1964 and the chief counsel of the House Special Committee on Assassinations, affirmed that the men seen with Oswald passing out pamphlets at the trade mart on August 9 were never identified. In fact, Blakey told PBS's Frontline in 1993, "when he [Oswald] distributed the literature, one of the two people was hired. The other person we've never been able to identify."

If he was unidentified, he could be anybody! So he really could be Rafael Cruz Sr.! Also, just look at this incredibly suspicious timeline (bold in original):

In 1957, Rafael Cruz, a former salesman for the U.S. intelligence-linked RCA Corporation, left Cuba for the United States. Cruz claims he fought with Castro against the fascist government of Fulgencio Batista but soured on the revolution. However, Cruz left Cuba two years before the Castro revolution.

Cruz was in New Orleans during 1963, the year that New Orleans District Attorney Jim Garrison claimed his city was the focal point for the plot to assassinate President John F. Kennedy. The plot involved a number of Cuban exiles. Accused assassin Lee Harvey Oswald claimed, as part of his "fake defector" persona developed by the Central Intelligence Agency, to be a member of the pro-Castro Fair Play for Cuba Committee.

It all adds up: a whole bunch of tenuous connections (surely everyone who worked for RCA in the '50s was a spy), and the guy lived in New Orleans and Dallas. It's really uncanny! What are the odds that anyone else would have lived in two major southern metropolitan areas around the same time that Oswald and others supposedly involved in the massive CIA conspiracy did? All you need is a little Occam's Duct Tape to hold it all together.

Besides, as No More Mister Nice Blog notes, this Wayne Madsen guy has a sterling record of discovering uncomfortable truths that THEY don't want you to know. He revealed that Israel and Saudi Arabia did 9/11 together, and is one of the key proponents of the "Barack Obama is a Gay Homosexual" theory, and also claimed that he had proof of Obama's real Kenyan birth certificate. So this is clearly a guy who knows things.

The real question is, why hasn't the Trump campaign hired him as an advisor yet?

A note from your editrix: Dok has neglected to include in this post the SCIENCE FACT that Woody Harrelson's dad -- who died in prison after executing a judge -- was one of the "three tramps" who did ... something ... and then were shooed out the back of the Dallas police department. Also he did not even GOOGLE "george h.w. bush killed kennedy." But I bet you just did! See you in three days or so!

Ted Cruz Did Not Put His Extramarital Penis On DC Madam Ladies, He SWEARS!

Also, Wayne Madsen was the expert interviewed by the National Enquirer who said Ted Cruz probably banged all the DC Madam's call girls, which Dok did also not mention.