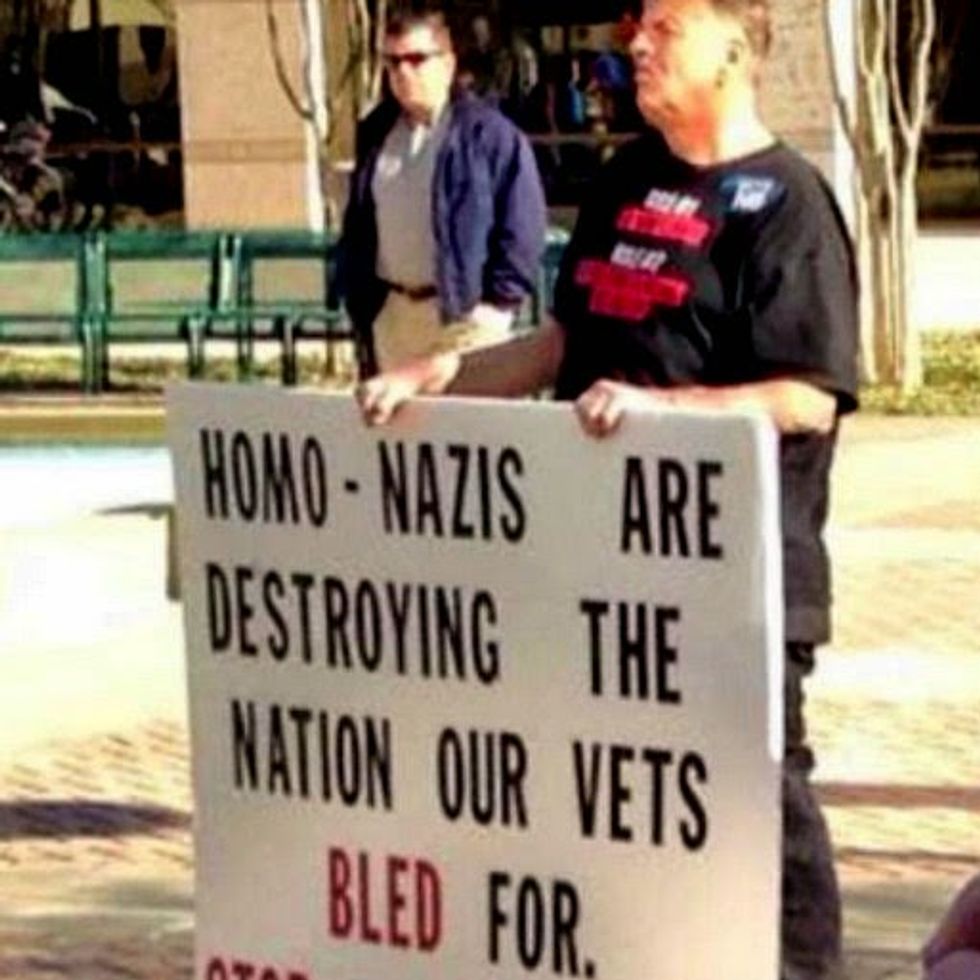 Last night, the Southern town of Charlotte, North Carolina, did a real big stupid, failing to pass an anti-discrimination ordinance that would add LGBT people to the list of protected groups. Wingnut opponents of the ordinance, of course, were most worried about the possibility that somewhere, somehow, a transgender person might be out there responding to the call of nature, and not even ashamed of themselves for it. This is an outrage, because how dare they, despite what you have heard in children's books, NOT EVERYBODY POOPS, especially not transgender people!

Anti-abortion freakshow Flip Benham, failed father figure to the hot wanna-be HGTV Aryan bigot twins who look like something out of a Bruce Weber photo shoot, was on hand, and demonstrated how to solve this problem. First you see a trans kid, a minor child, walking out of the bathroom, and then you scream at her and call her a pervert, that's what the Bible says to do when people are coming out of the bathroom in ways you are pretty sure are sinful:

Qnotes has received two reports of confrontations of transgender people using the government center’s bathrooms, including one confrontation in which anti-LGBT street preacher Flip Benham, once convicted of stalking a local abortion doctor, confronted a 17-year-old transgender girl.

Olivia, 17, told qnotes she went to use the women’s restroom on the second floor of the government center. Inside, everything was fine and she heard no complaints from the adult women in the restroom. But when she came out, Olivia says a man confronted her, called her a “young man” and said she shouldn’t have been in the women’s restroom.

Benham called the teenager a “punk” and a “pervert” and claimed there were children in the restroom.

“He was in the bathroom with the kids. That boy was in with our girls,” Benham said, when asked if he thought it was appropriate to confront a 17 year old.

Benham is completely sane, of course, so he must understand something about what happens when transgender people go to the bathroom that we don't. We KNOW Benham is completely sane, because of his history, which includes such greatest hits as heckling gay weddings, having public wakes for 'borted fetuses, and invading churches in New Orleans what don't hate people enough to spend eternity in heaven with our loving God.

So, the Charlotte city council tried to appease these dimwitted fools by going ahead and throwing trans people under the bus -- removing protections for trans folks and keeping the bill just "LGB" protections, as God intended -- and it still failed in a 6-5 vote, partially because two of the councilcritters refused to support a bill that doesn't include everyone. That happens sometimes, and hopefully this will come back up again later and after the eleventh or twelfth try they will get it.

If you are not familiar with the wingnuts' argument against trans people in the bathrooms, or you can't put it together in your mind using your Logic Skills, it goes like this: If transgender people are able to use their preferred bathrooms, then creepy straight men will fake being transgender -- LIKE THEY ALWAYS ARE DOING -- and hang out in the ladies' room and leer and perv around. We are waiting for documentation that this is an ongoing problem in Obama's America, but we are sure it is, the Christian Right never just cold fuckin' lies about stuff, it's against the Bible. Oh, except when they do, actually lying for Jesus is a well-documented practice of the Christian Right. It's just like the part of Islamic law that says you can lie for the faith, except it IS NOT EITHER like that, wingnuts get mad when you say that.

The hearing over the ordinance itself was not without its moments of joy and Christian Logic, like a guy who reportedly sang a song about how, on farms, roosters and stallions can't get anybody pregnant without hens and mares to put the baby animals in, and due to this Science Fact, God Hates Fags and NO TRANSGENDERS EITHER. Also, too, the guy pictured above spoke very passionately about how if some MOOOO-lester hurts his eight year-old grandbaby, somebody's gonna be A-HURTIN'! Which, of course, nobody remotely supports any Mo-Lester A-Hurtin' His Grandbaby bill, people just have to pee, but that's what happens when you let the Christian Right participate in an adult discussion, things get really stupid, really fast.

Here, enjoy yourself a nice highlights reel of wingnuts losing their minds over other people's private bathroom habits, and then if you're not completely ready to mainline Drano at that point, check in with Tucker Carlson, he has a history with dick-checking LGBT people in bathrooms.