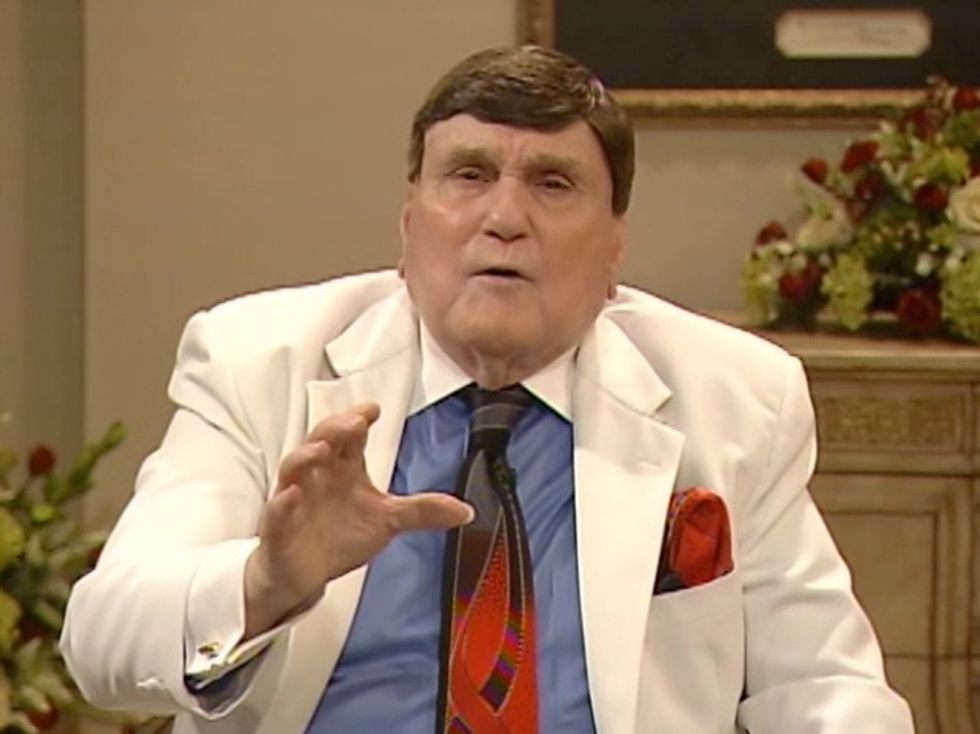 It's been a while since we've heard from the faith-healing ministry leader and televangelist Ernest Angley, who was also the the real-life inspiration for Robin Williams's classic "Reverend Earnest Angry."

Until 35 years later, when Monday we read that Rev. Angley is doing his very best to out-Bake Jim Bakker and Out-Swagger Jimmy Swaggart. Those chumps may have been satisfied with mere sexxytimes shenanigans and fraud (Bakker), and sad masturbatory prostie visits (Swaggart), but by Crom, no way were such penny-ante scandals going to be enough for Ernest Angley. No, he's going to close out his 60-something-year career with accusations of full-blown cultism, complete with creepy control over his flock's sex lives -- forcing men to have vasectomies and women to have abortions -- and to top it off, several years of unwanted laying on of hands on a former pastor and allowing sexual abuse of boys in the church, allegedly.

All the super-creepy news is coming out this week in a six-part series by the Akron Beacon Journal. In the first part, on Sunday, the paper began to print the fruits of its interviews with 21 former members of Angley's Grace Cathedral in Cuyahoga Falls, Ohio. Some of the former church members had a recording of a church service where Angley explained that while he might have been nekkid with some fellas, and sure, he might have taken a good long look at their Rods of Correction some, he is definitely not some kind of sex pervert, for heaven's sake:

“I’m not a homosexual. God wouldn’t use a homosexual like he uses me. He calls me his prophet, and indeed I am,” Angley explained. “They called Jesus a homosexual, did you know that? And still do. Because he was with men.”

As for the claim that Angley encouraged men in the church to have vasectomies, he said that he had “helped so many of the boys down through the years.”

“They had their misgivings,” he recalled. “Sure, I’d have them uncover themselves, but I did not handle them at all.”

“And I would tell them how that would work. And they’d have to watch it. I’d have some of them come back to me that I felt needed to. And I would tell them, I would look at them, their privates — I, so I could tell how they were swelling,” the pastor told the congregation. “I was a farm boy. We thought nothing about undressing. We didn’t know about homosexuals. We talked about women.”

And let's just be completely clear on this: it is definitely not gay if you talk about women. Also, something about balls not touching, as we understand it. But totally consistent with being a homosexuality-is-hellfire preacher, that's for sure. How can you help a troubled man whose balls you have not beheld?

And then there's the creepy lording over the congregation members' sex lives: There's Becky Roadman, who left last year, and explained “none of us have kids because he makes all the men get fixed ... You’re not allowed to have babies there.” Several escapees -- that doesn't sound too dramatic -- said that Angley pressured women to have abortions against their will, so maybe there is something to those crazy proposals to outlaw "coerced abortion." It just needs to be enforced against pro-life preachers:

One of those who left, Angelia Oborne, said that Angley advised a friend to think of the fetus inside her as “a tumor.”

“She was four months pregnant and she sat in the [abortion clinic] waiting room and told her baby that she was so sorry that she was doing this,” Oborne said. “I know another girl -- she won’t come forward -- but she was forced into having four abortions.”

But there was a really good reason for the forced 'bortions and 'sectomies! If people had kids, that would take their time and money away from the church, which demanded all their attention so they could do God's work on Earth and keep Angley's private 747 flying to missions in Africa, duh.

Monday's article in the series focused on the allegations of sexual abuse by members of the church. Shane McCabe says that he was sexually abused at the age of 15 by a "close Angley associate," and Angley completely ignored McCabe when he finally told Angley:

He asked if I had told anybody. I said no. He said, "Let’s keep it a secret. This is the way we need to handle it because God’s mercy is great."

Angley told the Beacon Journal, when asked about McCabe's allegations, “I don’t think there was anything to that.” And really, why wouldn't you believe him? Dude was famous enough to be made fun of by a major comedian in the '70s.

Just to make you choke on your morning coffee, we also find out that another church member abused McCabe’s future wife, Kim, and neither Kim nor Shane told each other during the early years they were dating. Then, after they spoke up, a friend of Kim's revealed that she too had been abused in the church, by yet another adult. And all three, or their parents, had been completely blown off by Angley, who had good Christian congregants to protect, and so it was vital not to make a fuss.

Oh, and then there's the woman whom Angley encouraged to write to a prisoner, doing the whole mercy-to-prisoners thing that Christ was so big on, and after the prisoner was released, Angley encouraged her to marry him. Angley just didn't quite mention that her new husband had been convicted of repeatedly molesting a 5-year-old-girl. We're pretty sure Jesus didn't demand that level of personal involvement with prisoners, though of course everyone reads Scripture a little differently.

All in all, we're pretty sure we prefer Robin Williams's sermons.