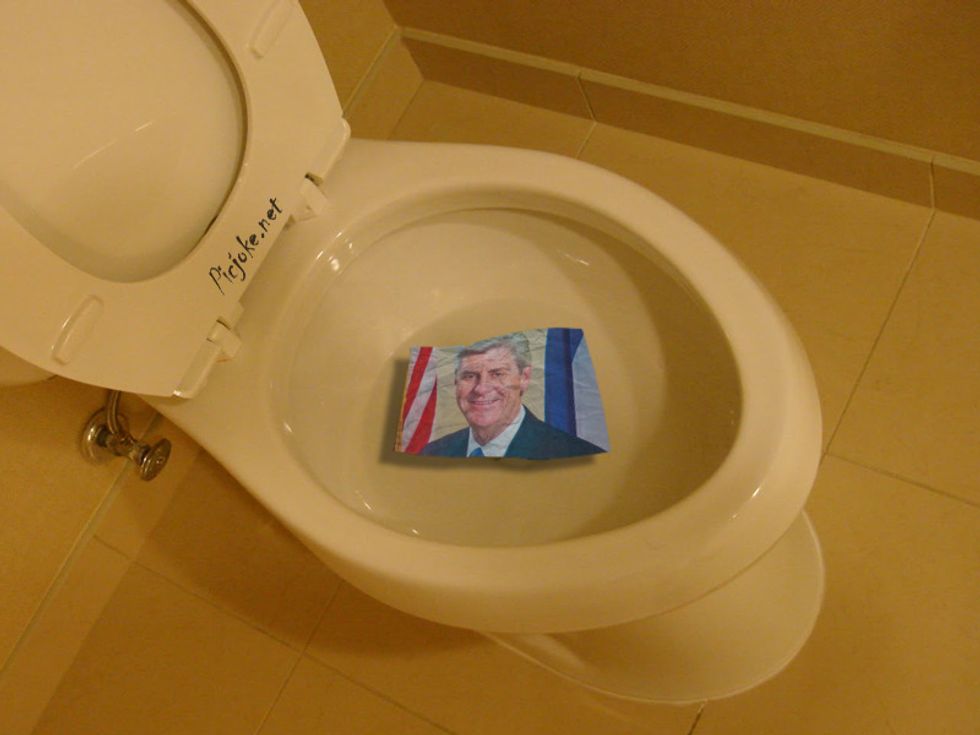 Mississippi Gov. Phil Bryant had a chat with Tony Perkins of the Family Research Council on his "Washington Watch" program this week about how totally unfair and mean it is of the ACLU and everyone in the rest of the country to bully him and his state just cause he signed a law allowing good Christians to refuse service to LGBT people and anyone else who offends their ideas about gender and marriage!

“I mean, they cherry-pick these issues," Bryant said of the ACLU's lawsuit against the state. "If they had any integrity at all, they would say, ‘We understand Mississippi is actually trying to make sure that Christians and people of other faiths are not discriminated against.’ It is a nondiscriminatory law. It prevents discrimination against simply that segment of the population that has a deeply held religious view about marriage.”

It is really hard for them, you know, being discriminated against simply for wanting to have businesses in which they get to discriminate against a segment of the population they do not care for. Perhaps we should show them some empathy and understanding of their ways by all moving to Mississippi and opening up businesses in which we either refuse to serve God-fearing Christians or make them use separate bathrooms for fear they will annoy other customers by proselytizing to them?

Bryant also advocated for his "dear friend, Pat McCrory" who has been shoved into a locker and swirlied over his beautiful law preventing trans people from peeing in the correct bathroom.

“And we’re criticized, we’re threatened, we’re bullied, we’re told by corporations that we’re doing the wrong thing? Where on earth have we come to simply say, ‘I do not wish my daughter in her school or in her university to have to have a male in the shower and in the dressing room and in the restrooms.'"

That is of course very different from criticizing, threatening and bullying trans people and telling them that they are doing the wrong thing by having been born with the wrong equipment. Because this is the United States of America and you are only allowed to criticize, bully, and tell people they are wrong if they are liberals, or if they are doing sex things you don't like.

However, Governor Bryant believes that not only is the rest of the country is on his side, but that they have not taken elementary school geography classes and thus agree with him that Hollywood and other "more liberal areas" are in a different country altogether. They understand that Mississippi -- whose state flag incorporates the Confederate flag as a reminder of the time they tried to secede in order to protect slave owners from discrimination from more liberal areas -- is the Real America. Even though they tried not to be that one time.

“I think the rest of the nation is beginning to wake up and say, ‘What world do they think we’re living in? This is not Hollywood, this is not more liberal areas, this is America, where common sense still prevails."

Following this, he gave a long list of the ways Mississippi was found to have been on the right side of history concerning social issues. Ha! Kidding! He did not do that at all.