Phil Robertson Wants To Be Trump's Spiritual Advisor, Has Some Real Neat Ideas 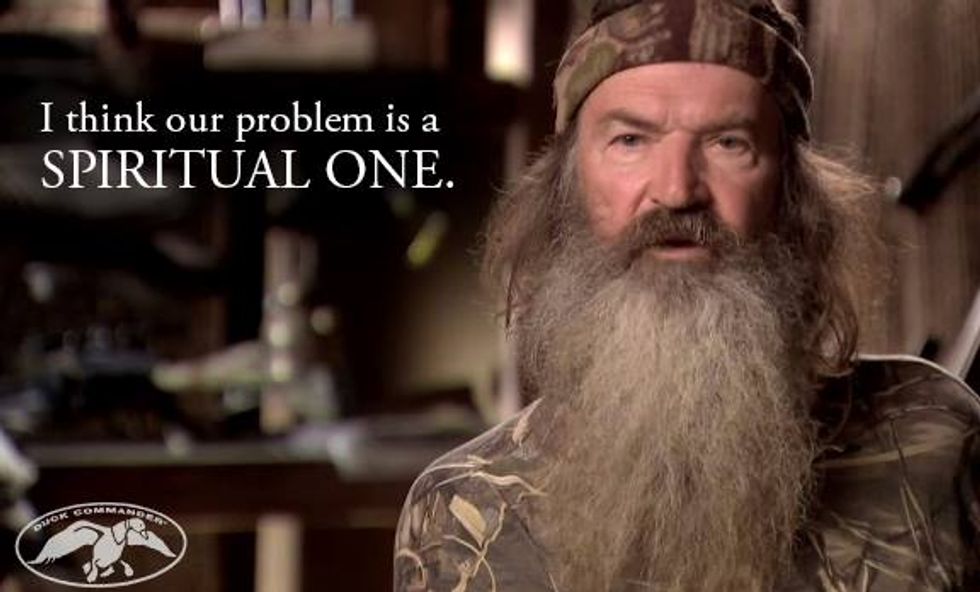 Phil Robertson, the dry drunk tsar of the Dynasty of Duck, stopped by your boyfriend Gordon Klingenschmitt's "Pray In Jesus Name" variety hour for an interview recently, and revealed his plans for getting Donald Trump's spiritual house in order, plus loads of other interesting things.

While Robertson was initially a Ted Cruz guy, he has since jumped on the Trump Train, due to not liking Hillary Clinton. Trump isn't perfect, Robertson admits, and he doesn't know his record, but he does have some ideas about how he could win. The main thing, Robertson says, is that he would have to convert to Christianity. Which may come as a surprise to Trump, who considers himself a very religious man these days.

Robertson says that if his fellow reality star were to find Jesus, then all the bad, creepy, and scandalous stuff he'd ever done wouldn't count anymore, and no one could call him on it. LIKE MAGIC!

"The ultimate for America would be we convert Mr. Trump. That way, all the dirt they're gonna drag up on him and all the whatever, indiscretions he's been involved in and the sins he's committed, if he but be born again, he could then tell them, 'That's the old me, I've been born again, this is the new Donald Trump.'"

WOW! Maybe all the politicians should just do that, right? That way, no one would ever have to be judged on their actual record and life's work ever, and they could just be a new person each election!

"I can see it now, Donald Trump and his cabinet, there's old Newt or some one of those guys that get in there, or Sessions, and the camera keeps panning over and then they get to me and they say 'And this man is his spiritual advisor' and I'm sittin' there. Now that would send a shockwave through America! And they say, 'the left-wingers would be jumping out of buildings."

Robertson must be really gunning for the job, as this is the second time he has shared that beautiful fantasy with the world.

Now, given that Trump already has so many wonderful spiritual advisors, from that dude who can stop tsunamis with his mind to that lady who will sell you magic beans that turn your dead relatives into zombies, what will Duck Dynasty guy bring to the table? Well, not only is he a deeply spiritual man, he's also got some great ideas about foreign policy, which he brought up earlier in the program.

You see, Robertson is pretty sure that we could stop ISIS from doing terrorism to us... if only abortion were outlawed.

So they kill us, we kill our own children. You're like, 'Hmm... we lost our moral high ground.' If we could have stood there and told them, 'No, to us life is precious. We shouldn't kill each other.'"

Are they saying that? Really? Because it sure seems like the whole reason terrorists kill people in order to make whatever point they are trying to make is specifically because it is a horrible and awful thing to do to people. Otherwise, they'd send us an Edible Arrangement or something. It also seems highly unlikely that they would concede the moral high ground to us were we to ban abortion, or do anything for that matter other than convert to Islam and join up with them.

But sure! Sure. Maybe Phil Robertson should be in Donald Trump's cabinet. Him, a couple Real Housewives, a Kardashian or two, Honey Boo-Boo and that Chad guy from this season of The Bachelorette, and perhaps even "Rodeo" from Rock of Love. Might as well just lean into it!